Students of Lisa Phillips’ fall 2015 Literature of Journalism class were asked to interview everyday working people about their jobs, and frame the first-person commentaries in the style of Studs Terkel’s book “Working, People Talk About What They Do All Day and How They Feel About What They Do.” Subjects include an emergency medical technician, a hairdresser, a breastfeeding consultant and a local business owner.

“My name is Serina Bass.

I was raised in New York City. I moved here, [to Esopus,] when I was 12. I live three miles up the road.

In my fifth grade slam book, I wrote that I wanted to be a model, an actress, a singer and a beautician. I spelled it wrong, but that’s what I wanted to be. One out of four isn’t bad, right?

My parents owned businesses in the city. My mom owned a flower shop in Park Slope, Brooklyn. My dad owned a deli in Manhattan, across from the Federal Building. I used to take the train in and help them but my first job was at McDonald’s.

I took cosmetology during my junior and senior year of high school, at the vo-tech center. My teacher was an old Jewish guy. Some girls didn’t like him, but I liked him. He said there were hairdressers who made a lot of money who may not be great hairdressers, but they had great personalities. Then there were great hairdressers who sometimes couldn’t keep their clientele because of their personalities. My dad’s a Type A personality, he’s a Brooklyn kid. My mom’s from the Midwest, she’s very laid back. I’m somewhere in between. It works because people will say they come not only to get their hair done, but also to socialize. That was one of my knacks, I could always talk to people, and people would always talk to me.

I did banking for ten years, working for Bank of America and Marine Midland down by West Point. I was a head teller. One day, my mother said, ‘You don’t seem happy with banking. Your first love seems to be hair. Why aren’t you doing that full-time?’ So I transitioned back into it, and opened my own business 14 years ago, when my daughter was 13 months old.

The salon was down the road about half a mile, on [Route] 213. I bought the house in 2010. When it opened, my ex-sister-in-law was my partner. She left nine months later when she left my brother. I had a friend work as a nail tech for about two years, back when I had a tanning bed and a nail station. That stuff was my ex-sister-in-law’s idea, but it’s not my thing. I like to concentrate on hair.

I think you should have a psychology degree to be a cosmetologist. It’s like being a bartender. You hear people’s stories, but they’re not drunk. Making people feel good about themselves is probably the best part. If they don’t like it, then you’re in trouble. Thankfully, that doesn’t happen very often. I guarantee my work. If you don’t like it, I’ll change it.

Usually if I don’t nail it, it’s a communication problem. I prefer my clients bring pictures when they come for a drastic change. What they’re thinking isn’t always the same thing that’s coming out of their mouth. If they can’t find a picture, then I’ll pull out my phone and we’ll figure it out.

I worked in Rockland for two days a week until mid-June. In an all-female business it can get tricky. Most of the women there were in their 40s. We all got along well, which is unusual. I know many hairdressers, either meeting them or working with them, and sometimes it gets catty because of hormones, mood swings, and attitudes.

I thought about opening in New Paltz, because there isn’t a place that does black hair. Most of my clientele is Caucasian, but I have Puerto Ricans and African-Americans. New Paltz would’ve been a good spot, but then I would have to be open for regular hours and hire somebody. I’d make more money, but I’d be more stressed and I don’t like being stressed. I like being laid back.

My mom worked as a job coach for Board of Cooperative Educational Services (BOCES) and she had me talk to kids in high school because I did the program. My daughter does horseback riding and cheerleading, so her schedule’s crazy. I’m the emergency contact for a lot of people’s kids because I can flex my hours better than they can.

I just got remarried last year. My husband is in the fire department. I met him because I had cut his hair for years, as well as his late wife’s and his kids’.

I don’t charge a lot because most of my clientele are working people like me. It’s not that kind of place. I’m not going to charge $200 for a coloring. I wouldn’t pay that, so I’m not going to charge that. You can get hit by the economy, but people are still going to need a haircut at some point. People are always going to be vain. What happens during a bad economy is they may not get their hair cut as frequently.

It’s not work at all. I didn’t realize that until I talked to my daughter about college. I told her she should be an engineer because a lot of her teachers have said she would be well-suited for that field. She said, ‘No, I want to work with horses. That’s what I love to do. And you of all people should get that.’ Once she said that I said, ‘Aw, she got me.’ What can you say to that? I did get her to transition from being a trainer to doing equine facility design, so even if that doesn’t work out it certainly opens opportunities for her.

It’s funny, I say this all the time, I’ll probably keep doing it until I can’t. There was a family-owned salon I worked at that had a lady who was 80, and she would come in a couple days a week. They got her one of those roller-sets and she would roll around doing hair. I always thought that would probably be me. I would plan on continuing as long as I possibly could.”

Visit the other profiles in the series:

In At Work: Mahtik Calhoun, Emergency Medical Technician, Caitlin Marinaccio spoke with EMT Mahtik Calhoun about a particularly gruesome situation that will stick with him forever.

In At Work: Isabella Chisena Curates an Enchanting Collection, Catherine Rubino spoke with shop owner Isabella Chisena about her family’s entrepreneurial background, as well as her journey from selling jewelry at flea markets to owning her own store. 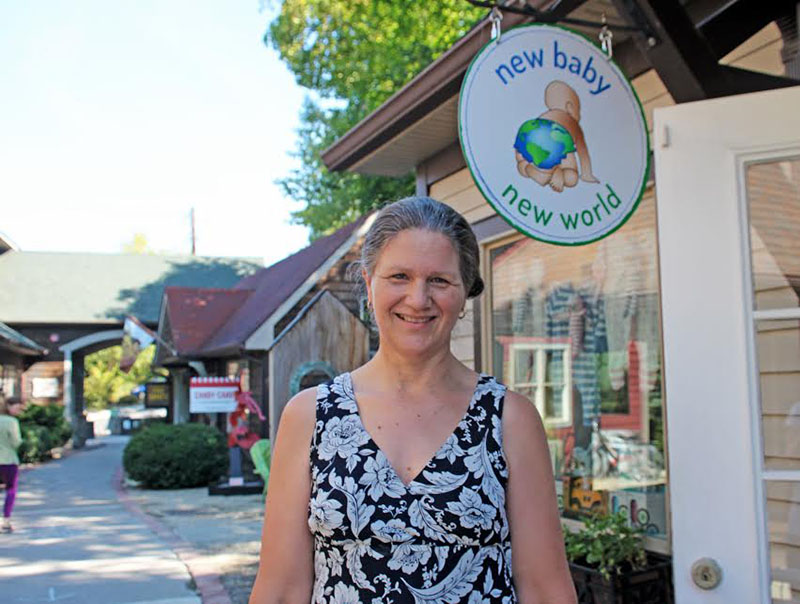