On a recent weekday morning, Gonzalez led children to a green door.  “Get in line, come on, get in line,” she said.

The teachers and assistants were moving the 12 children from the green music room to the red classroom.  The children, all about three years old, were eager to get to the red classroom for circle time and snack.  Once the students lined up, they followed Ms. Desiree, as they called her, out of the music room into their classroom, standing by their designated cubbies.  While the students waited for their names to be called for the bathroom, Gonzalez began setting up snack time.  Pulling out a handful of names, Gonzalez carefully placed six names around one table and six names around the other.  After placing napkins and 12 cups of water on the tables, Gonzalez took to circle time with the children.

While sitting on the floor, one of the students started squirming around and Gonzalez was asked to reprimand him.  “Come sit with me,” she said.  Placing the boy in front of her legs, she gently rubbed his hands as he comfortably lay on her chest.

Because Gonzalez, 21, loves working with children and wants to have her own classroom one day, she applied for a work study position at the SUNY New Paltz Children’s Center back in fall 2015.  A year and a half later, she has been working there ever since. She’s there nine hours a week, netting about $180 in take home pay every other week.

As a full-time student, it was hard for Gonzalez to find a job during the academic school year.  However, because she qualified for financial aid, she was eligible for the Federal Work Study program, known as FWS.

According to the article “Making Work Study Work,” about 700,00 students, or one in every 10 full time students, receive FWS each year.  With one billion dollars in grants, FWS covers 75 percent of student employee wages.  FWS is a federally funded employment program offered to students as part of their financial aid package.  Eligibility is solely dependent on FAFSA and the funds available during the time of the application.  When applying, students must show FAFSA that their family contribution is less than the cost of attending their college or university.

Gonzalez uses FWS for gas, food, going out with friends, and extracurricular activities.  She has $200 dollars in her savings account, which she created the account for her future children.

“Every two weeks 15 dollars automatically get deducted out of my paycheck and put into my savings account,” she said.  “I want to make sure my kids will have some tuition money when the time comes.”

“Hopefully my past experiences will find me a job.” – Desiree Gonzalez

Growing up in Queens, NY, Gonzalez lived in a comfortable three-bedroom apartment with her parents and older brother.  Her mother, Marie Gonzalez, worked in a hospital as an aid, and her father, Orlando Gonzalez, worked in sanitation.  When Gonzalez was eight years old, her father was hit by a truck and had to get a permanent metal screw in his knee.  With this, Orlando could no longer lift heavy objects, forcing him to take medical leave.

Danny died when he was 16 years old.

With funeral expenses, medical bills, and unaffordable rent, the Gonzalez family decided to take a break from Queens and move to Binghamton, NY, taking them about a year to buy a reasonably priced house.

With Orlando on leave for over 10 years now, and Marie sporadically babysitting, the two earn about $22,000 a year.

Gonzalez has financially helped her family ever since she was 16 years old.  Her first job was at Five Guys, and whatever she made there she would divvy up between herself and her parents.

Because of her financial situation, Gonzalez learned how to limit recreational spending at an early age.  “Now, whenever I want to buy something I think, do I need it? Or do I want it?” she said.  “Because most of the time I just want it.”

As required by New York State, students majoring in early childhood education must do student teaching before getting their own classroom. Gonzalez will be living with her grandfather in Williamsburg, Brooklyn while she student teaches in New York City.

“My grandfather lives in an apartment in the projects, so living there will be quite different than living in New Paltz,” she said.  “I’ve heard gun shots in the past, but I try not to focus on that.”

“Whenever I want to buy something I think, do I need it? Or do I want it? Because most of the time I just want it.” – Desiree Gonzalez

Gonzalez works at the Children’s Center three times a week, making $9.75 an hour.  According to her FWS plan, she should be making $750 each semester.  However, because Gonzalez will not be living on campus spring semester, she will only be making $1,100 for the year.

“I asked my boss if I could work more hours since I won’t be working at the Children’s Center next semester,” she said.  “But I am not allowed to work more than 15 hours a week because of work study regulations.”

Although Gonzalez does not know where she will be placed, she does know she will be working 8 a.m. to 5 p.m., five days a week.  Gonzalez will not be getting paid for student teaching and will no longer have work study to fall back on.

While living with her grandpa, Gonzalez will be saving money on food and rent, but will need to pay for transportation around the city.  “I’ll need to learn how to get around by bus and train, which will be interesting,” she said.

In addition to saving money for transportation, Gonzalez will also need to save money for graduate school, school books, teacher certification exams, recreational use, and most importantly, health insurance.

“I’ve been researching medical plans for a while now, and I found one that is $50 for basic coverage,” she said.

When asked how she would pay for these expenses, she chuckled.  “A job.”

Gonzalez hopes to babysit down in New York City because she can make her own hours and wage without conflicting with her student teaching.

“I’ve babysat in the past,” she said.  “So hopefully my past experiences will find me a job.”

Gonzalez enjoys working with children because she believes they are filled with pure joy.  “Everything they do is because they are genuinely curious,” she said.  “It makes everything they do a learning experience for both me and them.”

Gonzalez’s goal is to stay in the city after student teaching and find a job.

If the city does not work out, Gonzalez will move back to Binghamton with her parents and hopefully find a job there.  “It really just depends on what I can afford,” she said.  “I love the city, but it is very expensive.  So if I don’t find a job, I will need to reconsider my future plans.”

But until then, Gonzalez is focusing her time and energy on her classes, field work, being the president of the Student Mentorship Program on her campus, being the membership vice president of her fraternity, and the Children’s Center.

“I am blessed to be getting a college education and experiencing what I have thus far,” she said.

Although she pays for various expenses on her own, Gonzalez believes her parents help in more ways than they should.  “I wouldn’t be where I am without the help of my parents,” she said.  “I’m very grateful for them.”

Sitting at a round table in the Sojourner Truth Library café, Gonzalez peered into her iPhone screen.  While reviewing her financial aid information, she talked about being the first in her family to graduate college.  “It is a great accomplishment,” she said.  “I didn’t know if I was going to be able to go to college right out of high school.  But thanks to financial aid and FWS, I was able to achieve my goal.”

Gonzalez talked about student teaching and how excited she is to work in New York City.  “I know that wherever I am placed, I will learn and grow as a person and future teacher,” she said.

She has one financial obstacle to get over before she even starts: buying a watch.  She isn’t sure what brand, color, or size watch she wants—all she cares about is having one by the time she’s in the classroom.

“I am asking my parents to get me one for Christmas,” she said.  “I need to be able to tell time while I teach.”

Mon Dec 19 , 2016
By Bryce Eckwall Bill Meade lives alone in a camper on his mother’s property with his German Sheppard named Kaiser. The fifty-year-old cook makes his way to work about an hour south, five days a week serving up the likes of 34-ounce porterhouse steaks for two and roasted duck. […] 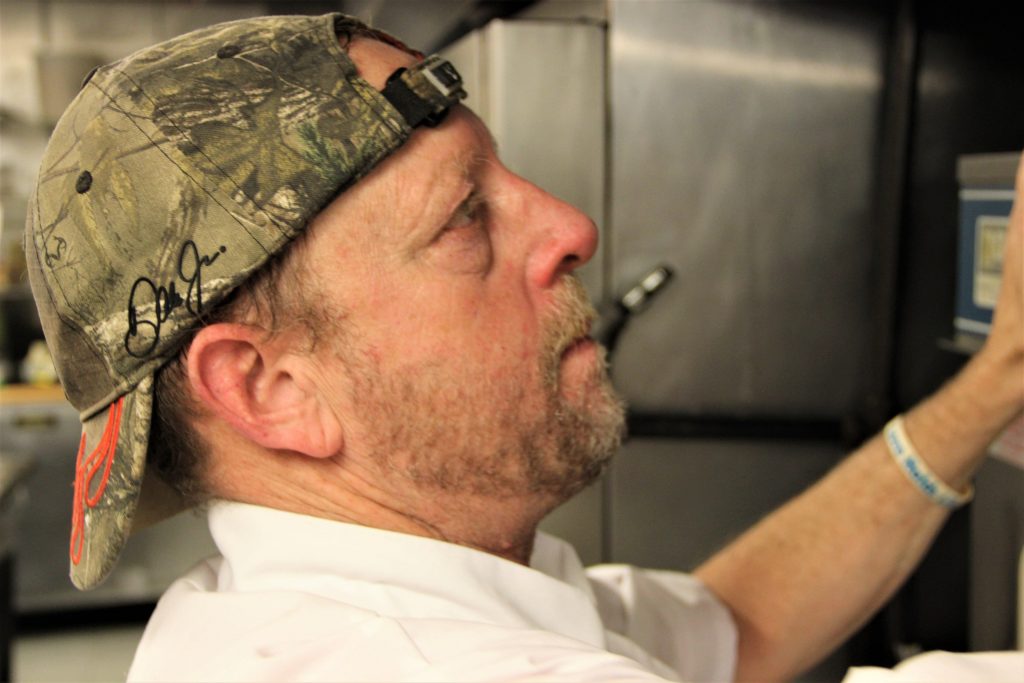