In the world of COVID-19, keeping an active social circle can be hard. Lucky for one group, they’ve discovered a fantasyland that they can travel to at any time they want.

The land in question is the one of “Dungeons & Dragons,” a fantasy roleplaying game created in 1974 by Tactical Studies Rules, Inc. that is now owned by Wizards of the Coast LLC. The game involves individuals who embody fictional characters in different interactive stories working together to solve problems and save the day. The experience can go deeper, for a small group from Orange County the game has been used as a tool to inspire them creatively, maintain relationships, and survive the isolation of our current world.

The “party”- the name given to groups playing the game- is Jack Dolan, Dylan Martin, Stephen Koopman, Alex Lanzano, Alec McCormick, and Matthew Penchenski. Friends since high school, they bonded over the fantasy genre enjoying “Lord of the Rings” movie marathons and playing the online game “World of Warcraft” for hours on end. For them, creating their own stories within the genre seemed like the next logical step.

The creative aspect of “Dungeons & Dragons” is one of its strongest. “Imagination. I’ve been able to create whole worlds inside my head and bring them to some sort of life for others to enjoy. There’s this massive rewarding feeling from creating a story, character, or item that makes my friends’ faces light up.” Koopman said. In the world of “Dungeons & Dragons” the dungeon master- the person who runs the game and keeps track of the characters- has the option to play through prewritten modules made for the game or use the tools given in various player’s guides to create his own worlds and stories. This has influenced their enjoyment. Unlike other media, where outside creators determine what the viewer experiences, in “Dungeons & Dragons” they get to create the story themselves.

“I think D&D is really magical in the sense of the memories you create with your friends at the table. Ask anyone about their favorite memories about D&D and something weird will happen. They will always say the word ‘we’ as if they are talking from the perspective of their characters, being in that imaginary world,” Penchenski said.

Dolan added. “Even after all these years we can all still surprise one another.”

The game also provides a social outlet. It is traditionally, though not exclusively, played in-person around a table with maps and miniature models in the center to visualize the actions being taken. Playing is a very interactive experience, with players collaborating both in and out of character to achieve their goals.

“D&D has helped me keep a very healthy relationship with some of my closest friends. I’m usually very introverted so if I don’t want to hang out one day during the week, I don’t have to feel bad because I know I’ll see a lot of my friends come Sunday,” Penchenski said. “Since starting D&D I can meet with my friends on a regular basis and I’ve noticed that I keep in better contact with them all,” Koopman said.

It can also lead to more comfort in social situations outside of the game itself, giving players skills they might not otherwise have. “I would have a whole lot less confidence, that’s for sure. Being immersed in a character with other people gives a mutual assurance that you’re doing the right thing. You have the opportunity to take chances in a place where the only risk is losing words on a page,” Dolan said.

Like most social groups right now, players have had to adapt to the new distancing norms. Fortunately, the game is tailor-made for these changes. Roll20 is a free online resource for groups looking to play “Dungeons & Dragons” virtually, providing all the tools needed to experience the game in quarantine together. The map can easily be imported onto the platform and players have access to thousands of character sheets, models, and stat pages to make the transition to virtual as seamless as possible.

Dungeons & Dragons can also be a form of passive entertainment. Different celebrities and personalities have begun podcasts and livestreams of them playing, letting players still enjoy the game while adapting to using sites like Roll20. These famous games sometimes even turn into opportunities for players themselves. Matt Mercer, of the popular Critical Role podcast, released one of his homemade modules, commonly known as “homebrew”, in an official book with Wizards of the Coast. This meant players could now follow down the same path as some of their favorite characters while also twisting the story to best fit their group and playing style.

This “homebrew” is another way certain players are spending their isolation. There are entire sites dedicated to dungeon masters creating their own worlds and stories to share with other like-minded individuals. Even if people don’t play the campaign for months the creator gets to spend their time creating their own world and history, lending to the overall creativity of being involved with the game.

The party has been involved in all three of these aspects of the game since quarantine, with some members being familiar with Roll20 and others using it for the first time. “It’s strange playing online for the first time but it’s nice to not feel like our story is on hold. It helps me have something to look forward to and not staring at my TV all day playing Animal Crossing,” Koopman said. “Instead I can stare at my computer and have a laugh with my friends.”

Jack Dolan has had major success with working with his own custom campaign in the same realm as Mercer’s. “It’s kinda nice to have some downtime to just focus on my world. With everything else going on in real life it’s really nice to have somewhere to escape to that isn’t just watching something on a screen,” said Dolan. Koopman agreed saying, “Before this year I can’t really remember any of us doing custom content. Now though I think almost every one of us is planning our own personal world to show everyone.”

“Dungeons & Dragons” can be a way to stay in touch with friends even after social restrictions are lifted, easy to jump into as a beginner. “Talk to your friends and pick up a digital starter set. Services like Roll20 and DnD Beyond help to make the game really easy to run and understand.” Dolan said. “My recommendation to any group who wants to try D&D is that you don’t need anything but character sheets, some dice, and imagination,” Penchenski agreed.

With social distancing, civil unrest, and a general feeling of bleakness hovering over the year of 2020 perhaps it’s time for people to take a break from the normal forms of relevant media. When the endless list of films and television presented on Netflix begins to feel like a chore it might be time for us to start telling our own stories, stories where the people we love get to succeed and grow, becoming heroes in their own right.

Wed Dec 16 , 2020
Edited and packaged by Austin Kong How can a nonprofit, educational and cultural charitable theater survive during the COVID-19 pandemic? Movie theaters are among many entertainment businesses that don’t have a clear pathway to recovery.  The Rosendale Theatre Collective is a nonprofit, independent company dedicated to preserving the historic Rosendale […] 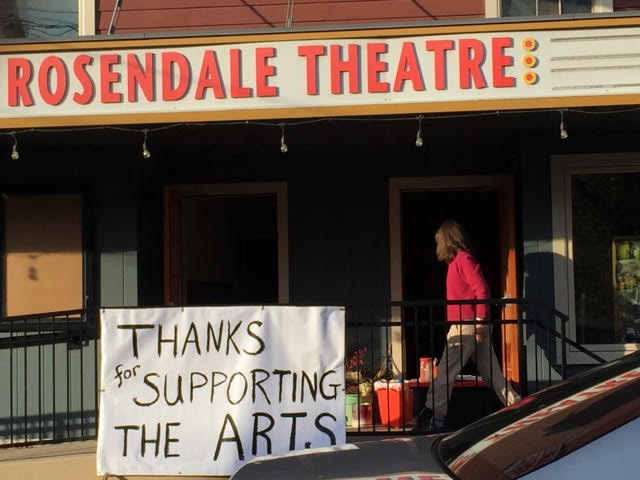