Americans use approximately 50 billion water bottles each year, resulting in severe environmental issues and costing the average American over $100 per year. As of fall 2014, SUNY New Paltz is well on its way to banning bottled water because of the H2Occupy movement, led by Austin Schatz, a 24-year-old alumnus. H2Occupy is a movement to remove plastic water bottles from campus, which is currently being negotiated by Campus Auxiliary Services (CAS) starting in the spring semester. Also, Schatz’s efforts have influenced the school to add 34 refilling stations for reusable bottles on campus. Aside from his own activism, Schatz has created a YouTube video of fellow students also speaking out against the use of disposable water bottles. With 66 percent of SUNY New Paltz’s garbage ending up in landfills, Schatz believes this is a necessary change.

Editor’s Note: As of Dec 2014, CAS Board unanimously passed the bottled water ban.

Anne: So, what’s the problem with bottled water?
Shatz: Bottled water contributes to a lot of issues, not only environmental. What a lot of people don’t realize is corporations are gaining control of our water sources. I was surprised SUNY New Paltz didn’t already have this in place. I think finding a sustainable solution to water is so much better than supporting Pepsi.

How did the H2Occupy movement come to be?
I took a class called Theories of Persuasion, and as an assignment, I wanted to talk about the school banning water bottle sales. After presenting it to my class, I chose to actually try and get it done on campus.

What was your plan of action?
Well, I got put in touch with the Hydration Committee, which is a student club that was given money from campus to do something sustainable. It had been two years and they hadn’t decided where to spend it yet, so I came in to get them on board and we worked together on the project from then on. My goal was to get all of the water fountains on campus retrofitted, so they were cleaner and able to fill reusable bottles, and then hopefully end up eliminating plastic bottles all together.

What was the H2Occupy event like?
After making a YouTube video with my classmates reading facts about water bottles, we set up a petition signing in the MPR [Multi-Purpose Room]. We gave out water bottles and asked students to sign. It was great, we had over a thousand signatures and people were genuinely interested in helping.

How did you come to discussing this with CAS?
I got set up with their new Sustainability Coordinator, Lisa Mitten, and she helped us to present to CAS. We explained our petition and showed our video. They were immediately supportive and thankful for our work. Within the next two years, each water fountain on campus has been fixed, with the Hydration Committee’s money as a contribution. CAS is starting to talk about plastic bottles.

What is your hope for the future of SUNY New Paltz in regards to your work?
Ultimate goal is for water bottles to be banned. Also, for people to have a genuine sense that less is enough. It’s a shame people feel entitled to things even when they have such a negative effect on the planet.

Thu Feb 12 , 2015
On Thursday, Jan. 29 a sprinkler line burst in Coykendall Science Building, causing water to rush down from the ceiling in the foyer at the west entrance of the building and out the doors. There was “minimal damage that was done to the sheetrock in the foyer space. Also, no […] 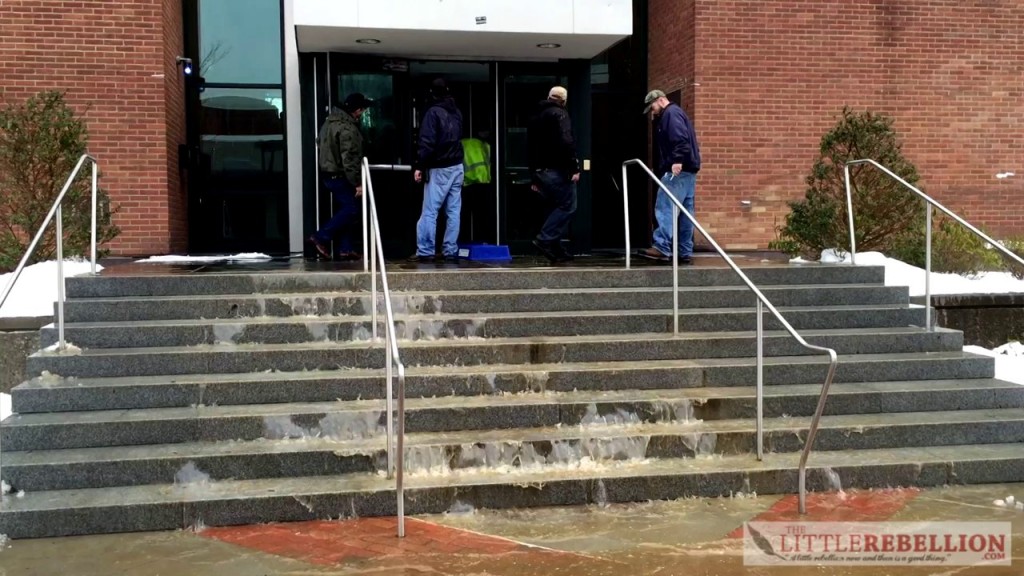