Tim Davis, a renowned photographer and poet, met with students, friends and faculty at SUNY New Paltz on Thursday, April 28 for an art lecture to talk about his work.

Davis’s photography has been featured all over the world and he has won numerous awards, including the Leopold Godowsky Jr. Color Photography Award. The lecture, sponsored by the Student Art Alliance, gave the audience a chance to familiarize themselves with his work. A slideshow described the inspiration and stories behind his numerous photo collections.

“I kind of use the camera in an experimental way,” said Davis. “I try to follow the motto, have ideas and make images that are versions of those ideas.’”

Many of Davis’s collections feature photos of everyday situations or objects which provide a range of humor and honesty to them. One series, “My Life In Politics,” consists of pictures ranging from presidential campaign posters to a mural of Martin Luther King, Jr. in a restaurant with the banner, “One People, One Nation, One Taco, One Destiny” above it.

Davis has also become well-known for a series of pictures, titled “My Audience.” The collection features pictures that Davis takes of his audience, sitting with somber, blank stares, before every event he speaks at. The photos are humorous and personal, and before he even starts talking the audience has become part of his collection.

“He does things that are brave and embarrassing and funny and tragic,” said Ken Landauer, a local resident who attended the event. “I think he boldly goes where everyone else doesn’t want to go. He’s kinda fearless.”

Davis’s dedication to his photography is also apparent in his dedication to his camera. The 4×5, large format camera was used for his very first photograph collection and has followed him to every corner of the earth. He admits that he bought a digital camera once but says he only uses it for “comedic photography.” The 4×5, about the size of a floor lamp, is the only camera that Davis trusts.

“I can talk about it all day long, it’s slow and it forces you to think about everything that you’re doing,” said Davis. “It makes you uncompromising. Rather than digital where someone says, ‘I’ll take 5,000 pictures and see if I like any of them,’ this camera has a level of resolution and description that I can’t give up.”

During the last two years, Davis has been working on his newest collection, titled “The Upstate New York Olympics.” The collection contains a series of videos, sculptures and photographs that take a detailed look at upstate New York.

The Samuel Dorsky Museum of Art will be featuring the “Upstate New York Olympics” collection through July 17 and is open every Wednesday to Sunday from 11 a.m. to 5 p.m.

Sound Off: Humans Vs. Zombies 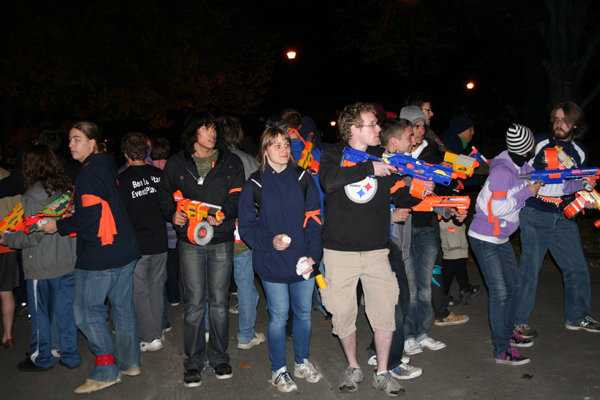