Tucked away in the woods of Huguenot Street there is a place where art is accepted in all forms and expressed by all of its visitors. The eight-year-old Unframed Artists Gallery provides a haven for art and all of its enthusiasts. For the first time, live music, dance and other performance arts accompanied the gallery’s art pieces on April 12 from 5 to 9:00 p.m.

The event allowed guests to visit the gallery as they observed local artists’ works while exploring the gallery’s grounds. Outside, some visitors partook in live painting on a piece of cardboard pinned to a tree, while others expressed themselves physically by hula hooping and participating in acro yoga, a practice that intertwines yoga, acrobatics and healing arts. Artists and visitors alike entered a large barn where guests could warm their bodies by the fireplace and their souls by the music stage. In addition, the barn’s decked-out, psychedelic decor stimulated visitors’ minds as their stomachs were satisfied by a potluck-style dinner.

The gallery was started by artist Michelle Riddell and her husband, Bryan, because Riddell wanted to create an inclusive environment where artists are not shut out, as she deems the art scene as often creating over-requirements for its artists.

“That’s why hidden artists are coming out of the woodworks throughout the Hudson Valley, and showing their pieces in our gallery,” Riddell said.

A major factor that inspired Riddell to keep the gallery going was when she met a friend and fellow artist, Amal Maseer, during her time protesting the war, in Iraq. Maseer would send Riddell her artwork through the mail to sell in the gallery, and Riddell would mail her back the profits from her sold work. The money went towards providing food for Maseer’s three children. People of the Hudson Valley heard of Maseer’s wish to visit the United States through her “Art Bridge to Baghdad” project, and today she owns Amal’s Authentic Middle Eastern cuisine on Chestnut Street.

It is evident that unified collaboration is the driving factor of the gallery’s success, as the event’s communal setting was a reflection of its coordinators’ grass-roots, open collaboration, said one of the events’ organizers Josh Otero.

“We wanted to create a communal environment where all of the arts can be explored and discussed through an open forum,” Otero said.

Otero got word of the gallery last semester, attending his first meeting, as he was interested in incorporating music and other elements of art into an event. Although it was his first meeting, the fourth-year New Paltz English major said when he suggested his idea of this art fusion Riddell not only welcomed it, but she allowed Otero to curate the April 12 show — the first show of the year.

“I was inspired by all of my history theory classes where there’s all of these schools of artists and thinkers, getting together and sharing creative ideas,” Otero said. “It’s through collaboration that artists can push themselves forward, and I wanted to create that vibe at this event.”

Otero worked with artist Vivien Stokes in curating pieces that were submitted by local artists. The submission guidelines were simple: every piece must adhere to the gallery’s theme, Art Speaks: Word and Image. Artists accompanied their pieces with some form of words, whether it was a poem or song lyric. In addition, the artists had to hand in a bio, while their paintings had to be ready-to-hang.

Though there was no admission fee for its guests, the gallery did require each artist to pay a fee of $20 for students and $25 for adults. 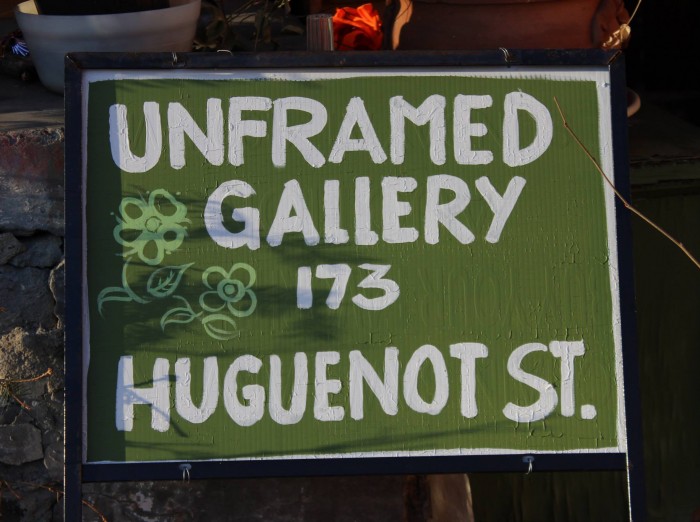 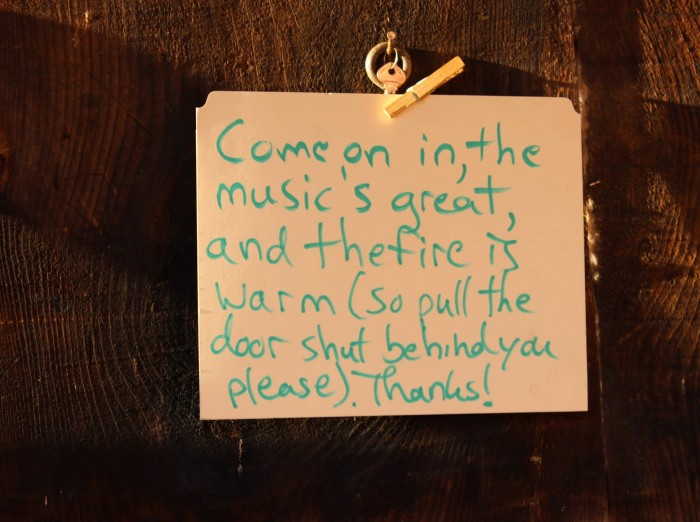 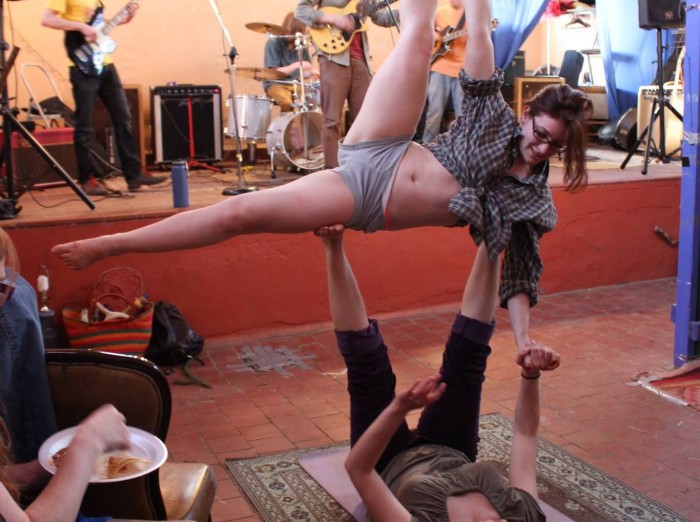 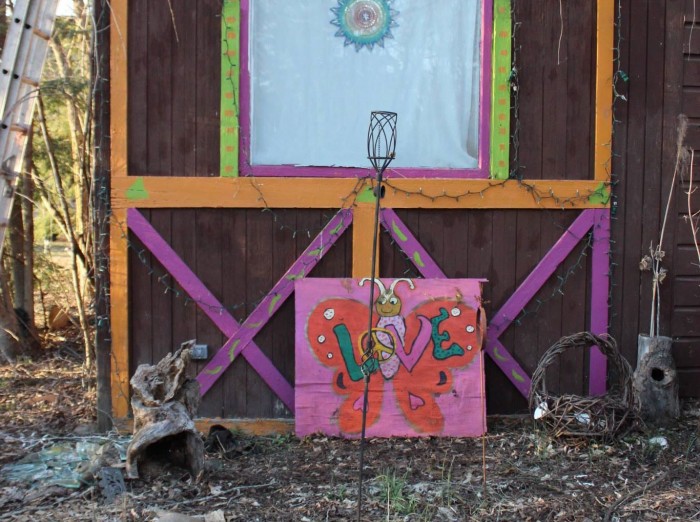 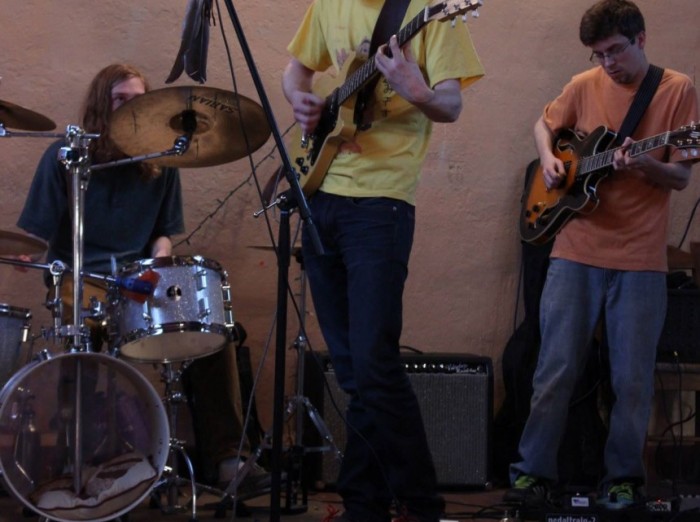 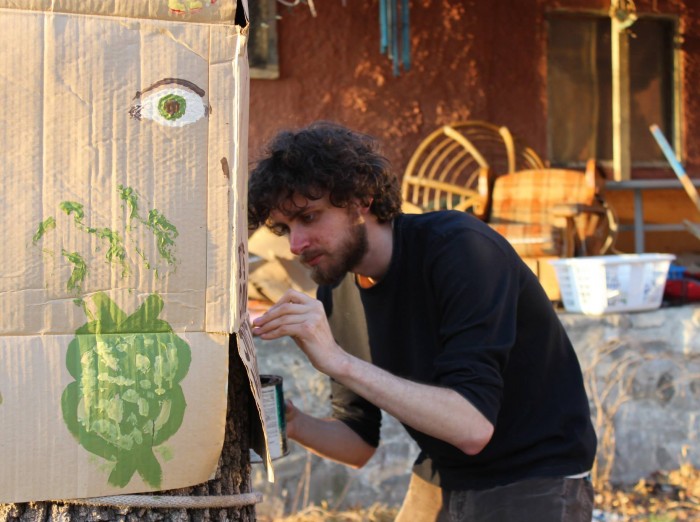 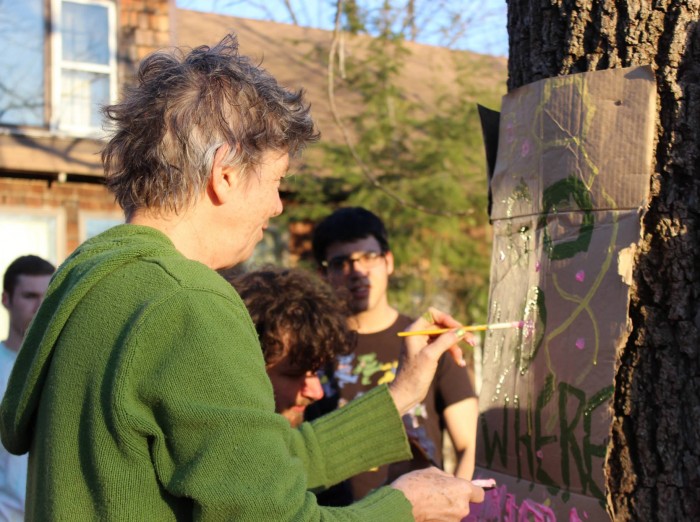 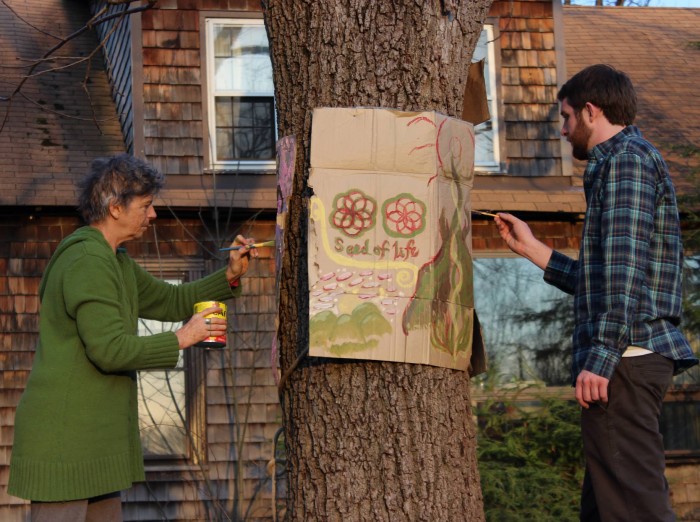 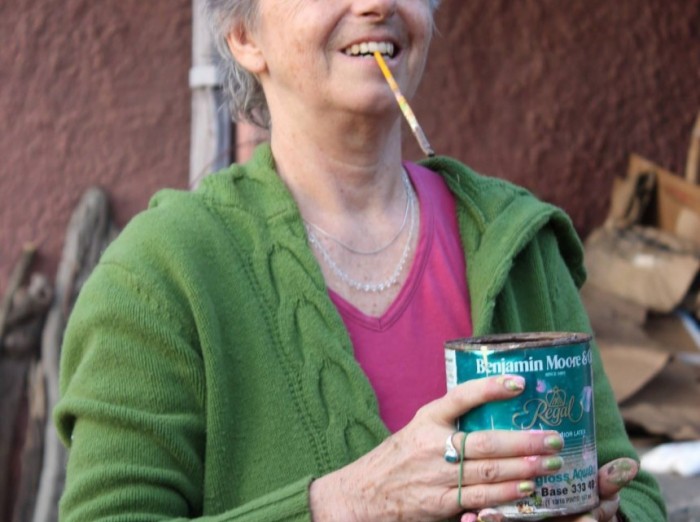 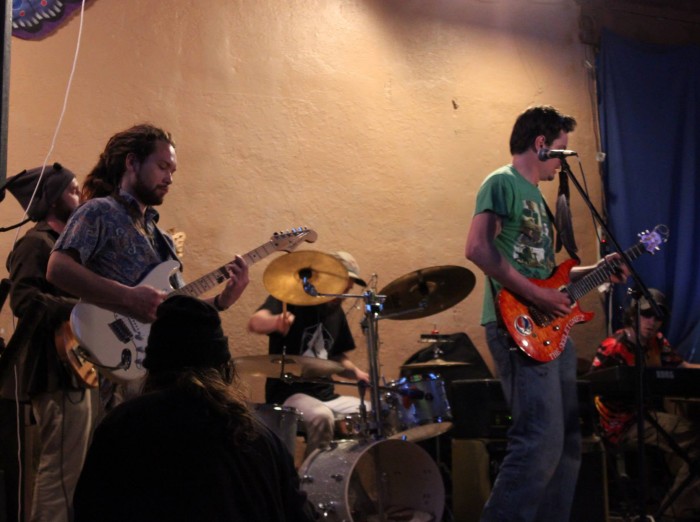 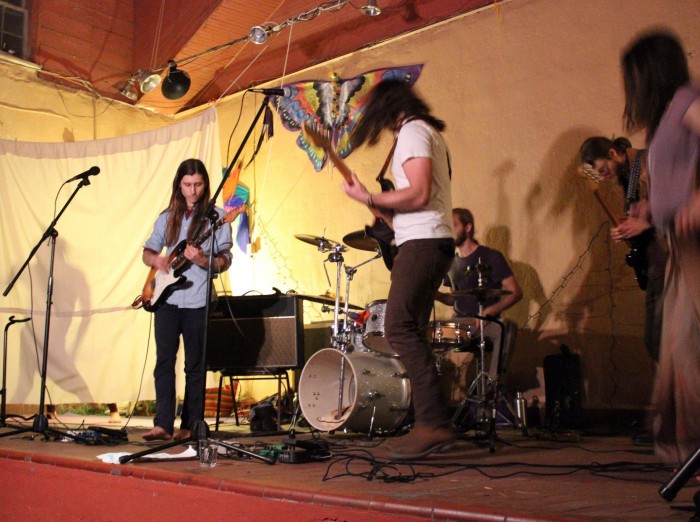 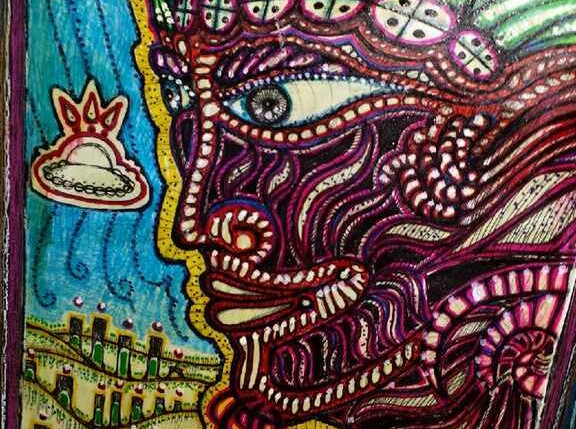 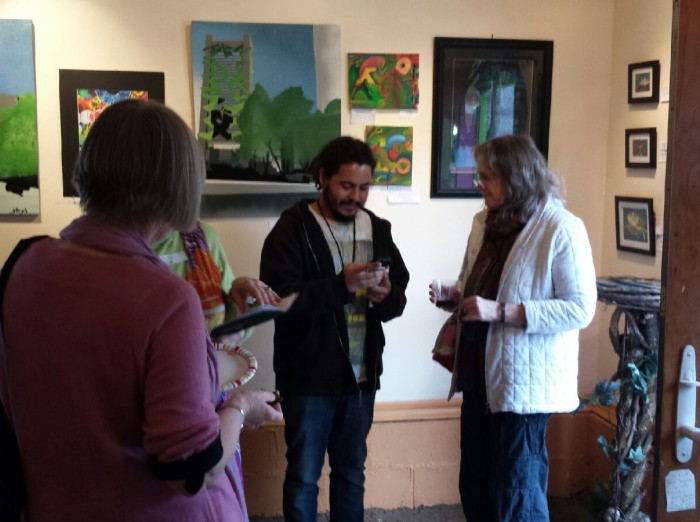 While Otero handled the event’s creative side, his business major friend, John Morrison dealt with the logistics associated with gathering four of his favorite New Paltz bands to play at the barn show.

“Josh is like the spirit and I am the pen and pad, obsessively organized by nature,” Morrison said.

Morrison, who said he always wanted to get involved with an art gallery, helped Otero in organizing, attending two meetings with Otero, Riddell and other contributors for the two weeks leading up to the show. In grassroots fashion, the team distributed flyers and postcards with images of the gallery’s pieces, in hopes to attract an open-minded crowd of young people. The crowd they ultimately attracted, “fit the bill and then some,” according to Morrison.

“When I saw the easy-going, kind people who were working at the gallery, and noticed that the space was filled with bunny rabbits and flowers, I knew that this would be an interesting atmosphere for the bands I picked,” Morrison said.

The headlining band, The Breath Collective, took the stage for an hour and a half, performing all original material. The group combines a smorgasbord of genres, set out to get the crowd moving. Its members were accompanied by an interpretative dancer, set behind a white curtain, as she employed tree branches and deer horns as her props.

“The April 12 show was our first gig back, after taking a recording/writing hiatus and it was as good as we could have asked for,” Tyler Mason, the band’s lead singer and guitarist, said. “We love playing venues where music is the focus rather than hanging out at the bar, so my experience was extremely energized and fluid.”

Reggae-influenced, acid-jazz band En Knee Given Daze also took to the stage to sing some protest songs and songs about “racism, good and bad times, and opening hearts to love,” according to lead singer and guitarist, Gerry Immich.

According to Morrison, who plays guitar for Seymour, one of the featured bands, the most essential component to the event’s unique atmosphere was that the entire event surrounded the music and artwork, without focusing on making a profit.

“There was no ulterior motive, it was just about the musicians and artists getting together in a cool space to share ideas,” Morrison said. “We were going to give all of the evening’s donations to The Breathe Collective, for bringing out most of the crowd, but they said we could keep it for the next event.”

As for the next event, which will be held on May 2, at 5:00 p.m.,  Morrison said that the donation money will be used to get nicer paints for outdoor murals. Otero remains hopeful that the next show will be even greater, due to the success of  the April 12 event.

“The gallery’s theme will be Luminous Hudson Valley and will feature the nature that encompasses us,” Otero said. “We’re planning on having a drum circle, and graphic art displayed on a projector.”

“This is going to be the real banger, so get ready,” said Morrison.

To get involved with the Unframed Artists Gallery, you can check out a list of the gallery’s events and workshops here and contact Riddell: unframedartists@gmail.com

Riddell said students have been a part of the gallery, since its beginning and they can stay involved by attending workshops. running their own workshops or curating their own. Riddell’s advice to artists: “Keep your center and soul, and take only advice that resonates with you from the outside world- only listen to those who challenge you to do your finest, don’t listen to those who may tarnish your spirit and esteem.”

You can catch The Breath Collective at their next gigs on May 3 at The Beltane Festival, May 6 at Snugs and May 17 at Bacchus.

To check out the next En Knee Given Daze show, click here.

Thu Apr 24 , 2014
Look for work in a field you’re passionate about, work harder than you’ve ever worked, and believe in the power of your own personal brand. Those were some of the career tips given by media executive Barry Katz, whose keynote speech kicked off Media and Journalism Week, which runs until […]