“What’s with all the pinwheels?” was the question on everyone’s mind as they passed Old Main Quad on Thursday, April 14.

One of SDT’s main philanthropies is PCAA. The Gamma Nu Chapter, along with other SDT chapters across the country, sold pinwheels for $1 and encouraged everyone to plant them in the ground to create a pinwheel garden of awareness.

“This is our first year planting a pinwheel garden and we’ve had so much success,” said Carlyn Justis, a fourth year communication disorders major and member of SDT. “We want to make it an annual event.”

By noon, there were already 400 pinwheels in the ground. The total amount raised was about $700.

“We usually meet our goals on our philanthropy projects, but this time we have doubled it,” said Heather Barr, a third year secondary education major and member of SDT.

The number and rate of child fatalities in the United States resulting from abuse has increased since 2005.

According to the United States Department of Health and Human Services Administration for Children and Families Children’s Bureau Report, in 2009, about 1,770 children died from abuse and neglect in the United States. This was an increase from 1,720 in 2008 and 1,330 in 2000. These deaths were 80.8 percent children under four years of age, as compared with 45.3 percent in 2008.

There are different types of child abuse including neglect, physical abuse, sexual abuse and psychological abuse.

According to the United States Department of Health and Human Services Administration for Children and Families Children’s Bureau Report, 75 percent of substantiated child abuse cases were of neglect in 2009. The second leading type of abuse was physical, at 15 percent. State child welfare records indicate that substance abuse is one of the top two problems exhibited by families in 81 percent of the reported cases.

According to PCAA, at least three children die as a result of abuse and neglect every day.

The New York Office of Child and Family Safety encourages people to realize child abuse is not an isolated issue and that it affects not only children and families, but can lead to substance abuse, domestic violence, animal abuse and prevent people from being functioning members of society.

“Raising a happy, healthy child is not a one-person effort – we must work to build stronger community ties and neighborhoods where parents and families feel connected,” said OCFS Commissioner Gladys Carrion.

Throughout the day, people donated $1, $2 and sometimes more to PCAA via SDT. It was a glimpse into what was happening throughout the country in April.

“We are happy that we can contribute to this cause and it makes us happy to know our sisters are advocating for the same cause across the country” said Sonia Noriega, a third year double major in contemporary music studies and music history and literature.

With a gust of wind, the pinwheel garden on Old Main Quad was spinning with the letters PCAA spelled out in front. According to PCAA, nearly 900,000 pinwheels have been displayed since April 2008.

Caregivers looking for help or information about child abuse, parenting or family issues are encouraged to call PCANY’s Parent Helpline at 1-800-CHILDREN (244-5373).

Thu Apr 28 , 2011
Communication and Media week began on Monday, April 25 with an Alumni Panel in the College Terrace.  The speakers on the panel included Bryan Neilon, Janus Adams and Dan Barry.  Other events that took place were a screening of “Changing Identites: A story of Traumatic Injury and Art,” a documentary by Professor […] 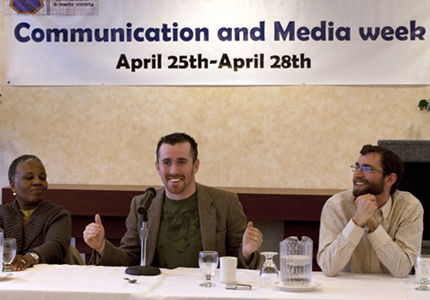