Living with HIV/AIDS can be exhausting. This is not only a physical challenge, but also a mental one, as people with HIV must deal with their own fears as well as myths and misconceptions about this disease by the general public. These were just some of the realities shared by HIV/AIDS survivor Gary Levinson, a SUNY New Paltz alumnus who spoke on campus on Oct. 1.

Levinson, an Ulster County resident and graduate of Dutchess Community College and New Paltz (class of ’89), grew up believing he could only get HIV through drugs or if he were gay. People widely believed the LGBTQ community was a tightly knit group of people, where the disease would primarily spread. He also believed he had less of a chance getting HIV in college.
His confidence in his health, and lack of worry about getting HIV was broken, by the question people are afraid to ask HIV patients:

“How did you get it?” sophomore accounting major Steven Moon said.

Little did Levinson expect, he had the virus since his freshmen year in college, when he had sex. Levinson had contracted the AIDS virus at the age of 19, but he was living undiagnosed for seven years. When the virus converts from negative to positive, it goes unnoticed, Levinson said. The change is noticed through fever-like symptoms, but Levinson only assumed his fever-like symptoms were from over exhaustion caused by his long work days. One day, he got a fever and felt heavy. He went to the doctor assuming the cause was nothing more than pneumonia. But he was wrong.

After two weeks, he began to feel very ill, having lost 25 pounds and waking up in sweats two to three times a night. He wasn’t responding to the treatment doctors gave him; he was only getting worse. Having a 105-degree fever at one point, he found his chest feeling tight and he found himself struggling for air. He rushed himself to the hospital where he was immediately taken in.

Tests through x-rays, blood samples and IVs revealed it wasn’t just pneumonia, but rather that his lungs were beginning to collapse. The doctors said he was lucky, telling him if he hadn’t shown up when he did he would have died. After numerous tests, the doctor arrived back into the room where he found Levinson and his father waiting quietly for the results.

The doctor closed the door behind him slowly and gave Levinson a grim look. The three words would change Levinson’s life forever.

At this point, the meeting room full of students listening intently to Levinson was dead quiet.

Levinson immediately started crying hysterically, as he was raised to believe he was a dead man if he got AIDS. His father rushed over to his side crying and hugging him. Levinson during this part of the speech took a deep breath and thought of his father.

“We’ll get through this, son,” Levinson’s father said.

After all the damage HIV had caused Levinson over his seven years of being undiagnosed, the doctor gave him 12 to 18 months to live. With this, Levinson proceeded to max his credit cards on luxuries for himself and his family with the idea he would die within the year.

Levinson ended up living past his expected life span. It took him five years to pay off those credit cards.

Life past that day was not easy for Levinson, as he could not pick up his life where he had left off. He returned to his work place without sharing his secret with his coworkers, claiming he had pneumonia the entire time he was away from work. One day, one of his coworkers had been watching a discussion about AIDS on television when he said that he hoped no cure was found, because AIDS was getting rid of all the undesirables. This sparked a rise out of Levinson who hadn’t revealed his HIV positive status yet. He was furious with his coworker and he wanted to out himself to tell off the coworker and show him he was wrong.

If Levinson had revealed his HIV status right then and there, everyone would have looked at him and treated him differently, he said.

He feared that it would also give his boss an excuse to fire him, even though his doctor said it was illegal to segregate workers based on a disease diagnosis. In the current world, people find ways to get around measures to protect employees and subject people to inequality.

“It’s a disease,” Levinson said. “It’s not something to objectify someone; it is the same as any other disease.”

The virus also damaged his overall health. He frequently experienced kidney stones, nausea, diarrhea and hair loss. At the meeting, Levinson pulled out 16 different capsules containing his medications – he takes 48 pills a day at the worst. This amount is one month’s worth, costing his insurance company $32,000 a year in Medicare. Levinson claimed it would be potentially fatal to miss a single dose.

“Do you ever get tired of taking all of those medications?” first-year accounting major Ana Perez said.
“Without them, I would definitely be dead,” Levinson said.

These pills weren’t an entire salvation however, as the side effects were more than a load to deal with for Levinson. Some of the medications caused nerve damage and numbed certain areas of his legs and feet, and cause his arms to itch uncontrollably.
“I couldn’t touch my feet together at night otherwise it felt like I was shattering them like glass, causing me to scream out in the middle of the night,” Levinson said.

Levinson’s stomach protruded outwards even though the rest of his body was skinny; another side effect. The stomach area was an accumulation of foods he had eaten, regardless of how healthy or unhealthy, that turned into fat and created layers on his stomach.

Levinson’s health regimen includes three to four days a week in the gym, strictly eating healthy foods, and constantly checking how his food was made. Levinson also said his medications can lead to a diagnosis of diabetes, and already has for 70 percent of people with HIV.

Levinson has joined the AIDS related community service (ARCS), in hopes of sharing his experiences with students everywhere so they will not take the same path he did. Many people who joined the group along with him were HIV patients. Among the group he entered with, he is the only one alive today, burying friends along the way.

He is now 48 years old and his only companion is HIV, which he has had for the past 22 years.

“November 14th 1992: I will never forget that day for the rest of my life,” Levinson said.

Being Digital: A Humorous Take on Smartphone Decisions

Thu Oct 9 , 2014
After reading Neil Postman’s “Technopoly,” students in Howard Good’s Being Digital class were inspired to create videos which tied in the author’s theories of modern technology advertisements and the issues surrounding them. Kevin Ha, gives a humorous take on how people are now judged based on what smartphone they have. […] 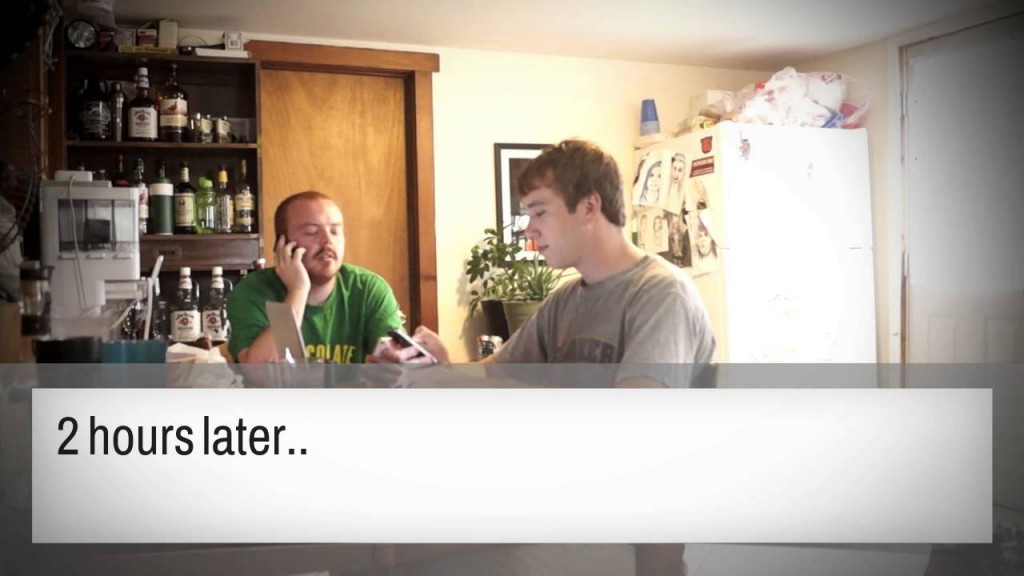