Visiting family in New Orleans, filmmaker Casey Grayson found himself suddenly inspired at the sight of the city’s oldest and most misunderstood cultural practices.

“I was just walking through the French quarter, and I saw this Voodoo ceremony taking place,” Grayson said. “I thought ‘this looks interesting, God bless,’ and I became very fascinated.”

Grayson and co-director Thomas Cznarty employed the guidance of Ava Kay Jones, one of New Orleans most prominent Voodoo and Yoruba Priestesses, in their documentary film “Uneasy Sisters: Voodoo and Christianity in New Orleans.”

The film debuted at SUNY New Paltz campus on April 24, attracting nearly a hundred students and faculty. The screening was followed by a presentation with Jones and a Q&A session with the priestess and the filmmakers.

The purpose of the documentary was to delineate the African-rooted religious and cultural influence from New Orleans prominent Roman Catholic background. Furthermore, it aims to separate fact from fiction in the popular perception of Voodoo and other African-rooted cultural and religious practices.

“I’m a New Orleanian who is Catholic, but I have roots in Voodoo.”

Perhaps the perfect amalgamation of New Orleans religious influence is embodied in the spirit of Jones. Dressed all in white, with a deep smile and a thoughtful reassuring glance behind thin-framed glasses, she exuded a disarming energy that opened ears and tore a soft hole through the fabric of assumption. Glowing, she could be seen on campus the day following her lecture, during lunch hour, blessing and striking up conversation with students and faculty.

Her fulsome nature was the inspiration for the character Mama Odie in the Disney-animated film “The Princess and the Frog.”

Raised and educated as a Roman Catholic in New Orleans, she also embraced the inherently spiritual nature of her Afro-Caribbean and Haitian ancestry.

“There is this whole other dimension of my childhood. My mother was a devout Christian and Catholic,” Jones said. “My mother was also the one who made me aware of spirits, of the spirit world.”

Jones studied under Catholic institutions from grammar school to college, where her studies and interests as an undergraduate prompted her to seek spirituality beyond the confines of her religion.

“It was a progression,” she said. “I’ve always been a deeply spiritual child, more than religious, and through all of my spiritual quests as a very young women I studied everything I got my hands on.”

After graduating college, Jones went through initiation into the Voodoo and Yoruba priesthoods.

Although Voodoo and Yoruba were brought to the West by different tribes, they share a similar cosmology and worldview with many similar practices, according to Jones.

Despite learning the atrocities of the early church and the history of religious oppression, Jones recalls, “The Lord really spoke to me and said, ‘Ava, don’t throw out the baby with the bathwater,’ and what that meant was that God, the Lord, did not want me to equate all the atrocities of religion with Him.”

“Here I speak for the African ancestors in telling that Voodoo was and is a religion, but at the same time I believe very strongly in the Hebrew scriptures, the Old Testament and prophecy, and the coming of Christ,” she said.

Jones is no anomaly in her combination of spiritual practices. African-descended people in the diaspora have a history of intertwining and blending the cultural heritage and spirituality with their worship of European dominant religious figures.

Her religious influences exist in a harmonious duality, characterized by an African cosmology.

“I have been able to feel that I’m not betraying either,” she said. “I’ve told the truth about my ancestors, but at the same time I have remained true to what I know Christ is really all about.”

Jones was raised between the 6th and 9th wards of New Orleans, where she resided until Hurricane Katrina devastated the area almost nine years ago.

“I’d always pray for protection for the city, but this is the first time I ever let the threat of a hurricane push me out,” she said.

Jones left New Orleans for a 17-hour trip to Houston, Texas on Aug. 28, 2005–one deceptively beautiful day before Hurricane Katrina ravaged the city and the levees broke.

For filmmakers Grayson and Cznarty, Jones’ involvement with the documentary was a “god-send.”

“Ava was so important. If Ava hadn’t been in this we wouldn’t have had a documentary,” Grayson said.

According to Cznarty, they came upon Jones accidentally during filming in New Orleans.

“I have categorically turned down a lot of reality shows and stuff, but I just had a good feeling about it when I talked to Casey,” said Jones. “[He] had such a warm inviting spirit.”

One of the primary obstacles in the filmmaking process, Grayson recalls, was building a rapport with the African religious communities. It is an exclusive community and family; you have to build up trust and you have to have an in.

“I wanted to show Ava that I wasn’t just going to run away with the footage and end up with something that was derogatory or false. I really wanted her to feel confident that Tom and I would make a film that was accurate and that was good,” Grayson said.

The documentary film, running 37 minutes and 56 seconds in length, took the filmmakers about two and a half years to make over three separate trips to New Orleans.

The documentary was shot in a combination of expository and performative modes, according to Nichols’ six modes of documentary filmmaking.

Grayson both narrates his journey through the film, and is often framed in the interviews and scenic shots, characterizing his personal growth and developing interest in his cultural heritage as they explore landmarks pertinent to New Orleans African-rooted Voodoo and Yoruba history.

“We did this by going to the places in the film with Ava, and what she said we recorded,” Cznarty said.

Cznarty recalls what happened when they went to the St. Louis Cemetery No. 1 to visit the tomb of the most revered Voodoo Priestess in New Orleans during the 1800s, Marie Laveau:

“There was actually a tour going on at the time of about 50 people, this being a very famous place to go. The second Ava walked into that cemetery and we went in front of Marie Laveau’s tomb, the tour guide backed away knowing exactly who she was, and Ava just started talking. And that’s what we got.”

Casting About The Bayou and Dispelling the Myth

The purpose of shooting in this improvisational mode was authenticity, something that the filmmakers felt the media and Hollywood lacks in its historically exploitative portrayal of Voodoo and African spirituality.

“Voodoo is the religion by various names that people of African descent brought to the new world when they were taken as slaves from Africa,” said Jones.

According to Jones, the word Voodoo means: spirit, deity and God, the creator of the universe.

But some of these common misinterpretations and cultural appropriations have a more deep-rooted historical explanation.

As African religious practices were oppressed and discouraged on American plantations, language associated with African religion took on pejorative connotations in the American psyche, according to research conducted by African scholar Margaret Wade-Lewis and published in the Black Scholar in 1993.

“Since African religion served as unifying force and made the possibility of revolt more likely, it was actively discouraged in the United States,” Wade-Lewis said.

Through media perpetuation of xenophobic superstition and the tendency of dominant Euro-American culture to appropriate and obscure the origin of African cultural practices and language, the word voodoo has come to exist in a duality wherein it captures the imagination and fascination of American audiences, serving as a malleable form of explanation and plot device in popular entertainment selling supernatural soap scripts to generations of television psychosis consumer drones, meanwhile maintaining a dissenting disposition in its alignment with a force dark and daunting.

“Hollywood doesn’t care,” Jones said. “It just lumps everything together, and that sells.”

Season three of the popular television series American Horror Story: Coven is an example of modern media that takes a good deal of creative liberty in its portrayal of New Orleans Voodoo and the legacy Voodoo Priestess Marie Laveau.

“A caricature of [Marie Laveau], which is not very realistic, is used on American Horror Story,” Cznarty said. “They are taking a lot of creative license with who Marie Laveau was.”

Far from the depiction of Marie Laveau as a faustian compromising witch-hunter coveted supreme in the popular television series, New Orleans as portrayed in the documentary is rich with her legacy.

“Marie Laveau was a Catholic who went to mass every day of her life,” Jones said. “And that to me speaks volumes of that powerful woman.”

Jones’ concern with the overarching misrepresentation of Voodoo and Yoruba in the media comes with a mass of lost seekers, whom she attests solicit her services for the doing of evil.

“There are a lot of things out there that are going under the name Voodoo that is not Voodoo at all,” she said. “People do need to understand the difference between what people who are spiritual do and what people who do evil do.”

For those seeking more than what organized religion has to offer, Jones offers this advice:

“Stay grounded in the light.”

Jones recalls, “my elders told me when I was being initiated, you have a lot of spiritual power, but you must always work in the light.” She laughed. “They didn’t have to say that too much to me, because I’m scared to hell of working the dark.”

The filmmakers hope their documentary film, “Uneasy Sisters: Voodoo and Christianity in New Orleans” sheds light on many of the harmful misconceptions surrounding Voodoo, Yoruba and African religion and cultural practices, and gains wider attention reaching a television audience in time.

Tue May 6 , 2014
When Danielle Weisbord, a sophomore at SUNY New Paltz, found out the college was only allowing students one day off this year for Passover, she was upset she wouldn’t be able to go home to celebrate. However, when she found out that near campus a Passover Seder would be held, she was glad […] 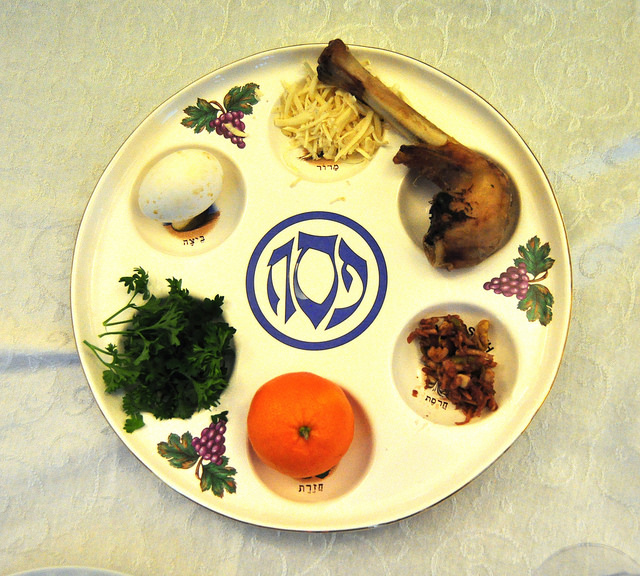