Gaining popularity at a rapid pace, yoga studios in New Paltz are doing more than just getting by, they are thriving.

The many choices of yoga styles being offered–from steady-paced Vinyasa classes, to slower Restorative classes–helps explain why so many studios are sustained locally, sources said.

“A good percentage of the population here are very athletic,” said Anna McConnell, personal trainer and owner of Sage Fitness, located on Sunset Ridge Drive, off Route 32 North. “They’re always looking to stay in shape and yoga is very appealing,” she added.

Entering her fourth year in business, McConnell said she never intended to open a yoga studio. The need for a balanced training regimen —  including flexibility, strength, and cardio — led to the addition of yoga. Client feedback eventually prompted her to add a teen yoga class, she said, adding that personal training sessions are now supplemented by as many as 20 group exercise classes each week.

“Many of the younger people we see in here are dancers or soccer players,” McConnell said. Students who place a higher-than-average strain on their bodies by participating in sports and other extreme fitness activities can benefit greatly from the practice, she has found.

“There is no wrong yoga,” said Julie Ewald, 42, co-owner of New Paltz Rock Yoga, the newest studio in town. But the competition for business is fierce.

Ewald, whose studio opened October 2, has seen a strong response already, with nearly full classes the first day. Ewald’s is also the only location to offer hot-yoga, also known as Bikram, taught in a 105-degree heated room.

“Every class is different but it shouldn’t be intimidating,” Ewald said. “Listen to your body;  you will get a kick-ass workout.”

Citing the need for affordable classes, Ewald hopes to draw students to the off-campus space, located on Main Street next to Moxie Cupcake.

For Rock Yoga, which offers specials like bring-a-friend-and-get-in-free (going on now through November 17th), and regular class prices $10 for students or ten classes for $80, advertising is an important tool for getting people to try something that maybe they haven’t before. Rock Yoga focuses on rock-hard bodies. Its approach to yoga as an athletic practice, with the emphasis on fitness foremost, leaves any mental or spiritual benefits up to the individual.

And don’t forget the rock music. In a Rock Yoga version of a typical Vinyasa class, recognized by a flowing movement through the postures, devotees can expect to hear anything from Radiohead to the Black Keys.

Modern locker rooms with showers are an added bonus–necessary after sweating through the 50 postures of the hot class, where, according to Ewald, participants could expect to burn up to 600 calories during the 90-minute session.

Ellen Bucciferro, 53, who has eight years experience as an instructor at Ashtanga Yoga, located on the downtown strip of Main Street, said business is steady. “It’s good. Not great, but good.”

New client sign-ups have led Ashtanga to add two new classes since the end of summer.

“Variety helps, and so does the consistency of the teachers,” she said.

Bucciferro attributes the growing business to the weather.

“It gets busier in the winter months when people aren’t outdoors as much,” Bucciferro said.

For those who are curious about yoga but don’t want to commit to a 10-class package, beginner classes make it easy for newcomers to start their yoga practice. Most of the yoga studios in New Paltz offer beginner classes.

For those who aren’t sure if classes of diverse groups of people in tight-fitting clothes, stretching their bodies in low-lighted rooms together is their thing:  ‘community yoga’ classes, where the cost is donation only, are offered on weekends at several studios in town.

With more than 10 locations to practice the breathing, stretching and meditating, there is a yoga studio in New Paltz to satisfy everyone from seasoned athletes to first-timers.

Fri Nov 9 , 2012
Campus Auxiliary Services (CAS) has started to make changes to campus dining and student eating options. CAS’ Executive Director, Steve Deutsch, said that along with the addition of the Shop24 vending machine, CAS is also looking to have a contract with a food service provider signed in the future. We […] 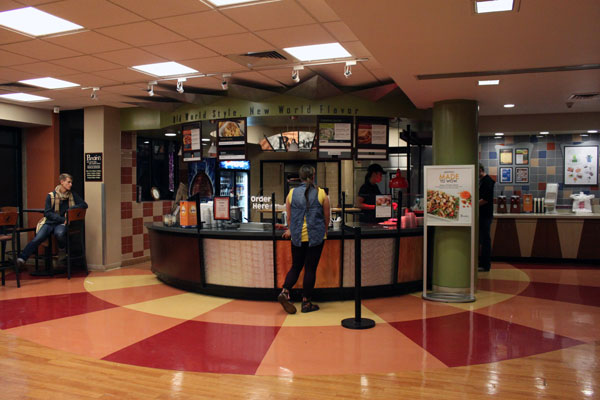