When D.A. Pennebaker landed his first prominent directorial role as head of the camera crew during the Monterey Pop Festival in 1967, he said he had no idea what he was doing. He simply sent the cameramen out for the day and hoped they came back with good footage. At the end of each day, the crew gathered and told stories about the amazing scenes they’d shot. Now, nearly 50 years later, D.A. Pennebaker has established himself as a filmmaking expert and a pioneer of the American documentary.

The United States today seems saturated with reality-based TV programming, but there was a time when such filming style was unheard of in American culture and popularized only in France as cinema verite. Acclaimed filmmaker and director Pennebaker helped to expose cinema enthusiasts to “direct cinema,” a casual, unscripted style of filmmaking that later became the basis for the likes of reality TV such as “Cops,” “Big Brother” and “Survivor.”

Pennebaker has been inspiring young documentarians since his first documentary short, “Daybreak Express,” in 1953. The Illinois native has since gone on to direct more than 45 films, which have earned him a lifetime Oscar from the Academy of Motion Picture Arts and Sciences. His early implementation of simultaneous sound recording, which began in 1967, along with his “direct cinema” style of filming have established Pennebaker as a forerunner in the film industry.

The “direct cinema” style he is known for is the basis from which many reality TV programs grew. PBS.org describes this documentary style as “a nonfiction variation on French cinema verite…their raison d’etre was to change the nature of documentary films by doing away with authoritative narrative voice-overs and interviewer questions, and attempting to capture events as they happened, without pre-planning or staging, or interference.”

Pennebaker has not let years of experience jade his optimism and enthusiasm for the film industry. He peppered his talk to a crowd of eager students, professors and media enthusiasts with as much excitement and humor as if he were just beginning his career. And in some ways, he still works in much the same way he did when he was younger: filming what interests him, directing without any sort of plan and hoping for the best.

When young filmmakers approached Pennebaker about why he chose to film largely without narrative, Pennebaker swore by his spontaneous, passionate methods and letting the subjects speak for themselves.

“I never plan anything because it would be like planning a love affair – what would you plan? It takes you by surprise,” Pennebaker said. “Every moment is a new kind of thing that attacks you and comes to you. The idea of planning negates the idea of it being an affair.”

He is known for pioneering the first sound-and-video syncing camera back in 1967. However, he says at the time, he didn’t view it as revolutionary. The tape recorders, borrowed from The Beach Boys, were only a means to getting the performers on the big screen. It was to be the first time a performance could be recorded as it was performed live, instead of recording the sound and video separately.

“I lived in total anxiety the whole time,” Pennebaker said of the first use of the cameras at the Monterey Pop Festival.

When a critic asked if he was “satisfied” with the work of two of his cameramen (at the time, filming sitar player Ravi Shankar), he decided to observe their work for himself. When Pennebaker saw how enraptured his workers were with the performance, he decided to film the audience’s reaction because they were so engrossed in the 45-minute set.

“I think if you watch those two guys shooting [the performance], you watch two people learning how to be filmmakers in front of your eyes,” Pennebaker said. “It’s amazing and I had no idea it would even happen.”

The cameramen were immersing themselves in the scene and capturing the heart of the performer – the simultaneous capture of sound along with the video allowed audiences to experience music as it was performed for the first time ever.

“Monterey Pop,” the resulting film released in 1968, exposed the world to rock artists such as Jefferson Airplane and The Who. Pennebaker went on to feature other influential musicians, such as John Lennon, David Bowie, Little Richard, Depeche Mode and Bob Dylan.

Pennebaker’s unique subjects (such as Dylan, in “Don’t Look Back,” and chef Jacquy Pfeiffer in “Kings of Pastry,”) tend to expose their personalities in his unconventional, unplanned style. He captures their personalities au naturel and does not attempt to “set them up” for the films.

Pennebaker talked about how he hadn’t thought of including full songs of Dylan’s in “Don’t Look back” and received criticism on how he seemed to portray Dylan unfavorably.

“I never saw it that way, but when we re-released a version with the full songs, I saw it,” Pennebaker said. “You could see his soul in his music – and you didn’t really see that in the original. I knew all of him, but I later realized you needed both.”

Pfeiffer, on the other hand, was far from famous when Pennebaker approached him.  He was simply a friend of Pennebaker’s who owned a pastry shop in Chicago before he entered the Meilleur Ouvrier de France (Best Craftsman in France) competition. The documentary wasn’t scripted, so there was no way to know how the film would turn out. When Pfeiffer eventually lost the competition, Pennebaker remembered thinking how horrible it was to put Pfeiffer’s disastrous moment on screen.

“But the wonderful thing about Jacquy – it didn’t throw him,” Pennebaker said. “It was one of my favorite films. Losing that incredible contest was, if anything, a test of his character, which was formidable and shone through that movie like a silver light.”

“We’re like children, and this is a language,” Pennebaker said. “We’re just beginning to understand how to do it.”

When aspiring filmmakers approached Pennebaker for advice after the lecture, he told them they should have brought their cameras with them.

“You want to use the film-making [as a] process of finding out something that interests you,” Pennebaker said. “It doesn’t need to be proper. As long as you’re interested, you keep going. When it gets boring, that’s when it should end.”

Thu Dec 4 , 2014
By Clare Quinn   “You came on a good day, we’re learning a song.” Liz Browne may be the president of the Sexy Pitches, but her presence emits that of a kind, older sister. A loose, oversized, light-washed jean jacket sprawls across her tiny frame; nondescript black leggings, a trademark […] 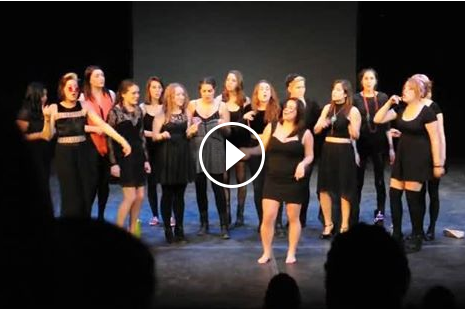