Calm Before the Storm

New Paltz residents raced to their local grocery stores to stock up on food, water and other necessities. Shelves once containing water, yogurt and milk were left emp

“I made sure I had plenty of food and went out to buy bottled water,” third-year student Gabrielle Blinderman said.

Students prepared for the blizzard in many different ways. Kate Taddeo, a third-year communication disorders major, didn’t feel the need to get ready for a storm, whereas Ali Sofen, a third-year media management major, made sure to stock up on soup and filled up her car with a tank of gas.

“After the whole hurricane gas fiasco, I knew it would be smart to fill up all the way just in case,” she explained.

On Friday, a declared state of emergency didn’t prevent several New Paltz students from frolicking in 13 inches of snow.

Snowstorm Nemo was an opportunity for third-year English major Matt Clarkson to wear his new snowshoes and explore. Clarkson, who lives on Millbrook Road, didn’t have to venture far though because a creek runs through his wooded backyard.

Despite being familiar with the terrain, “things look entirely different with the snow. And at night,” Clarkson said.

In addition to a handful of cross-country skiers, Clarkson said he encountered “plenty of people out there doing the same thing I was.”

Amid blizzard conditions, Dan Cassidy walked out of Gage Hall at 1 a.m. on Saturday and climbed up a snow covered pine tree. The second-year psychology major said he climbed 15 feet in two minutes before jumping down into a cushioned pile of snow.

“Getting down was a lot easier that night because I didn’t have to worry about breaking an ankle,” Cassidy said.

Also wandering in the snow Friday night was third-year student Alex Siegel and her friends. Siegel’s birthday was on Saturday, and she was not letting the blizzard get in the wa

y of celebrating at midnight. She prepared for the storm by stocking up on vodka, and had a get-together at her house for all of her friends.

Sofen was one of the many who ventured to Siegel’s house off-campus.

“It was quite a scene walking on Main Street in over a foot of snow at night, but it made it a great experience that I’m sure she won’t forget,” she said.

Those of age ventured to Murphy’s to continue the party with her, just the way she wanted her birthday to be.

Fourth-year computer science major Ranysha Ware didn’t have her morning classes canceled on Friday. When she returned to her residence hall, she spent the remainder of the day studying. Ware anticipated the snow would bring weekend hibernation so she bought extra pretzels at Oscar’s Friday night to that she wouldn’t have to go to Hasbrouck for brunch the next morning.

But Saturday afternoon, Ware, along with eight friends chose to do something different, and pose for a beach picture in the middle of the snow.
The eight were dressed in bathing suits, beach towels and sunglasses.

Samantha Lobo, a fourth year TV/radio production major was among the eight.

“We figured it would be a good bonding experience,” Lobo said.

Lobo approximated that the group wasn’t outside for more than 10 minutes.

“I don’t believe anyone saw us. It was pretty quick,” she said.

Fourth-year student Christine Riolo frolicked in the snow before retiring to her boyfriend’s apartment for the day.

“It sounds lame or lazy, but he met me half way and it was a nice little snow walk to take together,” she said. “It was something different to do.”

Professor of Geology Has His Evolution on the Earth, Future in the Stars

Fri Feb 15 , 2013
The snow in New Paltz may not be melting yet, but when it does, Alexander Bartholomew, associate professor of geology at SUNY New Paltz, will be ready. “You can find fossils right here on campus,” he said recently, examining a fossil from Ohio as he spoke. “Most people don’t know.” […] 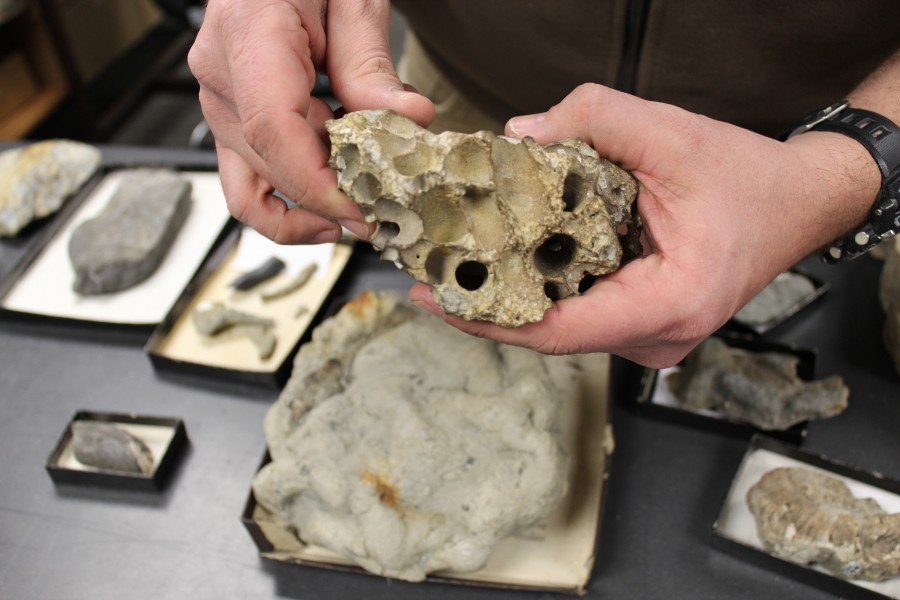