The snow in New Paltz may not be melting yet, but when it does, Alexander Bartholomew, associate professor of geology at SUNY New Paltz, will be ready.

“You can find fossils right here on campus,” he said recently, examining a fossil from Ohio as he spoke. “Most people don’t know.”

Named for a “three-greats” uncle he never met, Bartholomew is an avid explorer, world-traveler and musician. He is also the youngest professor in the geology department and the newest to gain tenure, only a year ago.

Bartholomew explains his passion for geology in simple terms that are understandable for non-science majors. But ask him too many questions and he begins to speak faster until, no-matter how simple the definitions, it takes effort to keep up.

He dusts off facts you never knew about your own backyard: the exposed rock layer that makes up the Catskill mountains dates back to the Devonian Age –about 415 million to 360 million years ago.

In the beginning of that unique time period there were only millipedes and “tiny little plants, 10cm tall at most,” but by the end it was “a full-forced eco-system with meter-long salamanders.”

As a child growing up in the Schoharie Valley, Bartholomew describes himself as being pretty observant. “I always found a lot of fossils,” he said. “My pockets were always full of rocks.”

That includes interpreting the record of sea-level change and fossil-community turnover.

“I try to figure out the dynamics of faunal change,” said Bartholomew, 34, who graduated with his PhD from the University of Cincinnati in 2006.

“I’ve been in school since 1983!” Bartholomew said. “The year I came out of grad school there were 11 positions open in the United States for what I wanted to do… I guess I got lucky.”

The professor who not-so-long-ago did his dissertation on the Marcellus Shale (the rock formation that makes up a large part of south western New York, as well as Pennsylvania, Ohio and West Virginia), a much-discussed potential location for the hydrofracking of natural gas, doesn’t have the passionate opposition to the controversial practice that some in Ulster County do.

“I’ve tried to remain as impartial as I can about [hydro]fracking,” Bartholomew said. “Some friends of mine work for gas companies. They hydrofrack thousands of wells a year in California, but you never hear about it because they have such strict regulations.”

The gas’ location is also is prime territory for historical discoveries. “New York has some of the oldest fossils that are land animals,” Bartholomew said. “West of the Hudson and south of the Mohawk [river] is marvelous for fossils.”

Bartholomew has searched for fossils around the world, including Australia, Siberia, Germany, England, Scotland and France.

In 2007 he was part of a group that received a $10,000 travel grant from National Geographic to look for fossils in recently-demilitarized southern Morocco. “We found 1,000 trilobites in seven days,” said Bartholomew. “Nobody had been there in a long time.” Morocco’s number one legal export is fossils.

For a paleontology (the study of the history of life on earth) class field trip in April, Bartholomew will take his students to Niagara Falls to look for fossils. One aspect of the class is for students to recreate the environment where fossils existed.

“A famous paleontologist told me, ‘you haven’t really seen anything until you’ve drawn it,’” Bartholomew said. Despite never having taken a drawing class, he is self-taught in the science of art. By reading a lot of books, and trial and error, he developed a lab for students to draw the fossils in order to be able to really see what they are learning about.

“Alex is the ultimate fossil guy!” said Glenn Geher, director of evolutionary studies and the chair of the psychology department at SUNY New Paltz. He has a strong background in the integration of biology and geology, according to Geher. “When I first met him years ago at a faculty get-together at Bacchus, he pulled a fossil of a trilobite out of his pocket –from several hundred million years ago- that he’d found while walking around that day.”

A trilobite fossil isn’t the only thing one might might expect Bartholomew to pull out at a bar in New Paltz. He has been playing the bagpipes since age 11 and has been known to make guest performances in the faculty punk-rock band, Questionable Authorities.

With a background including Scottish, French-Huguenot and Native American heritage, Bartholomew also plays the bombard, a Celtic woodwind instrument from Bretagne, France. According to Bartholomew he is, to date, the only non-Bretagne to ever learn the instrument and then perform in competitions at the top-level.

“It’s mostly music for dancing. It’s really cool,” said Bartholomew, whose friend Yoann, a Bretagne-native and sometimes chaperone/photographer of geology department trips to places like the Grand Canyon, Death Valley and Yellowstone introduced him in Bretagne. “For two months I lived on couches. They took me around to look at rocks and [we] went to parties,” said Bartholomew of the time he spent in Bretagne learning the bombard.

Bartholomew is a founding member of Bagad New York. Bagad means “company” in Breton, specifically a company -or band- made up of bagpipes, bombards and drums.

A world of bright possibilities

They hold classes at similar times if they can, allowing for less conflict in personal schedules. On a break Forestell visits Bartholomew’s office, which he has only been in for a year but is so full of family history and geological treasures it is baffling how he would ever manage to move it again. There are bookcases lining the walls, an old wood and leather chair from his grandfather’s law office and a dirty scooter crammed behind the door.

Sharing Bartholomew’s love of experiencing “new places, new food and new people,” Forestell, 33, is a star in her own right. One of their first big trips together was last summer when Forestell was invited to the Mars Rover Landing at the NASA Jet Propulsion Laboratory in Pasadena.

A member of her high school robotics club, Forestell earned a doctorate in astronomy from the University of Texas at Austin.

They can talk for hours about science, and sometimes guest-teach in each other’s classes to give further insight to students, according to both. “Our material overlaps a lot,” Forestell said.

They are both the first scientists in their families.

They also affectionately refer to each other as “Doctor,” and tell stories in a tennis match of vignettes, going back and forth, each adding to the tale until both are laughing and a shared delivery of the ending makes it love – love.

They don’t forget they are being interviewed.

“Did you tell her about Wednesdays?”

“We probably win half the time.”

“Last semester we won eight times in a row.”

Bartholomew is the most recent in a lineage of male only-children, dating back five generations. Forestell is a middle child. “I like to show [that] girls can be girly and scientists at the same time,” she said.

“Little kids love two things: sparkly minerals and fossils,” said Bartholomew. He has learned a lot more than he once knew about the rocks he played with as a child, but that doesn’t seem to have taken any of the fun out of it.

Bartholomew’s first book will be published by Springer, due out in March. Macro-Evolution in Deep Time was co-authored by Rituparna Bose, an expert on the fossils that Bartholomew collected and wrote about as part of his dissertation.

Bagad New York and the Questionable Authorities will perform for their first time together at Snug’s Harbor in New Paltz on Friday, May 10. The performance may include a rendition of Run, Run Away complete with bagpipes. For more information visit www.bagad.us, find Questionable Authorities on Facebook, or contact the SUNY New Paltz Geology Department at 845-257-3755.

Sat Feb 16 , 2013
At 9:50 p.m. on a Thursday, many SUNY New Paltz students are found shut up in their rooms studying, while others may be heading to Tower Hour in town. But in the Elting Gym dance studio, the Culture Shock Dance Team auditions were beginning, and tension, as well as hip hop […] 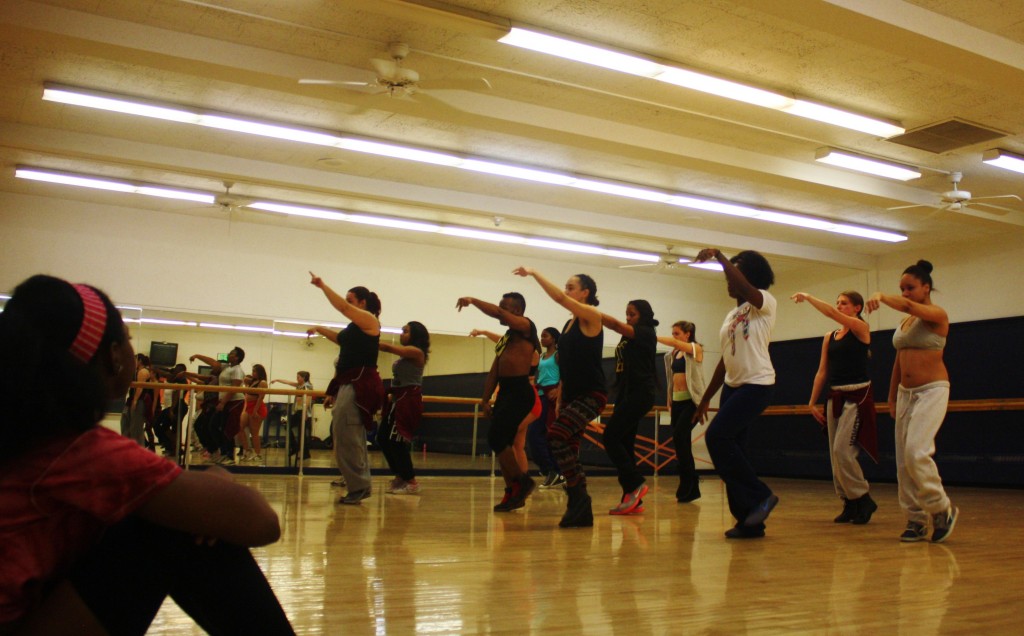