With the presidential election a little over a month away and the deadline to register to vote, Oct. 12, only a week away, political fervor is in the air. As a result of the first debate on Oct. 3, social media was overrun with opinions and comments regarding the statements made by the two presidential candidates.

A Gallup poll taken Aug. 27-Sept. 16 found that 63 percent of registered voters, ages 18 to 29, said they “definitely” plan to vote. This, however, is in comparison to a Time/Abt SRBI poll, taken September of 2008 that stated 79 percent of young registered voters definitely planned to vote.

There are many factors that play into the apathy of the youth vote. Some young people are not interested in politics and don’t believe that politics affect them. Other young voters may feel dissatisfied with the current political sphere, burned by the “hope” and “change” message that seems unfulfilled by the current administration.

“We are the mini-boom generation. If 50 percent of the young people in our country showed up to the polls, we could decide the election,” said Wood.

As SUNY New Paltz coordinator for two years, Wood is responsible for getting the word out to vote on campus.

NYPIRG’s voting initiative comes in three steps. The first is registering students to vote. NYPIRG sets up tables throughout campus with voter registration forms and urges students to register, especially in New Paltz.

“Students should vote where they’re going to school because local legislatures are making decisions that affect them at school, like tuition,” said Wood.

So far, 1,200 New Paltz students have been registered by NYPIRG.
The second part of the voting initiative on campus involves voter education. NYPIRG is planning a panel between political science and international relations professors to discuss the candidates and their policies. The panel will be held sometime in mid to late October.

The final step of the voting initiative is to spread the word to vote through phone banking and directing students to the polls.

This method is proven to work. In a study conducted by CIRCLE, (The Center For Information & Research On Civic Learning And Engagement) contact is one of the most effective methods of voter mobilization.

According to the Times Herald-Record, Ulster County voter registration topped at 70 percent in 2008 and continues to have the highest voter enrollment of the surrounding counties.

The current political election is discussing many issues that affect college students. Student debt, healthcare, women’s issues, and the job market are all issues young people are facing or will face in the near future. Registering and voting are small steps young people can take to add their voice to the political spectrum.

“Political parties pay attention to who turns out to vote,” said Wood. “They are more likely to push initiatives that positively affect those groups that had the highest voter turnout.”

A Picture is Worth a Thousand Words

Sat Oct 6 , 2012
Michael Gold walks down the stairs into a dimly lit room. He flicks the switch and hundreds of faces stare back at him. Former first lady Hilary Clinton, former Vice President Walter Mondale, Tito Puente, boxer Floyd Patterson and the founder of Cablevision Alan Gerry, are all assembled along Gold’s […] 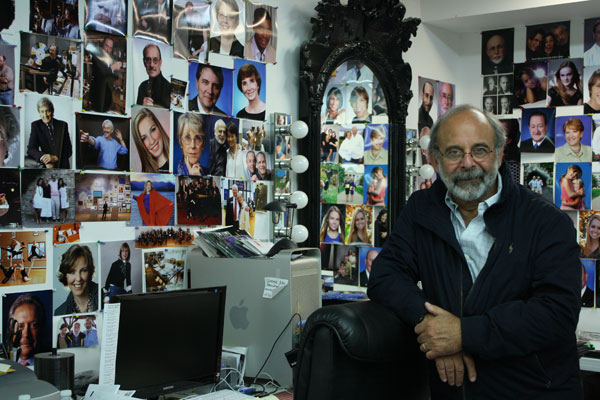