Michael Gold walks down the stairs into a dimly lit room. He flicks the switch and hundreds of faces stare back at him. Former first lady Hilary Clinton, former Vice President Walter Mondale, Tito Puente, boxer Floyd Patterson and the founder of Cablevision Alan Gerry, are all assembled along Gold’s photography studio walls in portrait form.

Gold, 70, went to Boston University as a history major. His father was a photo enthusiast who had a dark room in his basement. There were trays, devices and yellow light. His father put white sheets of paper into the trays full of water and a picture appeared.

That was the moment he realized he wanted to go into the arts.

Gold went to the assistant dean of the university and switched his major to art. Without his parents’ financial assistance, they believed the arts was an impractical profession, Michael became a businessman and started to sell art supplies to students.

“The university tried to shut us down,” he said. “We were beating them.”

The administration sided with the art major and he made enough money to get himself through school.

His fiery intensity for art still radiates through him.

He said this after speaking about how he broke into the New York Times magazine by sending his portfolio to the editor.

“Come back in six months,” the editor said.

Gold’s “burn” was to never hand in something that didn’t reflect his capabilities. If an editor asked which photo was his favorite to hand in, he wanted to say all of them. He also refused to hitch on to other photographers’ ideas.

“Why do something if it isn’t your own?” He thought. “I don’t want to be known as an Ansel Adams type of photographer.” He has nothing against Adams, but wanted to forge his own path in the photography world.

The obscure attracts him. His father-in-law, an avid fly-fisherman, put Gold on to Lee Wulff, one of the most influential fly-fisherman in history. Call after call was made to Wulff’s house by the Beaverkill River in upstate New York. Wulff’s wife would answer the phone and turn Gold away. Then one day Lee answered the phone.

Gold pleaded with the fisherman to sign his book, Trout on a Fly for his father-in-law’s birthday. Wulff agreed and soon enough Gold was on his way to Beaverkill from his home in the Hudson Valley.

Upon arriving, Wulff asked Gold in and the two hit it off. Five hours of conversing later without once mentioning fly-fishing or photography, Wulf said, “Sorry, I have to change.” He explained he was being honored at an award ceremony and had to get ready.

Lee entered the kitchen, turned and said, “I’ll do your project.”

Wulff had somehow sensed Gold’s true motives for the visit. Gold had passed whatever the Wulff standard was and he went on to shoot a documentary on the sportsman. Wulff died before the end of filming from a heart attack while renewing his flying license.

We’re back in Gold’s studio and he is pulling out photo after photo. He walks past three white fold up tables. You can only tell they’re white by looking at the side rim because they are totally covered in stacks of cds, prints and books. After the tables are a couple bookshelves on the far wall where hundreds, if not thousands more CDs reside.

“If I taught a photo class, and my students took less than a 1,000 photos a week, they would get a D,” he said. On the one table he pulls out a card on top of a stack of large prints.

These are for his next show. He doesn’t want to give too much away. He simply says there will be portraits, landscapes and impressions. The show will be held at the Gardner Library on Oct. 28 from 1-3 p.m. It will be a one-man show displaying his photos from Provence, Tuscany, and The Costa Brava and will run until January. His flyer reads, “Make an impression. I’ll be Photographing.”

The Road to Hollywood is Paved With Funnies

Sat Oct 6 , 2012
An Ulster County resident is making a big splash in Hollywood. Andrew “Andy” Pagana, who shares a home between Ulster County and Burbank, California, has been working hard to brand himself and pave his own path in Hollywood. Born and raised in Newburgh, Pagana always had a penchant for film. […] 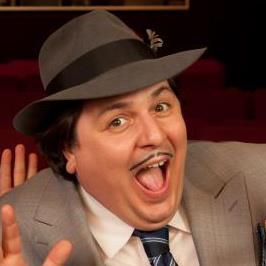