Weather data collection hasn’t changed much in the last 114 years, although the climate has.

The fourth annual installment of the Dennis O’Keefe Memorial Lecture showcased the human element that is used to gather and maintain data at Mohonk Mountain House and the preserve, as well as phenology (the dynamic between plant/animal cycles and climate).

Brief mention was given to the memorial’s namesake, who was an avid weather aficionado and postcard collector. O’Keefe was also a firefighter and five of New Paltz’s bravest were present to honor him.

A wealth of analytical data has been collected over the span of the last 100 years plus. The researchers, or “Cooperative Observers,” have collected weather reports three times daily, using only a brass bucket and two thermometers, often trudging through high snow squalls and torrential downpours when weather is inclement. Some of these adverse conditions have moved 500-pound boulders, and on another, less wet occasion, razed 3,000 acres of forest (something now controlled with planned burns). The worst snow fall seen boasted 123 inches of snow in winter of 1995/1996. The average is 59 inches yearly.

Researchers use personal observation over complicated equipment, filling out data sheets with 18 variables by hand and using descriptive language to flesh them out “in great longhand and great detail”, much as was originally done when the Smileys purchased the area. While originally done as a measure to ensure a better rounded experience for visitors, the database is now used nationally by researchers and the National Weather Service to compare and correlate information.

Some trends recorded have been the increase in mean average of temperature, which has resulted in snow storms ending in rain. Freezing rain is the worst, Huth notes, as it causes catastrophic destruction to trees and their limbs. Furthermore, this tendency in precipitation has resulted in less packed snow, correlating in an increase in deer population. This, in turn, has resulted in a larger tick population. Huth reminds the attendees that the stone wall may look comfortable to lunch on, but its vermin population makes it a breeding ground for the arachnids.

Huth closes with a turned quote from Benjamin Franklin, “Some people are weather wise, but most are otherwise. Our friend Dennis O’Keefe was weather wise.”

Fri Oct 1 , 2010
It is 7:30 a.m. on July 6. Ashley Barraud, 19, hops into her green Toyota Camry and begins her 25 minute drive to Clayton Huey Elementary School in Center Moriches, Long Island. The drive is familiar to Barraud who attended the school as a child. Upon her arrival, the school […] 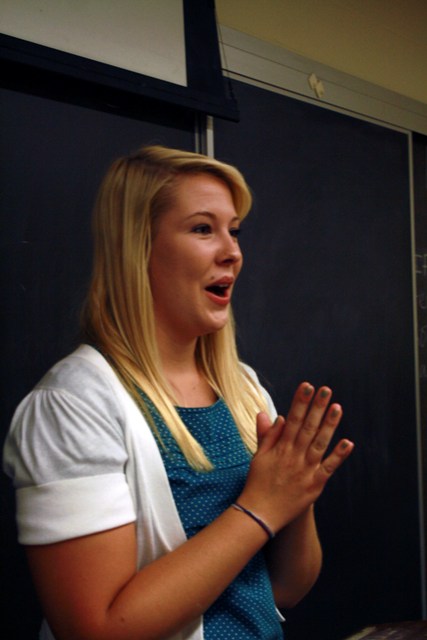