Hurricane Sandy devastated the East Coast on Oct. 29, 2012, but it may not have been the worst or last superstorm Americans will see for years to come, according to CNN.com.

Sandy is just a taste of what future superstorms will be like, Princeton Professor Michael Oppenheimer said. In the long run, citizens in the northeast will experience hotter temperatures and higher sea levels. They can also look forward to more intense storms and loss of some ecosystems and species, he said.

“We can expect to see both stronger hurricanes and also higher surge levels due to both the stronger storms and the higher sea level,” Oppenheimer said.

Although recent studies have linked the global climate change or global warming to storms and erratic weather patterns, Oppenheimer said Hurricane Sandy cannot be attributed to climate change. It had such a large impact because global warming has caused sea levels in the northeast to rise by about one foot.

SUNY New Paltz sociology Professor Brian Obach said he believes we are experiencing climate change right now through various storms and weather patterns, and that “more and more scientists are saying that we have to acknowledge this is happening.”

Obach said that more Americans are beginning to acknowledge environmental changes are happening and since last year, public concerns of climate change and environmental well-being have increased in the nation.

According to the 2012 Yale Project on Climate Change Communication study, 77 percent of Americans said global warming should be a “very high” priority for the congress and the president, and 92 percent said that government officials should invest in developing clean energy sources.

In the aftermath of Sandy, New York Gov. Andrew Cuomo and New York City Mayor Michael Bloomberg are activating environmental reforms and the prevention of future destruction from storms to come. Bloomberg said in the CNN article that he wants to “mitigate future storm surges and flooding along the city’s 500 miles of coastline.”

Gov. Cuomo agrees that global warming is occurring and that it’s difficult for anyone to deny it.

“After what happened, what has been happening in the last few years, I don’t think anyone can sit back anymore and say ‘Well, I’m shocked at that weather pattern,'” he said in the article.

Obach said that there are still groups out there who deny climate change is happening. He called it “the climate denial machine.”

The vast majority included in this “denial machine” are energy and oil companies who are out to protect their resources and avoid the fact that climate change is happening due to emission of greenhouse gases, he said. They hire one scientist and pay him or her to speak out against climate change, Obach said. He also said the Republican Party that traditionally sides with large companies and the oil industry denies climate change as well.

During his acceptance speech at the Republican National Convention, Gov. Mitt Romney said that President Obama wanted to slow the rise of oceans, but Romney joked that instead of doing this, he would help American families, according to the Huffington Post.

“At minimum, we will face social and ecological disaster,” he said. “We can reduce that by taking action, but that action is great. I don’t see it here.” 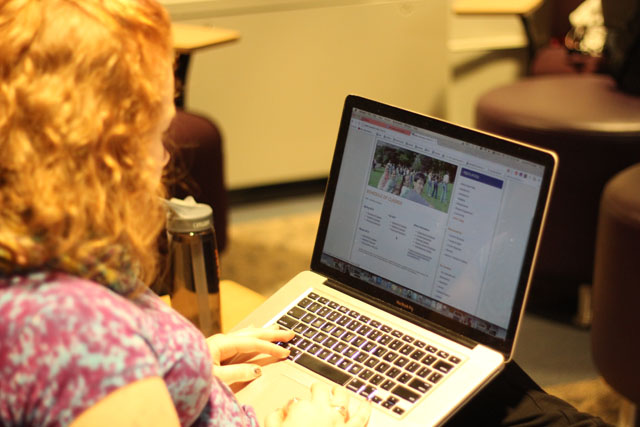