The reasons why most students will graduate with crippling debt.

Student loan debt is closing in on the trillion dollar bench mark, which is predicted to be reached by the end of the month. Many news outlets have started reporting the climbing debt as a bubble ready to burst in an already weak economy that will drive graduates into a tightly wound lifestyle. At this point the debt clock is at approximately $995 billion, with an average of $25,250 per graduate of 2010 according to the Project on Student Debt. Tuition has double in the last 10 years, increasing at twice the rate of inflation, according to the National Center for Education Statistics.

In a time when everyone is entitled to Financial Aid, some think it’s time for a reform in how students receive aid to pay for their education. Others believe that accessibility of aid is not the problem; it is the driving costs of tuition itself.

Amanda Sisenstein, member of Occupy SUNY New Paltz, believes that lack of aid and rising tuition costs can only put higher education further out of reach.

“I know funding is an issue…” Sisenstein said. “The reason we need to take out more loans is because the state is putting less money into education.”

After the $289-million cut from the state budget passed in March, approx. $1.4 billion has been cut from SUNY’s operating budget within the last four years. In addition, the state has mandated tuition increases in the past and a plan that will continue to raise tuition by $300 every year for five years.

These yearly increase, Sistenstein says, puts further strain on students, who receive a fixed amount of aid and salary, forcing them to take out more loans.

“Students eventually need to take out private loans mid- education because they can’t drop out or else the years they’ve been there won’t make it worth the small amount of debt they’ve already got. They need a degree,” she says.

The job market is another issue that puts indebted students at risk of defaulting on loans. Sistenstein explains that new graduates are forced into taking lower paying jobs outside their degree because experienced and over qualified individuals are taking them from being laid off from previous jobs.

“A better job market would be less of a burden but loans and tuition are still too high,” Sistenstein says. “My main solution: create jobs and lower cost of tuition.”

Daniel Sistarenik, Director of the Office of Financial Aid at SUNY New Paltz, finds that the issue is far more involved and accumulative than simply rising tuition, inflation and the job market. He feels that the government is partly to blame for a system that doesn’t work anymore.

“Student loans are so readily available,” Sistarenik explains. “Financial aid became available to all after 1993 and people started borrowing more and more which increases the loan limit.”

The government now requires financial aid departments to inform students of loan options whether or not they feel students need them. Several programs are offered based on income, but both Sistarenik and Sistenstein agree that cuts to these programs, no matter their success, are one reason for the unnecessary rising student debt.

“But those who do have to borrow still don’t get enough grants.” Sistarenik says.

Another issue is lack of planning and understanding from families and students. Parents didn’t have staggering debt after college and therefore it falls onto the student to understand their debt. And in the age of the internet, students may not really be getting that information from anyone.

“We used to have an entrance interview where you’d sit with a loan counselor one on one. Now it’s all online,” says Sistarenik.

The economy overall hits hard on families as well, being less able to contribute to student’s education to relieve some burden. And with little jobs available, students can’t find work close by, or have to buy a car in order to commute to a job.

“Everything is tightening up,” Sistarenik explains. “… I think the solution is free tuition for first year. But I don’t think government should default loans because it’s not fair to those who paid.”

The advice Sistarenik can give to incoming students is understand what you are borrowing, have a plan and make sure your major can offer a job.

“Everybody wants to come here but taking out all this loan debt is not realistic,” Sistarenik says. “Education should be looked at as major investment and you should have a plan.”

Student loan debt and tuition costs are only expected to rise and some project the student debt bubble to be the next tipping point that will continue to weaken an already limping economy. 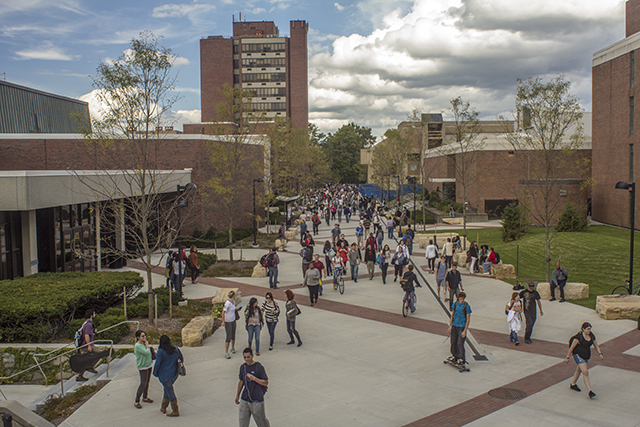