When asked about how important reducing carbon footprint is, David Kamerman, a third-year history major at SUNY New Paltz answered without hesitation.

“It’s probably the most important thing you can do,” Kamerman said. “Other then breathing of course.”

What is a carbon footprint? Sociology Professor Brian Obach, who has been working at SUNY New Paltz for 12 years and is the founding member of the SUNY New Paltz Environmental Task Force, defines it as the measure of CO2 released as a product of human activity. It is not just the amount of driving or flying that a person does, it is also what kind of products, disposable or reusable, that they use.

“(We need to) reuse things, recycle what we can’t use, buy used things if we absolutely need to buy something,” Obach said.

Walking or riding a bicycle to school instead of driving everyday is another way to reduce. As a resident of the Village of New Paltz, Professor Obach walks to campus everyday. Another way he reduces his carbon footprint is by being a vegetarian. He started 25 years ago because of an ethical animal rights sentiment. He now buys organic because the ecological implications from factory farms are devastating.

Sam Morello, a second-year sociology and media management major at SUNY New Paltz, also eats organic when it is affordable because she believes it is for an important cause. For transportation, she has no car and rides her bike whenever she can.

“Its pretty easy in college though, because you don’t need a car,” Morello said. “Especially in New Paltz.”

Ari Kovics, a secondary education in English major at SUNY New Paltz, says that public transportation is a great way to reduce if the area has it. She says New Paltz is a great place to walk because everything is so close. She has a car but uses it sparingly.

“I ride my bike and try to walk to class,” Kovics said. “And when I do go to class in my car I try and bring friends so we carpool.”

Gary Buckman, assistant director of facilities operations, says that he is working to centralize the campus for walking and biking. The Main Academic Concourse, the area from the library to the humanities building, was repaved last summer and construction for the Mohonk Walk will be finished by summer 2013. He explains that there are currently 62 bike racks on campus but more are to come.

“As the master plan takes place, we will be adding more,” said Buckman. “Students are chaining bikes to light poles and stairs which creates a tripping hazard and means that there just aren’t enough racks.” According to Garry Nack, construction manager at SUNY New Paltz, 12 new bicycle parking areas have been installed on campus since last year. Another effort put forth toward campus transportation was the new concrete paving in front of and to the sides of Hasbrouck dining hall, which leaves more green space for plants.

Matt Moskowitz, a third-year art history major, is an avid skateboarder who says the new paving is great. When asked about what he thinks of the town’s carbon footprint, he said that people drive entirely too much.

“New Paltz always has so many cars,” Moskowitz said. “That can’t be good for the environment.”

Professor Obach believes that to steadily reduce carbon footprint, people need to be politically involved in future plans of reducing. He explains that its not just about personal lifestyle choices. By engaging in policy, whether it be university, state or federal, there are ways that people can have much more dramatic effects on reducing carbon output.

“The scope of the problems we are facing, especially in terms of global warming and climate change require much more drastic action than we are able to achieve just by making decisions about what we consume,” Obach said. “We need to change policy. We need to change laws. We need to create a structure in our society that facilitates people reducing their carbon footprint.”

He urges students to get involved in groups or organizations that push for these policies. Since 2005, Professor Obach has been a part of The SUNY New Paltz Environmental Task Force, a group made up of faculty and students who work toward long term plans of reducing carbon footprint.

Plans include reducing reliance on heating and cooling as well as use of solar power and biomass fuels. Biomass energy is harnessed by burning wood and grasses for fuel. Although burning plant matter lets out CO2 emissions, the plants naturally consume CO2 when they go through photosynthesis.

The transitions movement is a community focused environmental movement that works to reduce waste and deal with it locally. Instead of the previous compost facility which was hours outside of New Paltz, the group made a deal with the town of New Paltz to have food scraps from campus go to a local compost facility. This closes the loop of resource use because the campus can use soil produced by it’s own compost. As far as the New Paltz community goes, Obach believes that people are doing outstanding work. The Inauguration of President Donald Christian 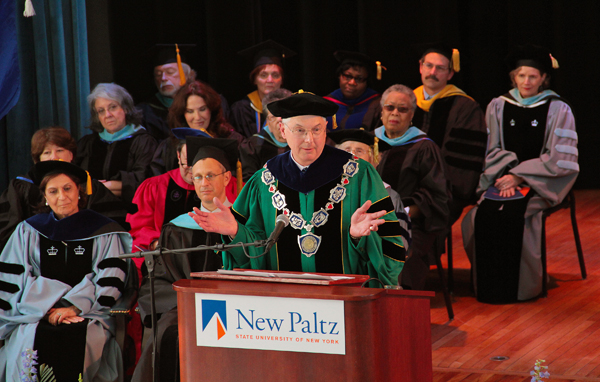