Beneath College Hall, the almost untouched Rooms 45 and 46 were once a part of SUNY New Paltz’s fallout shelter.

In February 1963, the plans for Fallout Protection Building No.7 were drawn up for SUNY New Paltz. The shelter would be designed to hold approximately 2580 people.

Louis Roper, a history professor at SUNY New Paltz, explained how important disaster preparedness was in the 1950s. It was part of the effort to protect America in case of nuclear warfare brought on by the Cold War. From 1945-1991, during the Cold War, there was great tension between the West and Communist countries, primarily between the United States and the USSR. Neither side followed through with direct military action on the other. Both sides possessed nuclear weapons and, if conflict arose, could have started a devastating war.

“There was a great fear of the unknown,” Roper said. “People were terrified.”

In the 1961 Department of Defense (DoD) booklet, “Fallout Protection – What to know and do about nuclear attacks”, instructions are given about how to create, stock and maintain a personal shelter in the case of nuclear fallout. It also sheds light on what would happen in the event of nuclear attack.

According to the booklet, “The blast, heat, and fire of a nuclear explosion are appallingly destructive. But radioactive fallout could spread over thousands of square miles, covering a much greater area than the area endangered by fire and blast. Fallout would be a potential killer of millions of unprotected persons, but it also is a hazard that individuals and communities can prepare for through reasonable programs and actions. A fallout shelter program is one of these.”

This booklet and other DoD materials are found on the Civil Defense Museum website, http://www.civildefensemuseum.com/, a comprehensive curated online museum of artifacts and memorabilia from that era.

Although artifacts are scarce, people still recall the events. Martin Rutstein, a geology professor at SUNY New Paltz for 42 years, described what it was like as a teenager in the cold war era.

“My parents kept extra canned goods in the house in case of emergency,” Rutstein said. “In school, we practiced bomb drills where we would kneel underneath our desks and cover our heads.”

According to http://www.civildefensemuseum.com/shelsupp.html, the Defense Civil Preparedness Agency procured 165,000 tons of food for the stocking of fallout shelters in the early 1960s. The supplies were granted to the States and localities and were placed in approximately 100,000 fallout shelters all over the United States from 1962-1970.

These were minimal survival supplies for an allotted 2 week shelter stay to provide each occupant with 1 quart of water per day, 700 calories of food per day, sanitation supplies and radiation detection instruments.

Remains of supplies given to New Paltz are still around. In Old Library, one of the garbage pails located in the printing press room was once a storage container for drinking water. It’s stained and scuffed label dates it back to July 2, 1962 and shows that it was sent from the Schenectady Army Depot.

More remnants from the fallout shelter are located in Room 45 below College Hall. The door barely opens but inside is a dark room containing two rows of dust covered fuel barrels separated by a cement wall. The room was converted into a bathroom for emergency situations later on. Each barrel has steps leading up to a metal opening covered by a toilet seat.

David Smith, an architect for SUNY New Paltz since 1993, recalls cleanup of the fallout shelter in the late ‘80s and early ‘90s.

“During a plumbing project, the rooms of the fallout shelter were cleaned out,” Smith said. “There was a lot of junk down there.”

William Connors, the interim dean of the Sojourner Truth Library, came to New Paltz in 1966. He said that by this time, most of the supplies given to SUNY New Paltz had gone bad and were thrown away. This may be why most of the artifacts have disappeared over the years.

“Although shelters still existed, a Soviet threat was no longer an issue by the end of the ‘60s,” Connors said.

The Cold War opened people’s eyes to the issue of disaster preparedness. Though 60 years have passed, the fear and scale of such an emergency and the potential power of a nuclear catastrophe are still raw in the minds of our society.

On Friday, April 20 The Institute for Disaster Mental Health is holding their 9th annual conference at SUNY New Paltz. The event is sponsored by the NYS Office of Emergency Management, SUNY New Paltz Campus Auxiliary Services and the NY/NJ Preparedness and Emergency Response Learning Center. The conference will feature presenters who are experts on the interrelated work of mitigating the stress and maximizing the rewards of trauma work.

Though the fallout shelter at SUNY New Paltz was never used, it serves as a reminder.

Thu Apr 12 , 2012
Students fighting in an elementary school classroom often ends in a trip to the principal’s office. However, sometimes a teacher may find himself in that seat instead in front of the police as well as the principal. If a teacher pulls one student off another during a fight, he may […] 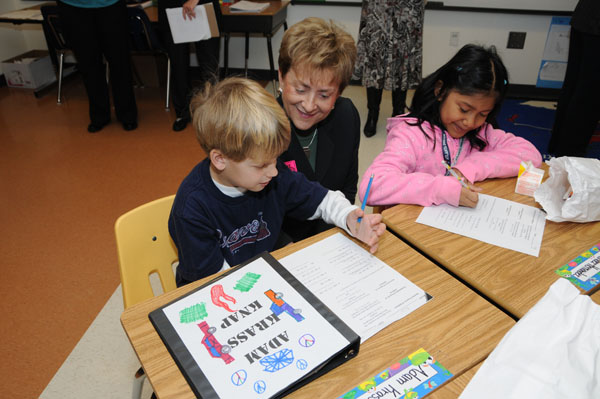