Faculty and students filed into the Honor’s Center, anxious to hear professors from the State University of New York (SUNY) at New Paltz read their original poetry. The room went quiet as Howard Good, one of the night’s featured poets, approached the podium to announce Dennis Doherty as the first reader. The audience erupted into a loud applause.

“Now, you realize when I come up if you don’t do the same, I’m going to be crushed,” said Good jokingly.

This marked the beginning of the evening’s reading, an event where many came to see their professor in action or just to listen to live poetry. Doherty stepped up to the podium calmly, clad in jeans and cowboy boots. The professor wears many hats; he serves as director of the creative writing program at SUNY New Paltz, chair of the poetry board and a creative writing and literature instructor.

“Dennis, Papa, Papa, Mr. Doherty, dear,” Doherty read, as the audience watched in silence. His poem alluded to the many faces of Doherty that are portrayed within a day.

A crowd favorite was “Epic,” a mock-journey about the world’s fascination with technology, inspired by Joseph Campbell and his ideas of the hero. Doherty referenced major technological hang-ups including Facebook, Xbox, cell phones and other developments that he feels distract more than they inform.

“Go to rate my me. ‘I supposed he was sort of OK, but all hung up on his own breathing and shit, and it’s like, what about my happiness?’” said Doherty, mockingly speaking about students’ comments on the website, RateMyProfessor.com.

The audience roared with applause at the end of Doherty’s set as Laurence Carr approached the front of the room.

Carr, a dramatic and creative writing instructor, displayed his love for drama when he read his poetry. Unlike Doherty, Carr walked all around the podium, hands flailing and voice booming.

Carr’s first poem focused on nature, describing a slug sitting in a glass of beer. However, his poetry quickly turned into more worldly satire. He took a political turn with a poem about Osama bin Laden hiding out in the mountains called “Khyber Pass Ramble: A Fragment of an Open Letter.”

Good was the last to read. He is the coordinator of the journalism program at SUNY New Paltz and the author of 18 print and digital poetry chapbooks. He is also co-editor of the online literary journal, Left Hand Waving.

His poetry is short and often bitter, as he said, with selections focusing on the idea of love in all of its different forms.

“It isn’t love if our embassy isn’t burning,” said Good, reading a line from his poem, “Lovesick.”

Though Good’s poetry and explanations often evoked laughter from the crowd, he also touched upon somber topics in selections like “Songs Without Words,” a poem about a student of his that passed away.

“The clock deserted her and ever since it isn’t late but it feels it,” he said.

However, Good’s reading took a different turn when he shared “Pig/Iron,” a poem he wrote when he found out pigs can have an orgasm for thirty minutes.

“I thought to myself, that’s a poem,” he said as the audience laughed. “Well, it is.”

When the night came to a close, many students said they were thoroughly impressed with each poet’s ability to show emotion and feeling through their words. Some said they felt like it gave them hope to pursue a career in creative writing.

“I was surprised to see how many people were here,” said Cliff Venho, a second-year creative writing major. “As an inspiring writer, it’s good to see so many young people come out to support and celebrate local writers.”

Thu Apr 29 , 2010
Big thanks to everyone who stopped by to celebrate our re-launch with us! It’s always nice to have the support of friends, family and fans, old and new. Special thanks to the Slam Poetry team for the entertainment and to the awesome catered food that Major Connections afforded us. Gratitude […] 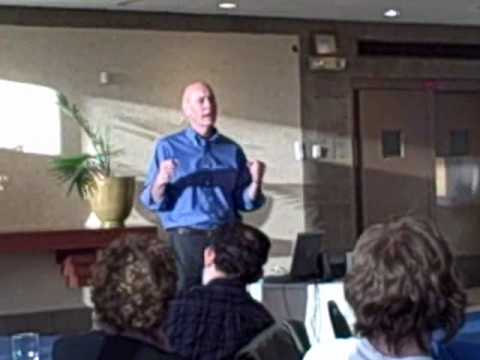