Students fighting in an elementary school classroom often ends in a trip to the principal’s office.

However, sometimes a teacher may find himself in that seat instead in front of the police as well as the principal. If a teacher pulls one student off another during a fight, he may end up under arrest for assaulting a child.

“What do you do?” asked Joe Pesavento, director of the Mid-Hudson Teacher Center, at “What Every New Teacher Should Know,” a free conference sponsored by the center at SUNY New Paltz.

One of the 22 prospective and current teachers raised his hand. “I watch Law and Order,” he said. “I don’t think you’re supposed to say anything without a lawyer.”

In situations like that, teachers can be defended by their union representative instead of lawyers, said Pesavento, who is the president of the Malboro Faculty Association and has taught for more than 30 years.

The conference, which is held several times a year, exposes how the education system works, he said, and what a teacher’s responsibilities as a part of this system are.

“You can’t expect the district to hold up its end of it if you aren’t holding up yours,” he said.

New teachers face several unique challenges, he said, such as being fired due to cuts in funding because of the recent two percent property tax cap, not measuring up to a new evaluation system, as well as a new retirement system group, or tier, costing them thousands of dollars over their career.

According to Pesavento, the Charles Dickens line, “It was the best of times, it was the worst of times” sums up the current climate of New York state’s education system. For example, teachers have a competitive starting salary with the business world, he said, as well as “pretty damn good” benefits.

However, said Pesavento, public opinion has turned against teachers in recent years.

“We are the cause of evil,” he said. “We are responsible for lousy test scores.”

It was adopted Feb. 16, a move Board of Regents Chancellor Merryl H. Tisch and State Education Commissioner John B. King praised because according to a NYSED press release, it will protect more than $2.5 billion in federal Race to the Top funds and other education funds over two years, and help improve student performance.

The evaluation system, which Pesavento describes as “very tough, very rigorous,” will be divided into three categories with a top score of 100 and possible grades of highly effective, developing, or ineffective. Pesavento said the system is good in concept because it removes subjectivity and bias in the evaluation process, but that basing so my points on standardized testing is like “flying the plane while you’re building it” because the system lacks provisions for how students who, for example, don’t come to school often or are part of a transient population, affect test scores.

20 points will be based on how the scores of students on standarized test compare with those they had taken the previously in the year or during the pior school year.

NYSUT Present Richard C. Iannuzzi said, “Our students are more than test scores, and more goes into great teaching than just a single score on a single test on a single day.”

Another 20 points are awarded according to a locally designed assessment which will vary by district. This rubric can be bought from an agency, designed by a local BOCES, or made by a department or group of teachers.

“I say our classrooms are now crime scenes” said Pesavento, because these rubrics require detailed information to support an evaluator’s assessment of a teacher.

Multiple factors will decide how the final 60 points are distributed. A minimum of 31 will be based on classroom observations by certified evaluators. The remaining 29 may come from evidence binders, which are portfolios full of, for example, samples of assignments, student work, positive letters from parents or coworkers, or education awards.

No districts have implemented a concrete system yet, said Pesavento, but he knows of some that are doing test runs of possible systems. Schools must have a plan in place by Jan. 17, 2013 or they risk losing state aid increases.

If a teacher graded as developing or ineffective, they will be “given a tip” and placed in a Teacher Improvement Plan (TIP). This plan, which may include steps such as getting a teacher mentor or going to education workshops, would be developed by administrators, the teacher, and the teacher’s union representative. The school district pays and provides resources for these plans. Either of these grades two years in a row will result in dismissal.

“The conversation is no longer about attracting and retaining [new teachers],” said Pesavento. “It’s about when are you [the state] going to stop pushing people out.”

When the teachers who stay retire, Pesavento says they are a part of “the best retirement system in the country. If every teacher in New York State was to retire tomorrow, they [New York State Teachers Retirement System] could fund it.”

When Pesavento was a substitute teacher he said he could have entered the system under a certain contract, called tiers, where he would not have had to put any of his salary in his retirement fund. However, he did not sign up until months later when a new tier had been adopted, under which he did have to contribute some of his salary costing him thousands of dollars over his career.

“I was surprised how important retirement plans are. 40 years later he is still talking about it,” said Nikki Frumpkin, a fourth-year Visual Arts Education major and Painting BFA.

There are several unions teachers may join, including the national union called the American Federation of Teachers (AFT) and New York State United Teachers, as well as unions at the district level.

Teachers pay 95 to 97 percent of union dues even without signing up, said Pesavento, so new teachers should sign up to reap the benefits. Unions negotiate contracts and benefits, represent teachers if charges are filed against them, and provide teachers with information about their rights and responsibilities.

“I thought it [the conference] was going to focus on what happens in the classrooms. I didn’t think the focus was going to be on money, but it’s good to know. No one has really talked to me about that before,” Frumpkin said.

Although unions can negotiate contracts, new teachers have the ability to negotiate when a district wants to hire them. However, after being hired there is no wiggle room.

For example, they may ask for a higher salary for experience they have beyond their Bachelor’s degree, such as for any graduate level courses or workshops, called “experience credits.”

“You’re entitled to ask these questions,” said Pesavento. “Are they required to give it to you? No. But you’re crazy if you don’t ask for it.”

Education students, who must get their Master’s degree within five years of beginning teaching, are also faced with the question of whether to pursue that degree sooner or later.

“I’m applying here [SUNY New Paltz] for graduate school, but also looking for a job. Whichever comes first,” said one student who graduated from the education program in December of 2011.

One school of thought, the director said, is that prospective teachers are more attractive applicants if they can be hired cheaper.

“I don’t know if I buy into that,” he said. “Most people want to buy quality and they are willing to pay for it.”

“I found that to be the most helpful because that’s what I’m doing now,” said Frumpkin. “I’m working on my resume.”

Pesavento also advises teachers to become familiar with the Common Core State Standards, educational and instructive technology such as Smart Boards, virtual learning, as well as outdoor education. However, technology does have a time and a place in the classroom, he said.

“The most important thing I’m going to tell you is to watch it with the Facebook and the texting and the e-mailing to parents and kids,” said Pesavento. “It seems innocent, seems trusting, but it can turn on you in a minute.”

For more information, visit the Mid-Hudson Teacher Center at SUNY New Paltz in the Old Main Building, Rooms B117 and B118.

May 10 – Close Reading – Strategies for Use in the Secondary Classroom

May 16 – Improving Teacher Effectiveness Through National Board Certification

May 17 – Evidence for the New Teacher Evaluation Process

Thu Apr 12 , 2012
If you have been keeping up with the Republican primaries this past election race, you know it has been a bumpy ride for the viewers, readers and listeners. It is not easy pickings for those who are on their way to the real jobless world of recession where every tax […] 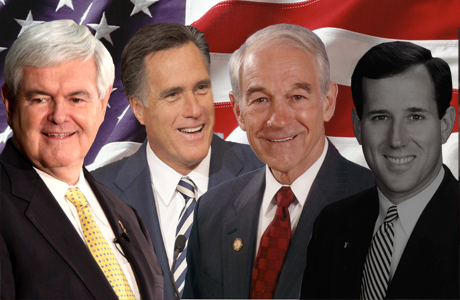