Lisa Phillips is a freelance writer for the New York Times, Boston Globe and several other media outlets. She has a four-year-old daughter; her husband is an artist and a museum consultant who works for contractors at various museums across the country. He also runs his own Web design business. Neither receives health benefits from their job, so Phillips had to turn to other alternatives.

A resident of Woodstock, NY she has been a journalism professor at SUNY New Paltz since Fall 2003, teaching introductory news writing and radio reporting classes. By teaching two classes, she is eligible for health benefits. She said the job’s health benefits have a lot of bearing on why she took it and why she continues to teach.

“I wouldn’t want this job if I didn’t really care about it, that’s an important thing to emphasize. I really like teaching. But getting benefits is a huge thing,” Phillips said. “When you’re a freelancer you have to pay out-of pocket for insurance, probably around $1,000 to $1,200 a month for decent benefits. Without this job, that would not be feasible right now.”

A record number of Americans are uninsured – around 47 million. Of this number, eight million are children. The cost of health care has risen four times faster than employee wages over the past six years.

Consequently, low-income families in the U.S. are often forced to make the tough choice between health coverage or housing, food and other basic needs. Many of these families rely on trips to hospital emergency rooms for regular doctor visits because they cannot afford health insurance or don’t receive benefits through their employers.

These figures are what placed health care reform near the top of both presidential candidates’ public policy platforms during the election. Now that Barack Obama is president, there is one big question: will he be able to implement effective reforms and if so, how soon will this occur? Some speculate that with the recent $700 billion bailout plan, important issues like health care will be put on the back burner.

Karen Lipson is the director of the Division of Policy in the Office of Health Systems Management for the New York State Department of Health. She said that while there won’t be a lot of surplus money to provide coverage for uninsured individuals, she thinks that the current state of the economy should make health care an even larger priority.

“Obama’s advisors seem to be saying that because of the economic situation we really need to address health care – they’re both intertwined,” Lipson said. “Businesses and individuals are being crushed because of the burdens of health care costs, so handling the health care crisis would have a good impact on the economy also. I don’t think they’re going to walk away from it.”

A pivotal part of Obama’s proposed health care plan is to expand the public sector of health care and potentially create a third public insurer to accompany the current ones, Medicaid and Medicare.

According to The Bureau of National Affairs, Inc. (BNA), expansion of Medicaid under Obama would cover more low-income people and cost an estimated $910.9 billion. The plan also included a mandate to purchase health insurance for children, which many Americans think is the key to making the cost of insurance affordable.

“The mandate would mean that healthy and sick people would be able to buy insurance. Many healthy people don’t think they need insurance and sick people with high medical expenses typically buy it to the extent they can afford it, but costs usually exceed the amount that insurance will cover,” Lipson said.

Lipson explained that Obama’s other idea to create a health insurance pool or bank, which would result in healthy and sick individuals paying the same amount for insurance, would be a driving force in lowering health care costs.

“It’s a good method to cross-subsidize health like this because costs go down for everyone but especially the sick who really need this break,” Lipson said.

“Improving the system by which insurers store, organize and manage health records will lead to better communication about and between providers, eliminating mistakes that doctors make such as faulty prescriptions or mixing drugs that leads to bad reactions in patients,” Lipson said.

Throughout the election, Phillips felt that Obama would be able to best address her needs regarding health care.

“I definitely felt that Obama was going to at least try to do his best to steer the country in a better direction for health care coverage,” she said. “It will be difficult for him, though.”

To implement reform, Obama’s main source of funding would be a tax on employers who do not currently offer health insurance, which would raise about $226 billion in new revenues, according to the BNA report.

Amanda Nagle, a student at SUNY New Paltz, is currently on her parents’ health plan. Upon her graduation this past December, she is without health insurance until she finds a job with benefits, making trips to the dentist for the tooth she cracked very expensive.

“These things like finding a stable job take time and if I need to see the doctor and I have no insurance it will be a big financial burden,” Nagle said. “I have medications that will be very costly once I’m kicked off my parents’ plan.”

Nagle is currently an intern at a company that she hopes to be working for full-time soon and would be guaranteed health insurance this way. If not, she plans to go without health insurance until she lands a job that offers it.

“If it comes down to it and situations arise that require me to buy health insurance myself, I will definitely need to make financial changes in my life, such as moving into a cheaper apartment or taking a second job,” Nagle said. “It would be a huge burden.”

Nagle sees affordable health care as a logical, basic need for all individuals and said that nobody should have to worry about getting sick or paying for necessary medications. She is hopeful that Obama will bring the reform the health care system needs and said all she can do is “wait and see if he can deliver his promise of change”.

Phillips explained that while she was pregnant, she was only teaching one class. At that time, the requirement to be a part-time employee eligible for health insurance was a minimum of two classes, so she took on another. There are 389 part-time faculty at SUNY New Paltz.

“I have the same choices as a full-time professor; something called the Empire plan which is probably the most popular plan because it’s really comprehensive. Co-pays are $18 and when I had my child, it was like 50 bucks,” Phillips said.

She noted that she receives a very low salary as a part-timer and that because she owns her own house it is crucial that she find a way to obtain insurance.

“If you own your house but don’t have health insurance, they can go after all your assets if you were to be in the hospital and can’t pay the bill,” Phillips said. “It would be very foolish to not have insurance. I do know some people who do it but I’m very conservative on those life basics. I don’t like to take chances and wing it.”

As with other countries, there are both private and public insurers in the U.S. health care system. What is unique about the U.S. system is the dominance of the private element over the public element. Many, however, still turn to the public element.

Medicare is a federal program that covers individuals aged 65 and over, as well as some disabled individuals. It is a single-payer program, which means the government is the only entity paying for the insurance and it is financed by federal income taxes.

The second public insurance plan, Medicaid, is a program designed for low-income individuals/families and the disabled. There are 51 different Medicaid programs throughout the nation, financed jointly by state and federal government taxes.

Lipson said that countries like Great Britain and Canada are dominated by socialized or government operated insurance programs similar to Medicaid and Medicare, systems that many people believe would be more efficient across the board because insurance companies would be cut out.

“In some ways these programs work better because they save money. They don’t have to advertise on television, executives don’t get paid as much as private companies and tax dollars would be spend more efficiently on government operated programs instead of on premium insurance companies,” Lipson said.

According to Lipson, studies show that the rates of heart disease, low birth weight babies and cancer mortality are far higher in the U.S. than they are in countries that have socialized medicine.

“This is alarming but nobody really knows exactly what the answer is. No situation is perfect,” Lipson said.

Lipson said there is not one single barrier preventing effective health care reform, but one problem is the reluctance of Americans to make sacrifices in the context of health care and their options.

“People don’t like insurance mandates because they don’t want to give up their choice to be uninsured. They don’t like health care reform proposals that quote ration care which restricts access and choices in care because this would take away their ability to get whatever type of care they wanted, when they wanted,” Lipson said. “The American people are afraid of anything different, anything changing, even though health care reform was one of the top two public policy issues most important to them in election exit polls.”

Thu Mar 19 , 2009
In August 2008, the Harold Independent School District in northern Texas announced that it was considering allowing certain teachers to carry concealed weapons during school hours. The small school with a little more than 100 students said it was to prevent violence, although they have never had an incident. The […] 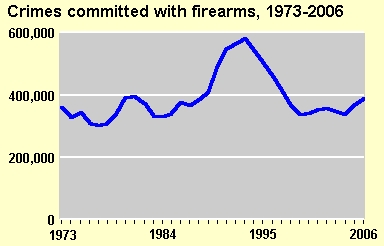