“Am I going to roll?” Eric Hill, 57, asks himself out loud every time he parks his truck on a slant. It’s a stick-shift, and he has no emergency brake.

After he rocks back and forth in his seat to make sure it’s secure, he sometimes puts a piece of cinder block behind his tire. He’s especially cautious in the parking lot of the Poughkeepsie Tennis Club – the location of his first and only car accident. It’s where his landlord works as a general manager, and where he goes to pay his rent.

A couple hours ago, Hill picked up his weekly paycheck at ShopRite. He works there part-time as a maintenance man – taking out garbage, sweeping floors, dealing with the bottle-recycling machines. He works there for 25 hours a week, making $8.25 an hour. That’s a little over $200 a week before taxes.

It will all be gone by the end of the day.

“I don’t mind struggling,” said Hill. “It keeps you young. I figure when the country breaks down and people have to fend for themselves, I’ll be better off than most.”

Before paying his rent, Hill had to trek to the Central Hudson Gas and Electric Co. headquarters to pay his electric bill, but he couldn’t pay in cash. He tried paying it at Hannafords, but they don’t handle overdue payments. Only after going to Price Chopper and paying $141.79 is he relieved of the burden. But the bills aren’t the only thing on his mind.

While he was in the parking lot at ShopRite, he ran into a manager for his other job as a part-time taxi driver at Joey’s Taxi Co. She told Hill that he might be let go. There’s a new rule in the company demanding every shift be a 12-hour shift. Hill can’t do that and work at ShopRite at the same time. He can’t live off only one job.

It wasn’t always like this. From 2003 to 2004, he was making $50,000 a year. He worked at another cab company and he had his own home-repair business called “Hill’s Handy Service.” Hill quit that cab job after the owners treated a manager badly. She was a friend of Hill’s who went out of her way to give him more shifts.

“I have this thing about loyalty and stuff,” said Hill. “She’s good people.”

Hill’s Handy Service hasn’t seen a job in over a year and a half. Hill chalks this up to people not having extra money to put towards extraneous home repair projects. He’s not surprised by this. As a cab driver, he could directly see the effects of the recession.

He’d pick up middle class people – people with jobs and nice clothes – and drop them off at their trailer-park homes.

Thankfully, Hill still does. He lives in a trailer on the border between New Paltz and Gardiner. The trailer is a wreck. There’s no hot water, and no working stove. But there’s an upside to this. Hill’s landlord can’t afford to repair it, and the only person willing to live in it is Hill, along with his two cats: Mr. Buttons and some stray that’s been coming around for years in search of food.

When he walks into the Poughkeepsie Tennis Club, he punches in the lock number which he’s memorized. He bends his knees up the stairs, but stops short of the door leading to his landlord’s perch above the courts. He points to the wall. “I did that,” says Hill. His landlord got him a job painting the stairwell wall. It’s decent work – the lines are straight, and the colors are fittingly muted and bland. Hill reaches into his pocket and takes out a money clip that pinches together only a few folded over bills. Beneath the fwump fwump fwump of someone running on a treadmill, he measures out exactly $75. His hands shake when he deals with the flimsy bills. Maybe it’s the age. Maybe it’s the eye problems, or the back and neck problems. Maybe it’s the remnants of a heroin addiction he had to shake when he was 20. He puts the rest of his money back in his pocket and goes through the door.

Hill’s landlord is sitting in a glass box, watching over the tennis courts on the lower level. When he spots Hill, he opens the glass door. Hill hands over the cash.

His landlord is agreeable, but unsmiling.

The rent is actually $550 a month. But when Eric quit his job, he had trouble finding a new one. He talked his landlord into lowering the rent to $300 a month, which he pays in weekly installments. It’s better than his neighbor, who rents from the same landlord.

“I’m kicking him out,” the landlord says. “He’s not making rent.”

After rent, there’s one more stop, one more bill to pay. “I’ve got this weird addiction to heat,” says Eric. “I get the shakes when I don’t get my fix, you know?”

He drives back into New Paltz, and stops at the Bus Stop Café – across the street from the Citgo where he’ll get his kerosene. He walks in and says hi to the Liptons, a married couple of former journalists who own the café on the side to offset their income. Hill orders himself

a grilled cheese, which the Liptons cut specially for Hill into four pieces.

“They’re good people,” Hill says. “When I’m low on money, they let me run up a tab here,and I’ll square even at the end of the week.”

Outside, it starts to snow. He looks out the window of the café, towards the gas station where he’ll soon pay $30.01 for two canisters of kerosene. Hill says that will keep him warm until Sunday. It’s Friday.

He looks over his electric bill – the one that says “final termination notice.” The Liptons let him use their phone to confirm payment. After that unnecessarily arduous task is over, Hill finishes his grilled cheese. The next electric bill comes in a week.

A look at Grant+Noren designs, struggling against the backdrop of an economic recession. Sandra Hamlett reports.

Quiet for a Cause

Thu Apr 21 , 2011
On Friday, April 15, a group of New Paltz students participated in Day of Silence, a protest in which those involved took a vow of silence to spread awareness about harassment and bullying in the LGBTQ community.  The protest took place in the Soujourner Truth Library lobby. Protesters held signs inviting […] 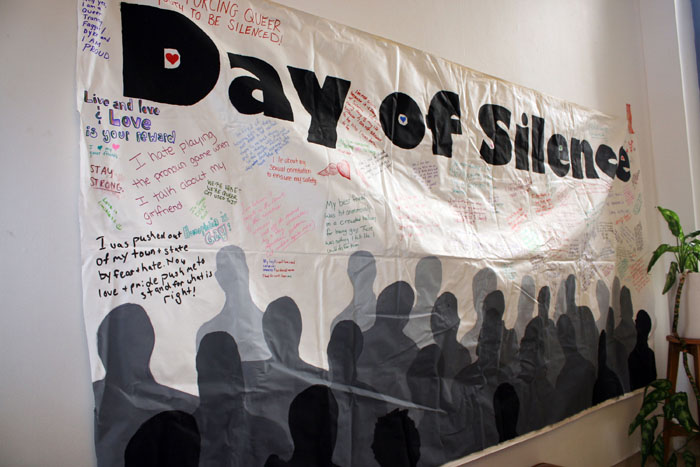