The Inauguration of President Donald Christian on PhotoPeach

The Inauguration of President Donald Christian on PhotoPeach

Photo 1- The SUNY New Paltz Presidential Mace and Chain are positioned on stage prior to the inauguration.

Photo 3- President Donald Christian and Simin Mozayeni, Presiding Officer of Faculty, embrace after hearing her heartfelt words about President Christian and the true ability she believes he has to be an amazing president of SUNY New Paltz.

Photo 6- Dr. Tom Meyer (Associate Professor of Secondary Education & Member of the Presidential Search Committee) introduces the newly inaugurated President Donald Christian as he prepares to give his presidential speech.

Photo 8- President Christian recites his presidential speech while board members, trustees, alumni, and faculty look on at his sides

Photo 9- The Studley Theater audience gives a standing ovation to President Christian after his thoughtful and encouraging speech.

Photo 10- President Christian smiles up to the audience filled with friends, family, students, faculty, staff, and many more after presenting his inaugural speech.

Thu Apr 26 , 2012
Since it opened its doors (and walls) in 1994, The Inner Wall rock climbing gym has seen countless routes taped to its walls, hundreds of chalked hands and ropes in every color. What it’s had a shortage of is climbing competitions. Owners Glen and Chris McBride, also a father and […] 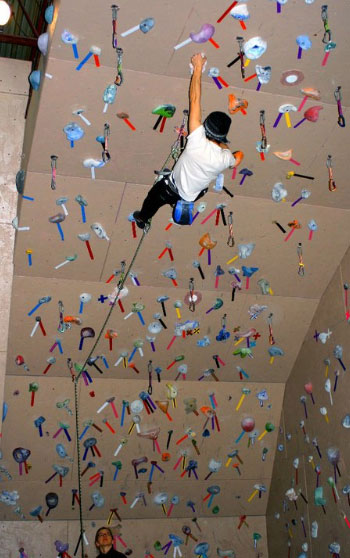