Tall snow banks surround the roadside stand at Dressel Farms, on Route 208 in New Paltz.  It’s the middle of winter, and the usual fall flock of customers are shopping in the warmth and comfort of a supermarket, where the prices are low and temperatures are high.

Their patrons are elsewhere, but the work never stops on the farm.  Some of the hardest work is the preparation put into the next growing season.

In winter, the vacant store and colorless, outstretched fields are in stark contrast to the scene in September, just a few months earlier.  Then, the trees were alive with vibrant red apples and full of leaves, and the small parking lot in front of the stand was filled with customers’ cars, forcing some to park on the street.

During January, however, the same store is devoid of movement.  The cash register mostly remains closed, even though the shelves are still packed with fruits and vegetables.  The only car in the parking lot is using it for a u-turn.

Dressel Farms is a large operation, selling its apples for fresh markets in not only the United States, but Canada and overseas as well, with 90 percent of its business happening off the farm.

“Maintaining a farm this size is a year-round job,” said Tim Dressel, grandson of the owners of the farm, Rod and Deb Dressel.  “Winter months mean covering the strawberries’ beds, pruning the trees and packing the crop just picked.” Farming is not as simple as planting in the spring and harvesting in the fall.  With new advances in technology and keeping fruit fresher longer, the game has changed.

“We’re currently packing all the fruit we stockpiled in the fall,” said Dressel.

In fact, they pick more apples on the 300-acre farm than they can pack and sell.

“We generally finish up packing the last of the apples around the beginning of June the year after we pick,” says Dressel.

Dressel Farms has been a family owned business for generations, since it was acquired in the 1960s, making for an interesting management dynamic.

“As you can imagine, my grandfather is the traditional one.  My dad realizes the importance of technology and the ever-advancing industry, but is not always the first to embrace new things,” Dressel said.  “On the other hand, I grew up in the 1990s and 2000s, so I’m constantly looking for ways to use technology to make our lives easier.”

This winter, Dressel Farms has upgraded.

“We have a new, state-of-the-art storage building,” said Dressel.  “It contains rooms that are monitored by computers to the hundredth of a percent for oxygen and carbon dioxide content and I can adjust the desired levels in each room from any computer in the world.” Equipment hasn’t been the only change.  The farm’s owners are currently trudging through another modern invention: paperwork.

“It’s also a time we use to spend doing the massive amounts of paperwork that now go along with commercial farming,” said Dressel.  “Everything from permits, licenses, certifications, you name it and we have to fill it out.”

And, of course, there’s always competition.

“In 2009, Washington had a “light” crop – only 128 million bushel while New York had its best year in a decade producing just under 33 million bushel. As soon as Washington apples hit the east coast, prices plummet and there’s really nothing we can do about it,” said Dressel.

Dressel is facing an all-too-common battle: struggling to maintain tradition or being left behind.  For now though, Dressel’s roadside stand won’t be going anywhere.

Thu Mar 31 , 2011
The weather-worn guardrail with the graffiti, “I will love to the end BMS + KLS 12-21-09” is the only barrier between you and the freefall on the overlook on Route 44/55, outside of New Paltz.  Brushes of white cover the land that once was filled with the oranges, yellows and reds of fall.  A […] 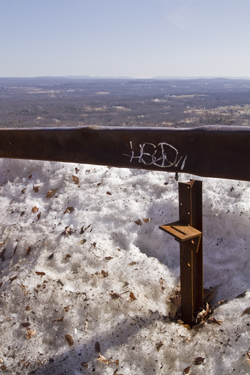