Girls giggle, smirk and scribble notes on pieces of paper. Notes that other girls know are about them. Eyes wander around the room as minds wonder what that little piece of paper says about them. At first glance, it seems like a scenario that could be happening in any junior high school across the United States, but when one looks a little closer, it’s not what it seems. The notes don’t hold taunts, but positive perceptions of each individual observed by others, such as “beautiful smile” or “great hair.”

The event is called “Loving You: A Body Image Workshop.” This is just one of the programs hosted by Avant Garde Magazine, a monthly women’s magazine at SUNY New Paltz.

Michelle Feliciano, a fourth-year at SUNY New Paltz, launched the magazine in the spring. Although Avant Garde is a relatively new publication on campus, Feliciano is devoted to making the magazine a success, promoting a positive definition of beauty concentrating on diversity while trying to balance it all.

The idea to start the magazine came to Feliciano as she sat in a media ethics class taught by Professor Howard Good. Good asked the class what each of them wanted to change in the world.

“It got me thinking,” Feliciano said. “Words can be empowering.”

Feliciano, a journalism major, already had writing and editing skills. She knows the ins and outs of programs like Adobe Photoshop and Indesign. She also feels there is a need for a women’s magazine on campus because the majority of the student body is female, she said.

“I knew I had the tools and that it was something I wanted to do,” Feliciano said. “It was a now or never feeling for me.” In the 15th century, the term “avant garde” referred to the front part of an army, and six centuries later the term hasn’t changed very much. In the music, art and fashion world it means to be ahead of your time—the perfect name for the magazine which would cover everything from outfit ideas to inspiring poetry, said Feliciano.

Picking the name was just the beginning. Feliciano recruited a staff of editors, photographers and public relations personnel. She made Avant Garde magazine a club so they could get funding from the Student Association that would vary by semester, she said.

Before the launch of the first issue Feliciano spent 24 to 36 hours per week just doing design, she said.

When the first issue went to press in March, it was a hectic time. For great ideas and collaborations, Feliciano relied upon her small, but enriching staff. She has faith in the power of group work and believes that great things can come from working together.

“I love to see an idea that I have come to life because of what my staff contributes to it,” Feliciano said. “It gets the message across in a bigger way.”

According to Feliciano, she has received positive feedback about the magazine, like her readers having an improved sense of worth about their bodies after reading an article, or just a simple comment that somebody really liked a photo.

“I feel like we definitely created a buzz,” Feliciano said. “It makes me want to do more. There is always room for improvement.”

Being editor-in-chief has definitely inspired Feliciano in many ways. She declared a Women’s Studies minor and is taking four classes this semester so she can devote lots of time to the magazine, she said.

Still, between her two jobs as a Resident Advisor and a bookstore employee, as well as her role as a full time student, Feliciano gets overwhelmed at times, she said. She finds it helpful to write lists, draw out her schedule and carry her planner with her at all times.

“I even write down the little things, like to take a shower or to grab something to eat,” Feliciano said.

Feliciano hopes to work for a women’s magazine one day, but she wants it to be different than a lot of the women’s magazines that are out there now. Photoshop and photo retouching of advertising puts pressure on girls to look a certain way, she said.

“I feel like a lot of women’s magazines preach one thing, and then their ads send an opposing message to the readers,” Feliciano said “Often magazines say to love yourself and your body, but then their ads don’t match up to what most women look like.”

This semester, Avant Garde is going to host monthly programs as it did last semester to encourage positive body image. They plan to host a launch party at the end of September.

“I just want to help people who maybe feel like they can’t relate to what is already out there,” said Feliciano. “Whether it’s a photo or an article they relate to it motivates me to do more.”

Thu Oct 20 , 2011
A famously art-driven town, New Paltz N.Y., hosted the fifth-annual Celebration of the Arts(COTA), a free festival for all local artists on Oct. 8. All forms of art and creativity were encouraged and welcomed with open arms. Painters and sketch artist positioned themselves along cobblestone paths documenting the beauty of […] 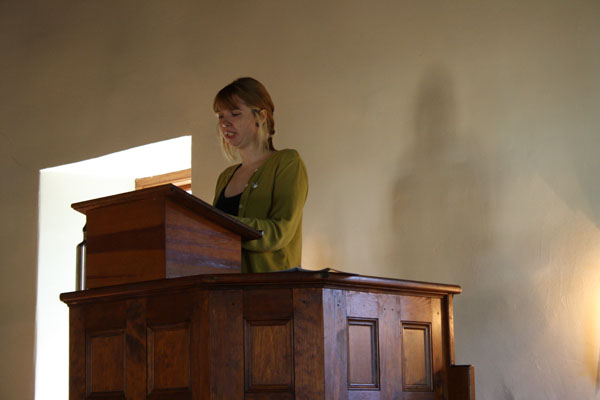