Avant-Garde Magazine is breaking ground as a new women’s magazine and website that contradicts the mainstream media’s portrayal of women.

Much like the Operation Beautiful movement created by blogger Caitlin Boyle that has gone viral, Avant-Garde magazine promotes positive body image and self-worth in its pages and special events on the SUNY New Paltz campus.

Unrelated to Operation Beautiful, Avant-Garde Magazine echoes the primary message that “you are beautiful,” featuring content that celebrates different body shapes and sizes.

The first issue was released on February 14, 2011.  The second issue had 200 copies published in the third week of March, an increase from the first issue print run of 150 copies.

Michelle Marie Feliciano, fourth-year journalism major and women’s studies minor, put her vision for the magazine into action last fall semester.  Feliciano applied what she learned from her journalism classes, such as Media Ethics and Copy Editing and Layout, to make her vision a reality.

Avant-Garde’s 10 staff members were recruited through Feliciano’s Facebook page. Some staff members have experience from working on high school newspapers.  Feliciano uses her journalism skills to teach them the basics of working on a publication.

Stephanie Brynes, a second-year double major in French and English, is the web editor for Avant-Garde and, alongside
Feliciano, is also the co-editor.

Brynes worked at a graphic design agency, editing two different publications during winter break, and she has experience with the popular WordPress blogging site as well.

“My mom owns the graphic design agency, and my dad is the editor of a local newspaper,” said Brynes. “So, I’ve kind of grown up in this atmosphere as well.”

The magazine is filled with fashion trends and suggestions for students both on and off campus. There is also a monthly challenge where readers have a chance to win their own personal photo shoot for the next issue.

The staff of Avant-Garde prides itself on being diverse in the models they choose and the content they cover.  Feliciano felt it was hypocritical for a mainstream magazine to have articles that promote individuality and then have content that doesn’t support it. The magazine also included a men’s column written by Kevin Mercado, allowing for a male’s point of view.

Mercado works on the magazine as one of the two reporters on staff. In addition to taking photos, he edits video, does layout and writes for different sections of the publication.  Mercado hasn’t had any professional photography experience, but he has taken video production classes on campus, he says.

Determined to meet the first deadline, Feliciano spent hours collaborating with the staff during the weeks leading up to first publication, sometimes working until 2 a.m. to get the job done.

“It takes a lot of time to actually think about layouts and design the actual magazine,” said Mercado. “No matter how many times we edit an article, it’s always worth checking one more time.”

The other role of Avant-Garde is to host monthly events to reinforce its message and give students opportunities to interact. Avant-Garde’s next event is called “Loving You: A Body Image Workshop” on March 29 at 9 p.m. in Student Union Room 100.  Avant-Garde will also premiere a video featuring its staff that night.

Feliciano is confident that Avant-Garde will continue publication and the events after she graduates in December thanks to the dedicated staff.

“If the staff was just working for me this never would have worked out,” she said.

Reel Noteworthy: Go With It

Thu Mar 17 , 2011
I called it. Natalie Portman. Christian Bale. “The King’s Speech“. The King himself, Colin Firth. Heck, I even listed Tom Hooper as my sentimental favorite to win Best Director. My point is, with the glaring exception of Best Supporting Actress, my Oscar predictions in last week’s column were spot on. So, it’s time now […] 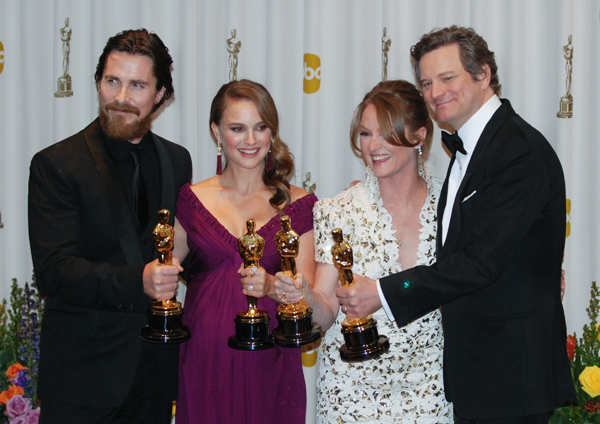