Ancient ceramics, projectile points and human remains: an archaeologist’s dream. Students involved in SUNY New Paltz’s field school get to experience this and much more.

Though the field is primarily of interest to those in the anthropology department, SUNY New Paltz students of different academic backgrounds have become involved in the highly respected archaeological field school, excavating historic Huguenot Street. Professor Joe Diamond, head of the summer program, was recently honored as the featured speaker for historic Huguenot Street’s Second Saturday talk on April 10.

Diamond began the field school in 1998 after he conducted two excavations and found a series of pre-historic pottery fragments. Due to the site’s convenient location just outside of campus, he realized the opportunity this would be for students and professors alike, regardless of academic focus.

“It’s a great opportunity for [those involved] to learn more about the history right where [they] are living,” Diamond said.

No experience is required but those looking to get involved must be available for about a month during the summer and take part in one of two sessions. Excavation starts at 6:30 a.m. and doesn’t end until 2 p.m. On days that it is raining, work will take place in labs on campus.

The 2009 group was joined by Terrah Bretherton, a fifth-year anthropology and visual arts double major, who supplied her co-workers with Fla-Vor-Ice from her nearby apartment on scorching hot summer days. For Bretherton, it wasn’t the weather or the hours that concerned her.

“It was more so the spiders,” Bretherton said, claiming ending the day dirty, sweaty and exhausted makes the students feel satisfied.

Bretherton was a part of discovering the largest piece of Magellica found at the site in the summer of 2009. As soon as the artifact surfaced, she “started to dig the rest out with [her] bare hands, while everyone gathered around.”

Bretherton was also involved in the excavation of a large pot with carbonized food remains found inside.

Huguenot Street is the oldest known archaeological site of European settlers. The Huguenots settled in this area of the Hudson Valley in the 1600s, fleeing religious persecution. In addition to the European artifacts such as ceramics, beads, glass, metal and nails, recent findings have allowed Diamond to make the claim that Native Americans have also inhabited this land at some point. These findings include projectile points, crafted utensils used for weapons and everyday tools and pottery made of stone.

Diamond’s proteges have recently discovered a stockade with the frame of a house inside of it, in addition to three structural remains that have not yet been unearthed.

“They most likely date back to around 1677,” Diamond said.

Shedding Light on a Cause

Sat Apr 17 , 2010
Since 2003, Invisible Children, a non-profit organization based in California, has been raising awareness about human rights violations in Uganda. New Paltz students have done their part in supporting this group since 2008 when they started their own branch of Invisible Children on the college campus. 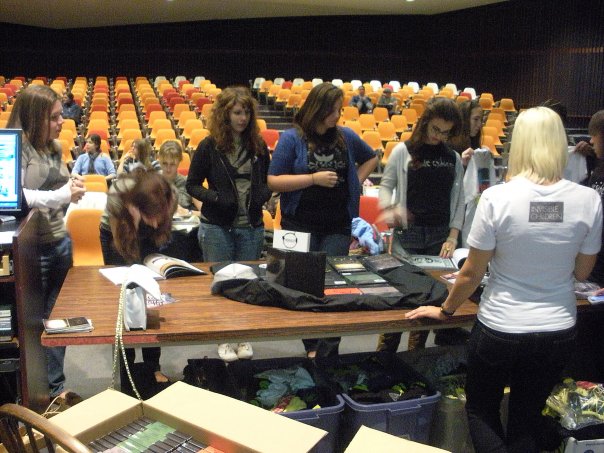