Police said they have been able to gain compliance with subjects quickly and efficiently with new technology of non-lethal weapons such as a Taser. When subjects are acting violent or running away, police officers look for these devices to contain and control the situation.

While police say Tasers have given them a reliable, non-lethal weapon to use to subdue suspects, critics say there’s potential for overuse and that these devices make it easier for officers to fire on a subject.

On June 19, 2011, a police officer was chasing Aaron Kravig to make an arrest, according to a New Paltz Police report. The student, who was said in the report to be under the influence of drugs or alcohol, ran past the officer and ignored his verbal warning and continued to flee. The officer then deployed his Taser and gained compliance where the student was then taken into custody. (See attached document for full case narrative)

Joseph Snyder, chief of police for the town of New Paltz, said it is important for the department to issue Tasers because when deployed, the Taser locks up an individual’s muscles so they cannot resist and allows officers to handcuff the individual.

The New Paltz Police prefer the Taser, also known as a stun gun, as opposed to other non-lethal weapons like pepper spray. Snyder explained that pepper spray does not always stop the subject, sometimes does not set in to burn and takes time to settle in.

“We like to look at any tool or device that [is] less lethal that could take subjects in custody,” Snyder said. “When you talk about force, the Taser is the better option when circumstances allow.”

Eight months after the Kravig incident,  University Police responded to an incident where they used a Taser.

Last February, a student holding a large metal sword was threatening physical harm to other persons, according to the police report.  The student continued to be uncooperative when the police arrived and was wrestled to the ground.

The student then struck the officer and refused to comply with multiple verbal warnings, the police report continued. An officer then deployed his Taser, which was ineffective due to a “clothing disconnect,” where the prongs did not make contact with his skin.

The subject continued to fight and another officer deployed his Taser, which resulted in the subject falling to the ground, the report continued. After the officer used a variety of restraint and control techniques, the student was finally taken into custody.

“Three of the officers received some minor bumps and bruises but were all back to work at their next shift,” University Police Chief David Dugatkin said.

Both of these police reports were obtained under the Freedom of Information Law.

The New Paltz Police Department currently owns two stun-guns and has been issuing them since 2009. These officers are required to go through mandatory training for non-lethal weapons. The chief of police said any officer that carries the Taser is certified and trained.  The initial training is a two day course, totaling 16 hours.  If the New Paltz police station puts more members in service with them, the department would offer continued training as well, Snyder added.

Before adopting the stun-guns, the police commission hosted an open forum to solicit public input and demonstrate Taser use by using the stun-gun on a lieutenant. The public was concerned that the stun gun would be abused by law enforcement and the health of the individual may be at risk when shocked.

Kravig, the SUNY student from the 2011 incident, feels the officer who stunned him last June used unnecessary force and could have caught up with him and tackled him. He told The Little Rebellion that he believes that Tasers are not necessary in any situation and an officer can always use other techniques. Kravig was stunned in the back and explained that he was in bed for three days.

“My whole body was sore and weak,” Kravig explained. “I couldn’t get out of bed, move or do anything. I felt like I was sick without having a cold or fever,” he said.

Snyder took a shock from a Taser during a training presentation sponsored by Taser International. He says officers are not required to be stunned but some like to know what it feels like in terms of immobilizing a subject.

His experience being shocked differed from Kravig’s.

“It was an interesting experience and it definitely hurt,” Snyder said. “I would rather be tased than pepper sprayed. It is a five second ride and when you are done you can start doing push-ups.”

The New Paltz Police issued a formal policy addressing the use non-lethal weapons which included the Taser. The officer is required to give a verbal warning where he or she says “Taser, Taser, Taser” so other officers and subjects are aware before deployment.  The policy also notes that small people, children, individuals with diseased heart, elderly, pregnant women, frail/infirm people and individuals with neuromuscular illness are not prohibited from being stunned but are recognized as an “elevated risk.”

“[We] try to avoid the chest area,” Snyder said. “The ideal location is the back but if you have someone who is attacking you, you can tase the front but try not to hit the face.”

Across the Mid-Hudson Bridge, in the town of Poughkeepsie, Chief of Police Thomas Mauro shares similar thoughts on the Tasers. Mauro said the Taser provides an officer with a stand-off option.

“You must use force in self-defense, use force to defend someone and must meet force with reasonable force,” Mauro said. “The Tasers protect you from using lethal force.”

Behind The Artist: Andrew Kaminski

Thu May 3 , 2012
Andrew Kaminski is a fourth-year art major. On April 27 Kaminski presented his work in the Bachelor of Fine Arts Thesis Exhibit. The pictures included cover this event. Kaminiski talks about his life and art in a unique coverage showing both the art and artist behind the process. 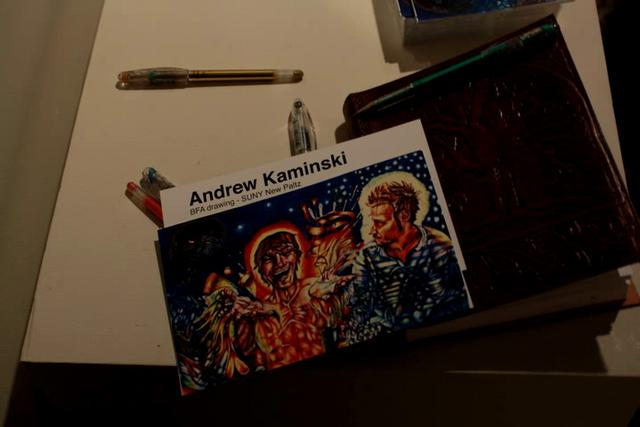