On a sunny Friday afternoon amid the yellow stream of taxis and the rushed pace of pedestrians, are stands and tents filled with vegetables, fruits and cheeses. Here, in the bustle of New York City among rising stone edifices, a small group of local farmers have brought their goods. The Union Square Greenmarket, managed by the Council on the Environment for New York City (CENYC), is one of the city’s busiest and most popular farmers’ markets.

I delve in. Baby Japanese eggplants in waxy whites, purples and greens, some red tomatoes, baby bok choy and a bit of tatsoi for that stir fry I have been meaning to cook up. The Union Square Greenmarket is truly a haven for foodies, produce lovers and kitchen fanatics. As I walk around I notice that many of the farmers arrive from the Hudson Valley, a region that has been put on the map for its abundance of and commitment to local farming and agriculture.

Such is the general consensus of our more and more green-focused region. According to a report released by Glynwood, an organization whose mission is “to help communities in the Northeast save farming,” 17.35 percent of Hudson Valley’s total land mass is devoted to farming. Of the ten counties represented in the report, eight reported an increase in farmland between 1997 and 2002, adding 16,500 acres of farmland to the region. The Hudson Valley is home to 3,988 farms, all of which have a significant part in shaping the food culture of local towns and cities like New York.

But what is at the root of this phenomenon? People are beginning to care about the story behind their food – where it comes from and how it’s grown.

“You are helping the people around you when you shop local,” Kara Eletto said, an art student at SUNY New Paltz who frequently shops at Robin’s, a local food market. “You are paying less and getting better quality produce.”

Recent SUNY New Paltz graduate Chrissy Corrigan believes that local farming can benefit any region – not only the Hudson Valley.

“Local farming will always benefit any area, because people are starting to care more about their food and where it comes from,” Corrigan said. “It’s a significant draw to anywhere.”

A simple walk around New Paltz can show the importance of quality ingredients. Many restaurants and shops value and advertise the use of food grown in their backyard. Davis said his restaurant is “dedicated to compassionate food made from organic ingredients,” although not all of his ingredients are local. Other establishments like The Cheese Plate sell a number of local cheeses, and many of the town’s restaurants, including Gomen Kudasai and the Village Tearoom Restaurant & Bake Shop, frequently use local produce and all natural ingredients.

“[We sell local] to help the community, to help the local farms be able to operate and to help outrcustomers learn that there are a lot of good local cheeses they have access to,” said Amanda Erickson of The Cheese Plate, located in New Paltz’s Water Street Market.

The small shop sells a variety of cheeses from around the world but also carries a number of cheeses from local towns such as Cooperstown, Warrensburg and Poughkeepsie. Erickson feels that selling local goods has positively affected the culture of food that New Paltz is home to.

“Since I’ve moved to New Paltz, I appreciate having locally grown vegetables and cheeses,” Erickson. said. “It definitely is a part of New Paltz at this point.”

Erickson said that local goods also stimulate the economy. She said tourists periodically come by the shop to ask for local cheeses, and that this has a positive effect for the community.

Yet local produce and cheeses are only part of the picture. Production and refinement of food also shapes local food culture when it is done locally. Mudd Puddle Coffee Roasters and Café roasts all of its coffee in-shop. Although coffee is grown in the tropics, having it locally roasted offers many environmental benefits.

“We’re cutting the delivery and cutting out the middleman,” said Michelle Walsh of Mudd Puddle. “It’s more fresh than if we were to get it from a company – we get it straight from the ship.” New Paltz, being a small town, certainly has a variety of cuisines and food stores that can be unexpected. Many of these establishments owe the richness of their success to the local farming in the area. When food has typically traveled 1,500 miles to reach your kitchen cabinet, it can be somewhat relieving to know that the Hudson Valley provides an array of foods grown nearby. Greenmarkets like the one in Union Square which showcase the valley’s fresh goods are aimed at cutting the miles between farm and plate – an important idea in an industrialized world. In order to keep the farms running, the farmers will have to think of innovative markets in which to sell their food. Local governments will also have to be proactive in their support of farms and consumers will need to continue to educate themselves about the importance of local farming. Enriching oneself in the diverse food culture found here isthe perfect place to start.

“The ‘food culture’ and the culture in general are definitely impacted,”Corrigan said of local farming in New Paltz. “It offers another source of community – knowing a farmer, having community-supported agriculture, the experience of going to a farm market – it all helps to build a solid foundation that’s invaluable to any town.”

Thu Oct 29 , 2009
The improvisational music of Miles Davis reverberates off the walls in the college dorm room of Vince Tampio and Mike Kadnar. These two SUNY New Paltz music students make up half of the jazz band Quatrane. Jazz flows emotionally through the instruments of these musicians and transforms into notes for […] 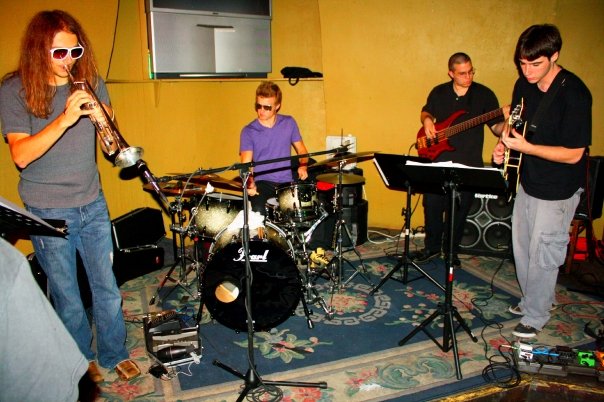