With a decision on New York State’s allowance of hydraulic fracturing set to be made in the coming months, the SUNY New Paltz community is making its voice heard.

On Nov. 1, New York Public Interest Research Group (NYPIRG) hosted a screening of filmmaker Josh Fox’s “The Sky Is Pink,” and hosted a panel discussion afterwards to talk about the negative effects fracking would have in New York.

Fox, the filmmaker behind 2010 Oscar-nominee “Gasland”, looked at the possibilities of what could happen to New York State if Gov. Andrew Cuomo were to allow drilling in the Southern Tier.

According to Fox’s documentary, drilling in one designated area alone could damage the entire state’s weather supply and well safety. He said in his film that even if fracking were to be kept in one area, the damages would spread farther than they were originally supposed to.

“Just like how there are no safe cigarettes, there is no safe fracking,” Fox said.

Konigsberg began his discussion by talking about the potential damage hydrofracking in New York could be to the state’s water supply. Konigsberg said with the process of fracking, the drilling could lead to cracks in shale that would allow unwanted toxins into the water supply, making the water unsuitable for consumption.

He also said that currently, we as a society don’t understand the geology behind hydrofracking, and this lack of knowledge could be costly in light of recent events.

“If you look at the extent of the shale deposits in New York State, it comes close to being as bad as Superstorm Sandy was,” Konigsberg said. “It’s trying to tell us something.”

Ruotolo discussed a trip he, professors and other students at SUNY New Paltz took to Dimick, P.A. last spring. Dimick is one of the areas in Pennsylvania that currently allows hydrofracking in the state.

Ruotolo told those in attendance that while the group was there, they saw a split between pro-fracking groups and those who opposed them.

“For me, the biggest surprise on the trip was not the environmental destruction or loss of habitat or contamination of groundwater, but how it divides communities very deeply.” Ruotolo said. “Dimick is the heart of frackland, and you see the people who are thankful to the gas companies, and the people who are stigmatized for saying their water has been contaminated by the practice.”

While both Ruotolo and Konigsberg honed in on the environmental and social impacts hydrofracking has brought and can bring in the future, Lipson discussed the political and economic aspects of hydrofracking. He said from an economics perspective, it’s the wrong investment to make.

“The argument that a lot of people make is that investing in hydrofracking is an investment in unhealthy fossil fuels,” Lipson said. “What is being argued right now is that instead of investing in cheap energy, we need to invest in longer-lasting sustainable energy.”

Sun Nov 18 , 2012
Past the shops and eateries of New Paltz, Main Street winds down to a small truss bridge that carries Route 299 over the Wallkill River.  The structure serves as a scenic connection between the lively town and the golden fields that roll toward the Shawangunk Ridge. The overpass, originally constructed as […] 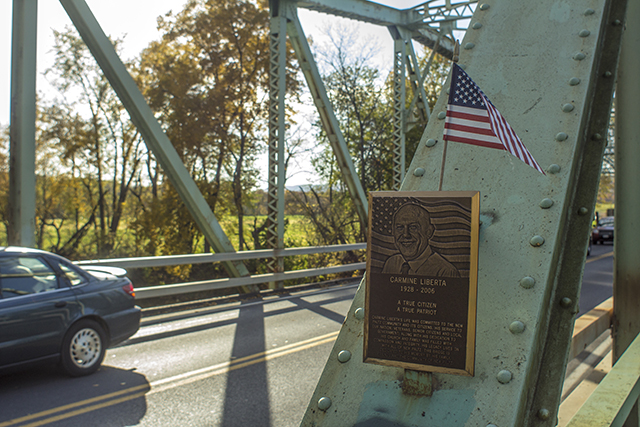