Brittany LaChausse is looking at more than $45,000 in student loans when she graduates in Spring 2010. Instead of graduating with bright economic prospects, the SUNY New Paltz student from Beaver Falls, N.Y. will be looking at a Cadillac Escalade-sized debt, with no idea how long she will have to make payments.

LaChausse, a metals major, transferred to SUNY New Paltz in 2007 due to the $30,000 per semester that it cost to attend Pratt at Munson Williams Proctor Institute School of Art in Utica, N.Y. where she majored in fine arts. She works two jobs to cover living expenses and put herself through college.

“I think college costs way too much money. The cost of tuition is almost always not proportionate to the salary of the job you are going to get once you graduate,” said LaChausse.

Rising tuition and scarce job opportunities in today’s economy are leaving many students perplexed about extensive loans and economic prospects. With the increase of college tuition, a weakening economy and diminished state and federal funding, many four-year students must seek out federal and private loans on top of financial aid awards in order to pay for school; leaving them in heavy debt after graduation.

People are waiting to see what President Barack Obama will do to make college more affordable and strengthen America’s educational system once he takes office.

“My plan calls for giving every child a world-class education from the day they’re born until the day they graduate from college,” Obama said in his speech on education in Ohio in September 2008. “It’s also a plan that will finally put a college degree within reach for anyone who wants one by providing a $4,000 tax credit to any middle-class student who’s willing to serve their community or their country.”

Within the past year the cost of tuition and fees for a four-year public school (for an in-state student) rose 6.4 percent, while the same costs of a four-year, non-profit private school increased by 5.9 percent, according to College Board’s 2008 Trends in College Pricing. This is mostly due to families’ linking high tuition costs to a better quality education, that the most expensive school is the best for their child. This illusion causes schools to raise tuition to appear more prestigious, which marketers call the “Chivas Regal” effect.

The most expensive private four-year university in the world is George Washington University in Washington D.C. As of 2008, their tuition costs $40,392, a 3 percent increase from the previous year. This will stay fixed for five years for the freshman class, according to their Web site. Combine that with $6,520 for the least expensive room and board and you get $46,912 (without dining expenses).

Because of the current economic downturn that has left some struggling already, a number of students may stray from their dream schools.

“There’s been a lot of talk about the economy’s effects on families,” said Eric Gullickson, director of media relations at SUNY New Paltz. “You may see a trend toward families choosing a SUNY, like the one in New Paltz, over a private school they would have originally chosen.”

While the average public four-year school costs $6,585, all SUNY’s tuition will be $4,660 per year, according to the SUNY Web site. With a $310 increase issued for the Spring semester of 2009, tuition and fees including room and board for the 2009-2010 year at SUNY New Paltz will be $14,174 for a New York State undergraduate student living on campus. When New York State cannot afford the budget that SUNY schools rely on, the state universities turn to their students to fill the gap.

Some will find tuition increases to be the tipping point which will lead to a drop off of the students who already struggle to pay their bills. The SUNY New Paltz student senate and the SUNY Board of Trustees have recently proposed a rational tuition plan that would match inflation rates so students and parents know what to expect, instead of a mid-semester hike.

“We can raise tuition every year, but not in a large lump,” Gullickson said. “The rational tuition plan will allow families and students to plan for the increase and still allow the universities to maintain campuses.”

The main reason for increased tuition cost for public schools has been funding. With the faltering economy and New York nearly $50 billion in debt, there has been a decrease in funding of public schools, leading to cutbacks as well as increases in tuition.

Ronald G. Ehrenberg, author of “What’s Happening to Higher Education?” wrote about the reasons for the increased cost of college. He said states feel they are “leaving money on the table” by going for high state appropriations and low tuition prices. By state universities raising tuition, the amount of federal aid they are awarded through Pell grants, which lower-income families use to cover tuition, also rises.

Fifteen years ago, New York was supposed to cover 40 to 45 percent of SUNY colleges’ budgets. It is now down 20 percent, according to Dan Sistarenik, director of financial aid at SUNY New Paltz.

“The average student will leave college with $20,000 in debt, and that will go up as time goes on,” Sistarenik said.

Sistarenik has seen $60 million of financial aid go through his office; two-thirds of which are loans. He said he would like to see more students earn money through the Federal Work Study program (FWS), in which $5 million is invested. Over the past 15 years, there has not been an increase in funding FWS, even though minimum wage and enrollment has increased. Because of this, fewer students are able to take advantage of this program.

“Students should have more opportunity to work for the school,” Sistarenik said. “There are far more students on JobX , the off-campus job locator, than those working campus jobs. I also really think that the school should have a test that takes money off of tuition according to the scores.”

Sistarenik thinks that there are a lot of inequalities in how the financial aid program works. He said wealthy business owners, who have expensive tax account attorneys, don’t have to claim assets as long as they have 10-100 employees. These high income families have million dollar franchises, but are paying little in taxes and in turn get the aid that other students need, according to Sistarenik. On the other hand, some struggling students don’t realize that they can ask for financial help by presenting their economic situation to the financial aid office.

Sistarenik does not have all the answers but feels that the financial aid institution should look at the records in determining what to change.

“It’s frustrating; it’s not fair how they give the aid out,” Sistarenik said. “The laws have been changed in favor of the wealthy. It’s not equality. Next year, they’re changing the definition of who can get financial aid based on situation. There will be nebulous scenarios and cases that students will be able to check on the application, leading us to check up on everything. Everybody has a unique situation, how do you put that into a program which is not case sensitive?”

In his recent executive budget, Gov. Paterson proposed that the SUNY tuition hike would be returned to students, starting in the 2009-10 school year, through loan assistance in the NYHELPS program, in which there will be $10 million invested annually. Through the State of New York Mortgage Agency (SONYMA) purchasing loans from banks and issuing bonds students will be able to take out loans guaranteed to be cheaper than those from private lenders.

Gullickson agrees with Gov. Paterson making his loan program competitive and available but, in a larger view would like to see more federal funding for state universities. Nationwide higher education is labor intensive, requiring a lot of faculty and staff, making it expensive he said.

“The way the federal government allocates funding toward education directly affects how states deal with their money,” Gullickson said. “These resources have been going to wars. A shift in policy and leadership could change that, and I think in the next four years, there will be more efforts made toward federally funding education.”

Sistarenik hopes that within a few years the president will be able to look nationally at higher education, keeping costs down and financial aid up. He said that it is important to keep the private and public sectors involved because if government takes over it can become too bureaucratic, or even a monopoly.

Sociology major at Vassar College Colin Bernatzky pays $25,000 a semester and feels that college should put the business of educating students first.

“I think education should be made available to everyone,” said Bernatsky. “I think the path Obama takes will shape the future, so we’ll see.”

Robert J. Michael, dean of the School of education at SUNY New Paltz said that a lot of people in the education department and students have high hopes for Obama.

“I hope he will bring about the change needed, particularly in higher education,” Michael said. “People don’t realize how the funding has been cut drastically… We should be doing whatever we can: work study programs, more scholarships, and low-cost loans. I would support any means that will help students get a higher education.”

Wed Mar 25 , 2009
He sat down at the bar and ordered a pint. Removing his gloves, he turned and nodded at his pals. “You seen any of my brothers?” “Not since yesterday,” replied the bartender, serving him his Budweiser. “But it’s not even noon so I expect them soon enough.” Chuckling, he buried […] 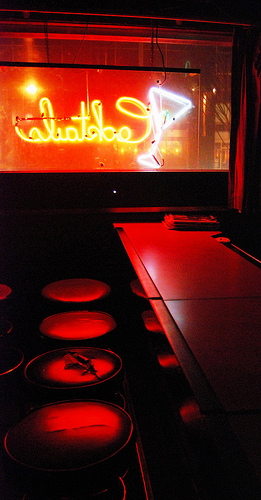