Students and New Paltz residents can now enjoy a cup of spiced hot cocoa, play a game of chess, catch a live show, attend a workshop or sit down with a consultant and talk about computer problems at the /Root Café: the grassroots tech café, pronounced “Slash Root Café.” Owner Justin Holmes and Amanda Catherine Stauble said they have made efforts to make what was once 60 Main a place that makes computer repair and communal gatherings more accessible.

The forward slash in the café’s name is a double entendre: on one side the forward slash is the name of the home folder of the super user in Linux “which means you are in control and feel empowered instead of intimidated,” according to Holmes.  On the other hand, the “/Root Café” aims to, “slash the roots of proprietary software and plant the seeds of freedom,” Holmes said. In other words, to educate the public on the benefits of open-source software (OSS), software in which the source code has been lifted so users may alter the software to their needs.

“[It] has a different level of activism: is all direct action and very little energy wasted on lobbying,” said Holmes of alternative operating software, such as Ubantu or Linux., operating systems similar to Windows and Office.

In an effort to preserve freedom, justice and peace in technology, Holmes reminds that the need of open-source software is to answer the specific problems that our generation has with issues such as privacy, censorship and prevalence. Holmes and Stauble explain that open-source software is a public domain focused on preserving free speech as opposed to closed-source which “is not user friendly, not comfortable and less accepting of creativity,”said Holmes.

At $15 for 15 minutes, Stauble and Holmes said they will sit down and help visitors every step of the way. Whether you’re having problems with hardware, software, or building a website this one-on-one consultation will help solve your issues. They do not stock any parts in house but will order from http://www.newegg.com/ if necessary. “This isn’t a retail based business where you are pushed to buy unnecessary parts or accessories,” said Holmes.

Community structure and education are also a big part of what’s going on in the /Root Café. In addition to open mics, lecture series, craft night, art openings and exhibits, Stauble said they hope to have educational opportunities for kids, home schooling options for parents and a summer camp program with workshops.

“If someone knows how to do origami, we will do an origami night, or a workshop on plants, or anything that educates and inspires,” Stauble said. /Root Café also keeps a mini picnic table and toys around for children. “They can run around and play and I am usually sitting on the floor with them,” she said.

Holmes and Stauble support local artists by selling their jewelry and pottery consignment style. To reuse as much as possible, local plant enthusiast Jason Rosenberg takes the /Root Café’s compost to the New Paltz Community Gardens and turns it into mulch for plants. The café also uses reusable in-house cups as well as recyclable to-go cups in which they serve fair trade coffee roasted locally with triple filtered water and local organic milk.

/Root Cafe will also provide laptops to rent out for use in the space.  In addition they plan to install webcams throughout; the idea is to attract more people by enabling them to see what’s going on in the café when at home and to create a more inviting feel. These cameras will stream live music and art events, as well as previously recorded material for a more interactive experience.

In an effort to further promote communal growth, Holmes and Stauble are giving the company to the people in the form of a membership. For $15 a month members receive 20 percent off food and beverages, 50 percent off most events which teach technological skills. There are also member only events such as workshops for learning higher-level technology skills, being held on the first and third quarter moon calender days.

A step up in membership is the Members in Motion program in which, selected on application basis, one would work two to four hours a day, for two days, to help out with technology concerns or behind the bar and learn the essentials of fair trade and open-source software. Since the business cycle is perpendicular to the moon cycle, Members in Motion receive 10 shares of the company for every moon cycle completed. “We really want to build our business together as a family,” said Holmes.

Holmes and Stauble are planning a tentative grand opening for the company on the spring equinox, or March 20, at 7 p.m. The opening includes a potluck, cake, a drum circle and workshops for kids. Special guest, Tony Vacca, a world rhythm percussionist, will also be in attendance.

To hear an audio story on Slashroot Café, follow this link.

Wed Mar 3 , 2010
RecycleMania is a 10-week long competition between a number of both private and public universities to raise awareness for the three R’s: reduce, reuse and recycle. This will mark the second consecutive year SUNY New Paltz is participating. Lauren Brois, SUNY New Paltz’s Recycling Club president, said the rising social awareness for […] 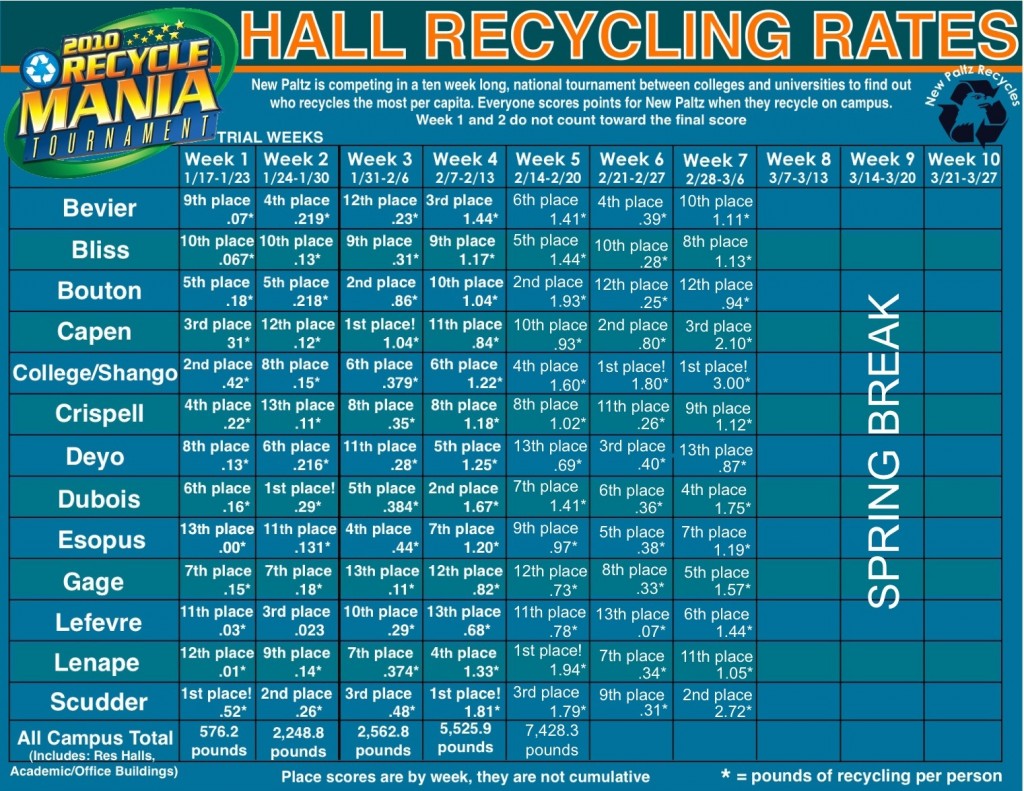