In a dark room, two figures are illuminated: One is wearing a white dress shirt, a clip fastened to his crimson and black striped tie, and the other is a lot smaller, dressed in a similar uniform. The larger figure, the headmaster of a private school in New Hampshire, thrusts a pointed finger at the boy in front of him. “This is my school!” he shouts angrily. He tells the boy that he can throw him out if he pleases. The pupil, perspiring slightly from the intensity of the exchange, places one hand on his hip and extends the other hand towards his superior, palm facing upwards, pleading with him. “But why is this your school?” he asks, exasperated. “I have to earn your respect, but you don’t have to earn mine? What is that?”

This is one of the many palpable scenes from “Prodigal Son,” an off-Broadway play about a struggling 17-year-old trying to find his place in the world. The boy, Jim Quinn, was played by young heartthrob and acclaimed actor, Timothee Chalamet, who later went on to star in award winning motion pictures like “Lady Bird” and “Call Me By Your Name.” The show premiered in 2016 at the Manhattan Theatre Club, and earned enthusiastic praise from critics at the New York Times and Time Out New York.

Two years after its successful debut in New York City, another rendition of “Prodigal Son” was performed by a small theater troupe in the tiny college town of New Paltz, two hours north of the city. But New Paltz is not Broadway.

The venue was no Manhattan Theatre Club, more of a cramped basement in a student’s apartment building, and there was no Timothee Chalamet. There was, however, an ambitious group of college students who were struggling to find a place in their competitive theater department, but were determined to forge their own path.

At SUNY New Paltz, students in the Fine and Performing Arts program learn the tricks of the trade by getting hands-on experience in school sponsored productions, but not all students are guaranteed a role every semester.

According to SUNY New Paltz, the school’s Department of Theatre Arts grew by more than 60 percent between 2009 and 2014. Alumni from the burgeoning theater department at New Paltz have gone on to become Emmy-winning actors, lighting directors, Broadway designers and stage managers. John Turturro, who played Jesus Quintana in the cult classic “The Big Lebowski” and Michael Gladis, who played Paul Kinsey in “Mad Men,” are Department of Theatre Arts at New Paltz alumni.

Joshua Ezra Huberman, 24, transferred from Suffolk County Community College in Long Island to SUNY New Paltz specifically for the theater program, which was named one of the top ten in the country in 2018. Huberman was used to having a leading role in productions, having directed over a dozen shows both for school and a variety of children’s theaters in Long Island.

After visiting New Paltz in 2017 and watching “A Comedy of Errors” at Parker Theater, he was convinced that the school would be the place where he could pursue his passion for drama.

This past fall semester, Huberman was looking forward to being a part of the school’s production of “Henry V”, but he didn’t make the cut. “I was personally a little bummed to miss out on that because I’m a huge Shakespeare nerd,” he said. Regardless, Huberman understood that New Paltz’s theater department, and the industry itself, is competitive.

Lucas Anderson, 20, had also been overlooked for roles in productions that he auditioned for that semester, but remained humble. “I don’t ever feel a sense of entitlement,” said Anderson. “If you’re going into this industry thinking that you’re not going to have rejection, that’s not necessarily a great mindset to have.”

Anderson grew up playing baseball and loving sports. Then, when he reached his sophomore year in high school, a teacher convinced him to try out for the school play and it opened up his eyes to the world of dramatic arts. “Something changed. I realized how deep and meaningful it could all be. The things that this artform can do is out of this world,” Anderson said.

Even though Huberman and Anderson were not going to be involved in the school productions that they had hoped to be, the two were still determined to be a part of something. So they decided to work together to put on their own show.

A play about overcoming adversity and finding yourself in the process was the perfect choice for a group of rejected theater kids. After reaching out to their network of fellow New Paltz students, Huberman and his friends quickly assembled a ragtag cast and crew for their off-campus production of “Prodigal Son,” calling their troupe The Backyard Players.

Jim Quinn, the main character, was played by Anderson. Quinn, played by Chalamet previously, is a rebellious 17-year-old boy from the Bronx who is struggling with his studies, so he is transferred to an all boys school in Massachusetts where he frequently butts heads with the school’s strict headmaster.

“It was an interesting role to play,” said Anderson. “We had so little time and it was a little bit stressful, but rewarding in the end,” he said.

Tricor Theatre House, an apartment building famous among the students at New Paltz for its basement that has been converted into a makeshift theater, was the play’s humble backdrop. “It’s literally just a basement,” said Huberman, whose aunt used to tell him stories about the productions that took place in Tricor when she was a student at New Paltz.

“We always joked around that it’s not the Backyard Players, it’s the Basement Players now,” said Anderson. “It was very small,” he said when describing the performance space. “There was no space to waste space, you can use all of it.”

As legendary as the Tricor Theatre House was amongst the theater students at New Paltz, it presented some serious challenges for the technical crew.

Gabrielle Rivera, 21, was approached by Huberman to be the lighting designer for the “Prodigal Son.” It would be her first experience as lighting designer, but she was excited nonetheless. “I’ve done a lot of assistant work,” she said, “but I have never done anything outside of campus. This was the first time I was able to completely have fun with it.”

For a main stage production on campus, a lighting designer typically has hundreds of high quality lights to work with. “[At Tricor] I had six lights and a lamp that I tied to the ceiling,” said Rivera. Of the six lights, only two were dimming lights.

Due to the lack of lighting, the space was dark and it was hard for some of the crew to see during performances. “I couldn’t see anything. I was just flipping switches with a flashlight in my hands. I messed up once or twice,” said Rivera.

In order to coordinate lighting and sound cues, Rivera and sound designer Ethan Massa, 21, would signal each other by giving a thumbs up from behind their respective curtains.

On top of the technical obstacles that Rivera and Massa had to work around, at one point the basement flooded before the crew was going to install the wires needed for sound and lights. Then Rivera came down with the flu just in time for the first performance. “It was totally a stressful process,” she said, “but I would do it again in a heartbeat.”

“Prodigal Son,” performed by New Paltz’s Backyard Players, premiered on Dec. 13, 2019 and closed the very next day, Sunday, Dec. 14. With the help of 14 New Paltz students as either cast and crew, it took the troupe less than a month to put the whole production together.

Anderson still has a year of schooling left and hasn’t yet decided what he wants to do in the future, but he knows that he wants to act. He says that friends of his have graduated and are in New York City finding auditions and trying to break into the professional theater world. “It’s stressful. It’s crazy. It’s wild, but that’s the ultimate goal,” he says.

Huberman and Rivera are both seniors at New Paltz. Although he does enjoy directing children’s theater, Huberman would like to pursue a career in acting, writing, directing or all three if he can. Rivera hopes that she can find a job as a lighting designer, ideally on Broadway. She also hopes that the Backyard Players can come together again to produce one more show before she graduates in two months.

Thu Mar 12 , 2020
What were once known as emblems donned only by felons, are now becoming a procedure adored by artists and slowly gaining more respect. The Little Rebellion would like to warn readers that this article speaks of tattoos and has both photo and video footage of needles. Please be advised. By […] 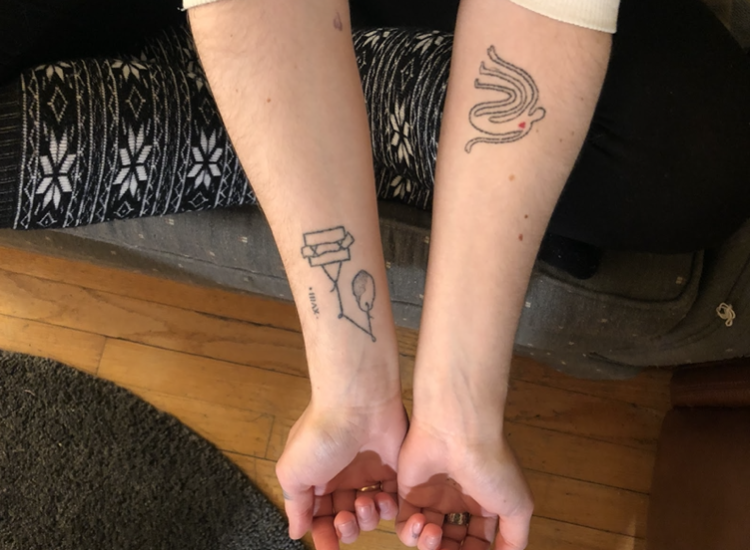