The New York State Comptroller is labeling the district under moderate fiscal stress for the 2014-2015 school year.  The fund balance of the district is significantly low, and this is not due to financial mismanagement.

“The New Paltz School Board made a conscious decision to expend the fund balance to maintain as much of our programs and staff as possible without overburdening the taxpayers,” Board of Education President Brian Cournoyer stated. “The board and administration’s philosophy is that our first and most important job is to provide the highest level of education possible to our students.”

The main culprit to the district’s financial situation is the Gap Elimination Adjustment (GEA).  The GEA was created during the 2009-2010 fiscal year in order to fill the state’s $10 billion budget deficit by reducing state aid to school districts.  According to Richard Linden, the New Paltz School District has lost approximately over $10 million to the GEA since it has been established.  This school year, the school district has now lost $1.4 million in funding cuts.

Tax caps are also another factor in the district’s financial stress.  The Property Tax Cap, which was established soon after the GEA, is a complex formula that establishes a limit on how much tax revenue a school district can collect.  Although this has helped lower property owner’s taxes, this had a negative impact on the district.

Due to these financial losses, the district had no other choice but to cut school programs and lay off staff members.  Linden reports that 60 staff members had to be laid off, and approximately half of these members were teachers.  Programs that were cut in order to lower the financial stress of the district include classes that did not meet the 15-registered student requirement and the district’s Pre-K program.

“When we can’t serve our youngest children, it significantly impacts trajectory as they grow.”

According to Chiger, it is very unlikely that these programs will be restored any time soon.  It is also reported that cuts are still going to be made to other programs, and could possibly lead to more staff lay offs.

Students have had the misfortune of hardships in the classroom due to these layoffs and program cuts.  Class sizes have been significantly increased, causing many dilemmas.  Classes now contain 30 to 35 students, which is creating a bigger student to teacher ratio.  This may cause students to not get the required attention they need by a teacher.  These class sizes are also extremely large for the small classrooms, and cause the room to be filled over the proper safety limit.  The Board of Education of the New Paltz School District stated that the district tried to restore staff to decrease class sizes during the 2013-2014 school year, but were unable to do so due to financial reasons.

There are many other solutions that the state government could have used rather than reducing state aid to school districts.  An alternative solution for the state to receive enough finances may be within the stock transfer tax, which charges each stock share traded in the state between one to five cents.  According to Cournoyer, the state collects billions of dollars in stock transfer tax each year, but rebates 100 percent of the money back to the shareholders.  If the state decided to keep the money collected rather than giving it back, the state school districts would at least have significantly less aid taken away from them.

It has been reported that New York State now has a surplus of money, yet the districts are still suffering these funding cuts.  Cournoyer states that it is unlikely the district will ever see the money that has been taken from it since the GEA has been established.  “Our hope is that the state legislature will act to end the GEA and restore state aid to the full amount we should be receiving,” Cournoyer said.

“There are incredibly wonderful things happening in our schools,” Chiger said. “We want to be able to continue doing them.”

Thu Apr 16 , 2015
By Katherine Carroll “Raise hell, not tuition!” These were the chants heard by many as SUNY New Paltz students gathered to protest proposed tuition increases throughout the SUNY system. New York Students Rising (NYSR), New York Public Interest Research Group (NYPIRG), the Student Association, and student senators were some of […] 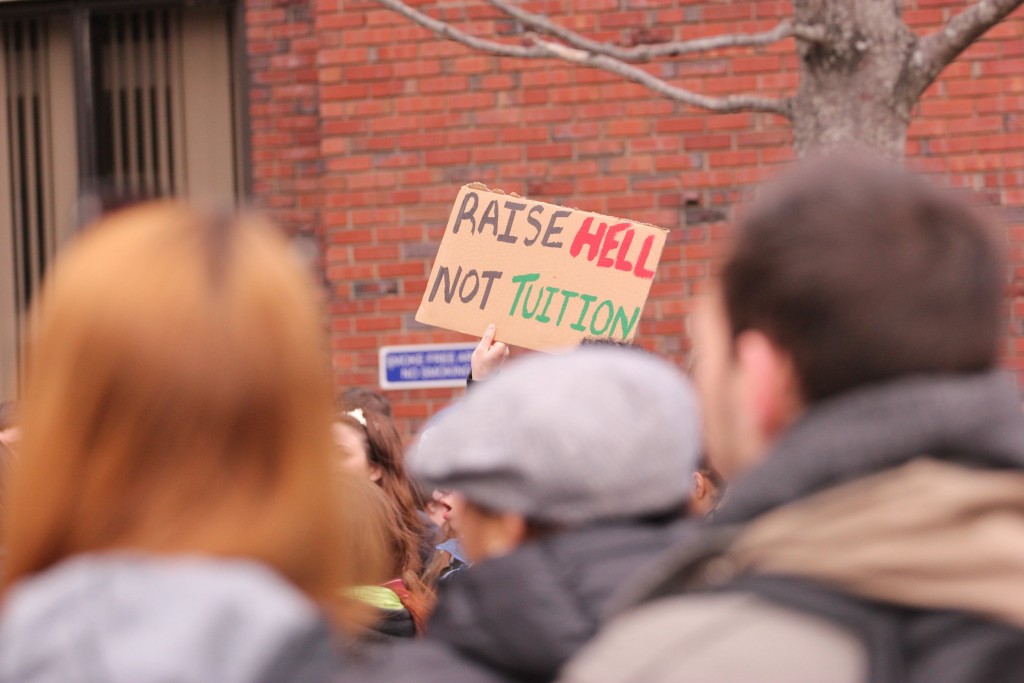