Over a decade ago, UCLA professor Enrico Moretti and University of Western Ontario professor Lance Lochner published a study titled The Effect of Education on Crime: Evidence from Prison Inmates, Arrests, and Self-Reports. In it, the researchers suggest that a person’s education level has a significant impact on the likelihood someone will take part in criminal activity in the future.

In the study, Moretti and Lochner write:

Schooling significantly reduces the probability of incarceration. Differences in educational attainment between black and white men explain 23 percent of the black-white gap in male incarceration rates. We corroborate our findings on incarceration using FBI data on arrests that distinguish among different types of crimes. The biggest impacts of education are associated with murder, assault, and motor vehicle theft.

But while reviewing the aforementioned FBI data on arrests, a pattern began to emerge.

According to the FBI, in 2013 regions with a population of less than 10,000 had a rate of over 96 percent of aggravated assault without a weapon (i.e. hands, fists, feet) and a rate of over 238 percent of unlawful entry, both of which are significantly higher than the national average as well as the average rate for large metropolitan areas and counties. This unexpected finding seems rather unusual, since small towns are prized for their “safe culture:” where kids can run free, homeowners don’t lock their doors, and nobody suspects anything of their neighbor.

While many Americans still perceive small towns and rural areas as safer than their big-bad-city counterpart, this notion is supported by misleading data that doesn’t account for nonviolent crimes like harassment, stalking, arson, vandalism, etc.

Urban areas may have reported more instances of violent crime, but it’s nearly impossible to appoint a safety rating to regions whose most common types of crimes aren’t reported, logged or tracked on a national level.

The terms “cities,” “incorporated places,” “urban” and “metropolitan areas” are used interchangeably in colloquial language, but when it comes to interpreting the regions’ census data, each term stands in for the population estimation of that area.

Although over 60 percent of the United States population resides in incorporated areas or cities, these areas only make up a small fraction of the land within U.S. borders. According to the United States Census, in 2013 the population of people living in cities was highest in the West (76.4 percent) and the Midwest (71.2 percent), followed by the South (54.7 percent) and the Northeast (51.3 percent). Darryl Cohen, a Census Bureau analyst, described these data findings in his report Population Trends in Incorporated Places: 2000 to 2013 published by the United States Census in March 2015. In this, Cohen offers an explanation for this population phenomena.

“The higher percentage of people living in cities in the West can partly be explained by the limited access to water outside of Western cities and federally held land surrounding many of these cities which limits growth outside incorporated areas,” he wrote.

Cohen discovered that approximately two-thirds of Americans live in cities. His research and analysis concluded that “patterns of population change among cities and the social and economic conditions affecting them, often represent national trends.”

Cohen’s findings aren’t all that surprising. Considering the majority of Americans live in cities, the trends of those cities should be similar to or even reflect that of national trends.

But according to Cohen, there isn’t just one type of city. The stereotypical skylines associated with places like New York City and Seattle aren’t found in every city across the U.S.. In fact, each city is about as unique as the last. As Cohen explains, “A city can be partly urban and partly rural, and may be inside or outside of a metropolitan statistical area.”

Metropolitan Areas, Cities, Urban Clusters and Rural Areas: What Do These Terms Mean?

A metropolitan area, however, must contain multiple counties that have a core urban area and a population of at least 50,000 people with various social, cultural and economic backgrounds. And any region that falls under any of these population quotas is considered a rural area, or small town in this case.

According to FindTheData.com, which uses data collected by the Uniform Crime Reporting Program — a division of the FBI, regions with the highest overall crime rate had an average population of 432 persons. Which in U.S. Census terms means that the towns with the highest crime rates weren’t found in or around metropolitan areas, but in urban clusters or more rural areas.

So if small towns aren’t as safe as they were originally thought to be, what’s living in these rural areas really like?

According to 21-year-old SUNY New Paltz student Rebecca Young, living in a rural America can force people, especially impressionable kids, teens looking to fit in and minorities to repress any form of their personal culture that is out of the “norm” for that area. Young, who is originally from Pine Bush, New York (just a short distance from the ever-liberal New Paltz), said she experienced similar feelings of repression in her hometown of just under 2,000 people.

“I never told any of my friends that I was Jewish,” Young said. “I didn’t even invite them to my bat mitzvah because I didn’t want anyone to know about my religious beliefs. It took me going away to college to realize that because of the highly anti-Semitic behavior in my hometown that I couldn’t embrace my full self.”

In 2012, the Pine Bush School District was served with a lawsuit for allegedly failing to protect the Jewish students from anti-Semitic bullying, slurs and other forms of intimidation. Then, in 2015, the school district settled the suit for $4.48 million, according to The New York Times.

Young also describes her hometown as being overrun with drug abusers, which coincides with the high property crime rate.

“My house was broken into a few years ago and we actually walked in on the suspect trying to flee, so we called the cops,” Young said. “But the cops didn’t show up until the next day– they were about 30 hours late to respond.”

Matt Joyce, a 21-year-old deli-worker, also experienced corruption within his local community, as well as racist remarks and other forms of inexcusable behavior while residing in Arendtsville, Pennsylvania. Joyce recently retreated from Arendtsville, a town with a population of just 954, to New Paltz to escape what he refers to as “fertile crescent culture” and the town’s rampant opioid epidemic.

“There’s literally nothing to do there except drink, do drugs and have sex,” Joyce said. “When I was filling out job applications my availability was more important to the employer than any relevant experience I had because none of the young adults in that area have the means to go further their education, or like I said anything to do, so teenage pregnancy isn’t uncommon at all. Especially since the Pennsylvania public school system is garbage.”

As with other states, Pennsylvania uses taxpayer money to fund their public schools. Although the federal government supplements some of the tuition, the onus is on local government officials to fund the budget. Three separate taxes: property, sales and income, are utilized by local municipalities to finance elementary education, but it’s the property wealth of a community that really determines how well a school is able to foster education.

Joyce went on to describe the seemingly endless number of student behavioral problems that are completely overlooked by the school system. Whether the correlation is in fact a causation remains to be determined.

“My older brother was employed as a utility worker in one of the schools and kids would literally smear feces all over and across the walls,” he said. “If that’s not a sign of something even more wrong going on behind the scenes, I don’t know what is.”

Just as Young had encountered in Pine Bush, Joyce had similar experiences with racism and bigotry in Arendtsville.

“My step-mom is Italian and she has really olive skin, which stands out in this white-washed town. So she’s been called an ‘apple-picker’ which is a slur that these ultra-conservative, white people have developed to insult migrant workers, usually of Hispanic or Latinx descent, who make their way all the way to bumble-fuck P.A. for work,” he said. “But this slur pretty much applies to anyone who doesn’t look caucasian.”

Although Joyce’s family still resides in Arendtsville, he couldn’t get out of there quick enough.

“I moved out of Pennsylvania as fast as I could and into my friend’s’ basement. I needed to get out of that bubble,” Joyce said. “But I recognize that not everybody has that opportunity, especially in a town as desolate as Arendtsville. There’s no mobility there and that’s sad.”

“Although there is a greater likelihood that residents will be aware of common problems facing the community, that doesn’t necessarily lead to uniformity in how to understand or approach issues,” Obach said. “But given the size, there is likely to be common awareness. However, I would think that much of this depends on the diversity of the community and the education levels. If it’s a homogeneous group culturally, then I suspect there is a greater likelihood of members developing a similar outlook.”

Obach also gave reasoning as to why smaller towns and rural communities tend to be less diverse and more homogeneous.

“Historical factors. People tend to settle where they have connections with people. We live in a largely segregated society — even in large cities. But it’s more noticeable in a small, homogeneous community,” he said.

Similar to the discrimination described by Young and Joyce, researchers Eric Swank, Breanne Fahs and David Frost published a study in Sociological Inquiry titled Region, Social Identities, and Disclosure Practices as Predictors of Heterosexist Discrimination Against Sexual Minorities in the United States*. Swank, Fahs and Frost discovered that “exposure to heterosexist discrimination may vary by a person’s place of residency.”

In their study, the three researchers examined whether or not rural and small town occupants experienced greater exposure to six types of enacted stigma.

So although small towns may have a reputation for safety, it’s really only for those who fall into the majority. So what’s to be done to protect the minority? Obach believes that it’s time for the people of the United States to make some huge progressive pushes towards equality and away from xenophobic ideology.

“Much segregation is a product of formal and informal policy — in terms of housing, jobs, and education. If we eliminated the institutional mechanism that maintains segregation, then we’d see more diverse communities,” Obach said.

How to Beat the Freshman Fifteen

Tue May 16 , 2017
Maintaining a healthy lifestyle while attending college is often seen as a difficult task. The “freshman fifteen” phenomena occurs because schools provide a relaxed environment that allows students to eat whatever they want, whenever they want. Many students struggle to strike a balance between eating conveniently and healthy. Yet students have […] 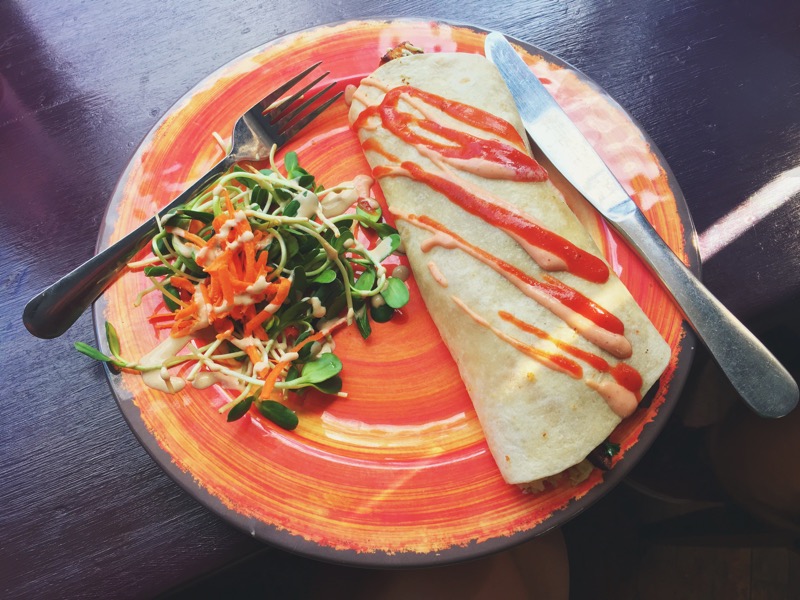