With the presidential election approaching, many organizations on campus are assisting students in promotion of their vote.

NYPIRG, alongside many fraternities and sororities, has voiced its opinion on the importance of voting on Nov. 8.

“It is our duty as citizens to vote,” said Anne Flamio, project leader of NYPIRG at SUNY New Paltz. “It is the most immediate way we can voice our opinion and practice our freedom of speech.”

Flamio believes that the most effective way to inform a student about voting is getting them to register.

Up until Election Day, organizations will be educating students on the voting process in hopes of reversing the low student-voter turn out. Members of Sigma Lambda Upsilon/Señoritas Latinas Unidas Sorority, Inc. have encouraged students to register to vote by tabling in the Student Union Building and answering any questions in regards to the registration process, including the submission of their applications.

The shared goal of these organizations is to promote the vote, regardless of which party is being voted for, and encourage students to take advantage of their freedom. According to CNBC, in 2008, 44 percent of 18-24-year-olds voted, in the 2012 election that number decreased to 38 percent. With a downward trend, clubs like these hope to encourage SUNY New Paltz students to vote.

Ridalby Abreu, member of La Unidad Latina, Lambda Upsilon Lambda Fraternity Incorporated, not only tabled alongside the Señoritas, but hosted an educational program called “Promote the Vote” to encourage Latino and African American voters. They also dissected the reason behind the under representation of Latino voting.

“Our decisions will impact the future and generations after us. In addition, it is important to have discussions in the college community to raise awareness,” Abreu said. “We noticed a huge disparity on the lack of Latino voting in the past elections and wanted to raise awareness.”

“The most effective way seems to be by word of mouth, and by conducting programs such as these for the student population that highlight the importance behind your vote as a Latino,” said Jennifer Castillo, member of The Outrageous Divas. “Latinos tend to have a lower registration rate, meaning there are not enough of us voting compared to our total population in the United States.”

Mon Nov 14 , 2016
By Nick Tantillo On the morning of Election Day, Brandy Fane hurries to the second floor of the Student Union Building. She stops short of the polling center, and takes a few steps towards an attendant on the other side of the room. She hesitates, turns and addresses a group of […] 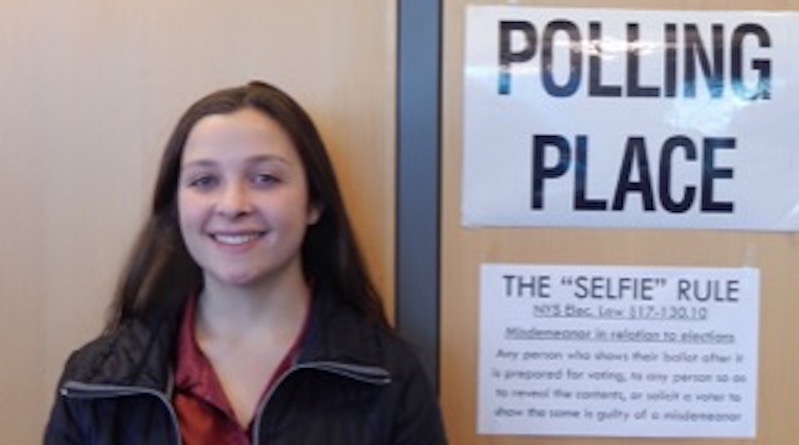