“It’s all about making money, but you have to love what you do,” said Mickey Jamal as 300 eager business students listened intently while many frantically jotted down notes.

Oct. 27 marked the first ever “Business Leaders of the 21st Century” lecture and Q&A held on campus. Students flocked to the Atrium to absorb the advice and wisdom of some of SUNY New Paltz’s most successful business alumni.

Mickey Jamal, founder and CEO of CPD Energy, was one of the four business alumni that shared his success story and advice to students. Jamal opened his first gas station in New Paltz in 1981, with a vision to double in size every five years and to become the best in the industry. It was an ambitious goal, but Jamal was up for the challenge.

“Surround yourself with successful people and you will be successful,” Jamal said. Nearly 40 years later, Jamal’s business remains the cornerstone of a retail and wholesale enterprise. His position was achieved through constant innovation, exceptional customer service and a finely honed attention to detail.

Nora Fay, vice president of the Lucifer Lighting Company, did not have a business career in mind when she first came to SUNY New Paltz. Originally an anthropology and biology major, Fay had a dream of one day teaching at SUNY New Paltz. After personal issues kept her from achieving that dream, she became interested in pursuing a career in architecture.

“The method I used for memorizing huge amounts of information for my anthropology and biology tests at SUNY New Paltz is what I used to pass my construction tests,” Fay said.

Fay moved up the construction ladder and at one point in her career spent four years as a principal in a major NYC construction firm where she was responsible for generating $100 million in new construction opportunities for the company.

“The best advice I can give you is networking is everything,” Fitzarnaz Drummond, vice president of Treasury of Deutsche Bank in London, said. “Make yourself larger than your resume.”

Drummond went from being a financial analysts for a small bank in Middletown, NY, to becoming the VP of treasury at Europe’s largest bank six years later.

“I was an EOP student, I never took an accounting or finance class a day in my life, and I’ve managed a $5 billion balance sheet for multi-billion dollar companies,” Ken Pasternak, Founder and Executive Chairman of KABR Group, said.

Pasternak noticed at a young age that the prices of cars at his father’s car auction were very erratic, so he honed his skill of measuring supply and demand. After mastering auctioning off cars he took his skills to Wall Street and started to climb the ladder of the stock market, becoming the CEO of his own company, and retiring at the age of 39.

“I’ve always said, don’t go to an Ivy League school, make [your school] work for you. Keep your elbows sharp and swing away,” Pasternak said.

Krystal Caceres, business student and student supervisor for the event, was eager for the opportunity to hear from such successful alumni from her field of study.

“The fact that they were from New Paltz was pretty inspiring,” Caceres said, “I found their different takes on networking most beneficial to my business career.”

Teresa Mandrin, New Paltz student, took away some valuable information from the event even though she is not a business major.

“I think you should pick a major you are passionate about, it goes to show that even down the line if you don’t land a job in your field you can still take what you learn at New Paltz and put it toward your future,” Mandrin said.

My name is Peter Piscitello and I’m from Brooklyn, New York. I’m a fourth-year journalism major with a writing focus in film and psychology.

Video of the Week: "Man on the Street"

Sat Nov 22 , 2014
Journalism 1 students representing The Little Rebellion asked SUNY New Paltz students some seemingly simple questions: who is the president of the college?  What explorer sailed down the Hudson River?  What do the 13 stripes on the American flag represent?  See what our “man on the street” discovered. Video by Patrick […] 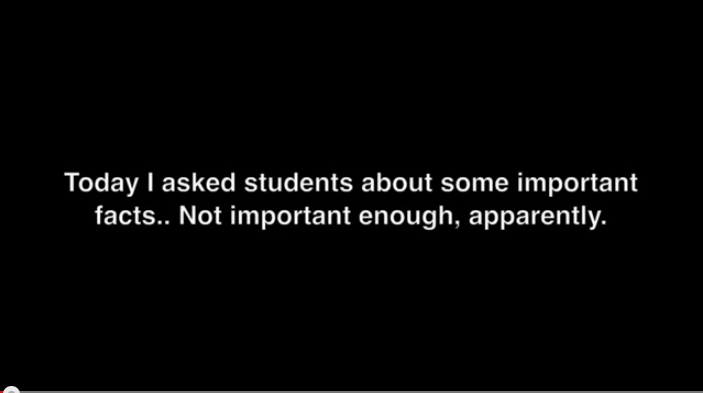