Local engineering companies and community colleges are teaming up to promote STEM (Science Technology Engineering Math) education in the Hudson Valley to match students’ knowledge with the requirements of the competitive workforce.

This solution might be considered long term, but it tackles a problem that has been brewing for years at the local and national level: the ‘skills gap.’

Unemployment rates in the Hudson Valley region are the second lowest in New York State, according to the U.S. Department of Labor. However, there are many job positions, especially in engineering, that remain unfilled. Here lies the ‘skills gap,’ the disconnect between the skill set of job seekers and the skills employers need to fill these jobs.

President Barack Obama addressed the national discrepancy with job training in a speech at a General Electric plant in Wisconsin.

“We gotta move away from what my labor secretary Tom Perez calls ‘train and pray,’” Obama said. “You train workers first and then you hope they get a job.”

Claus Kinder, CEO of Hudson Valley-based Zumtobel Lighting Inc. said, “Consistently, in the last 12 years, it has always been an issue finding degreed and experienced engineers.”

There are approximately 100 companies in the Hudson Valley that need engineering talent. However, there are more engineers retiring than entering this field of work.

Students in the region that excel in math and science typically pursue careers in finance, according to Laurence Gottlieb, president and CEO of the Hudson Valley Economic Development Corporation.

“The region is always a feeder for talent on Wall Street, being it is the biggest economic engine for New York State and people’s personal wallets,” Gottlieb said.

The degradation of manufacturing in New York State might have cost the Hudson Valley a whole generation of engineers.

Dr. Kanan, a professor in the School of Business at SUNY New Paltz, said “the economic environment is just not very friendly.”

Since there are few job positions that match up with degreed engineers’ skills, job seekers are forced to expand their search to the greater Metropolitan area. Now, engineers that go to school in the Hudson Valley are not engaged to stay here and local companies are still left with open job positions.

As Gottlieb said, “You can’t keep them down on the farm once they see the lights of Paris.”

Linking academia with private industry opportunities could be the key to closing the ‘skills gap’ and strengthening the local economy.

Mediacom, a cable television company, and the Council of Industry, the manufacturer’s association in the Hudson Valley, partnered with the Board of Cooperative Educational Services (BOCES) in four counties (Ulster, Dutchess, Orange and Sullivan) to align student coursework from high school through community college with industries. The programs, Pathways in Technology Early College High School (P-Tech) and Trade Adjustment Assistance Community College and Career Training (TAACCT) are funded by government grants and are of no costs to students.

According to Bonita Meadow, grant coordinator at Ulster BOCES, P-Tech will allow students to receive a high school diploma and an associate’s degree in six years. Mentorships will be available to students, so they can build relationships with possible future employers and gain exposure. BOCES has an open dialogue with SUNY New Paltz if students want to pursue a four-year degree in engineering.

“It’s more of an immediate solution,” said Harold King, executive vice president of the Council of Industry. “We try to get people who are in their second career, underemployed, or laid off, and give them the skills to match open engineering positions.”

To a CEO like Kinder, these grant programs are music to his ears.

“The only short term fix I can think of would be to pay a bonus fee to attract engineers into the Hudson Valley. But with relocation fees on top of the bonuses it’s very expensive for companies to take on. Building a foundation with education is now key,” Kinder said.

P-Tech and TAACCT were awarded to the Hudson Valley last August and are currently in their planning stages.

Thu Apr 24 , 2014
Although not quite as technical as the Starship Enterprise, over 70 people crowded into a SUNY New Paltz conference room to get a closer look at Google Glass, a wearable glasses-like computer presented by a leading Google Developer Expert (GDE) on April 17. GDE Allen Firstenberg gave a talk titled […] 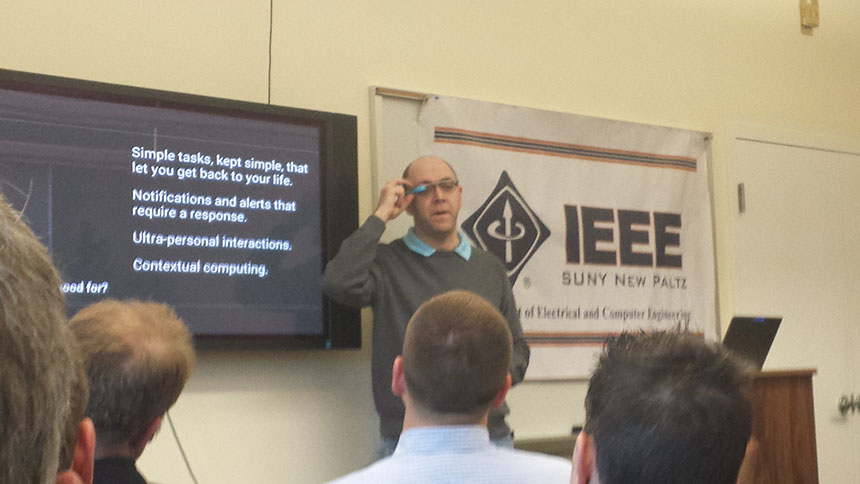