In the spring of 2008, Harris Wichard was a high school senior getting ready for prom and graduation.

Wichard, now a fourth-year public communications major, also had his basketball future in limbo. He had to decide where he wanted to take his talents to next.

“My original decision to come to New Paltz was mainly because of Coach Nelson,” said Wichard. “I was not highly recruited out of high school, and he was the one coach that was consistently in contact with me. The facilities were absolutely great and I knew the location would be beneficial for me.”

Four years and a college basketball career later, Wichard is in elite company. During the Hawk’s playoff loss to SUNY Oswego back in February, he poured in eight points which moved him into fifth-place on the all-time New Paltz scoring list.

“It is an unbelievable honor,” said Wichard. “I know that there have been a lot of players to lace them up for New Paltz so to be the 5th all-time leading scorer is a great honor.”

Curtis Hammond, New Paltz alum who holds the record for career points, says Wichard should be proud of his New Paltz career.

“It’s a real honor. That’s a prestigious group he has joined,” says Hammond. “Only a handful of guys who have played have done there. He should really be proud of what he did.”

Much like his time on the court, Wichard gives the assist of that honor to the people he has been around.

“I don’t deserve all the credit there though. A lot of great playmakers to put me in positions to score, and coaches to allow me to be successful,” he said. “A lot of my points I like to think are a result of team basketball and not isolation plays or selfish shots.”

Wichard finished his career at New Paltz, where he was a starter since his freshman year, with 1,512 points. This past season, however, was his first under new head coach Mike Rejniak, who joined New Paltz after serving as an assistant coach at Amherst. Wichard said the change was a bit difficult at first because of his relationship with previous head coach Dagan Nelson.

“He [Nelson] was the person who instilled confidence in me and jump started my basketball career at the school,” said Wichard. “Everyone has a different style and I take pride in being a player who can fit in anyone’s system and be extremely coachable. Coach Rejniak came from a winning program so we all had confidence that he was putting us in a position to win basketball games.”

Wichard made the adjustment just fine, averaging 17.9 points per game in his final season wearing a Hawk uniform to cap off a tremendous career. Looking back, Wichard is very proud of the time he put in on the New Paltz basketball court.

“All I wanted to do was get better every day and help this program win basketball games,” said Wichard. “At the end of the day when people mention my name I guess I just want them to talk about my passion and love for the game.”

He now has post-graduation thoughts on his mind as he looks at life after New Paltz. Hoping to pursue basketball opportunities elsewhere, Wichard will continue to work on his game.

“I am in the prime of my athletic life and will pursue a pro career in basketball overseas,” said Wichard. “I love the game too much to not continue to play it.”

Thu May 3 , 2012
Two members of the Secular Student Alliance found President Danielle Kingsbury cleaning out her car to make room for the rest of the members. A three hour drive from New Paltz to Binghamton was going to be daunting and as president, Danielle wanted it to be a pleasant trip. They’d […] 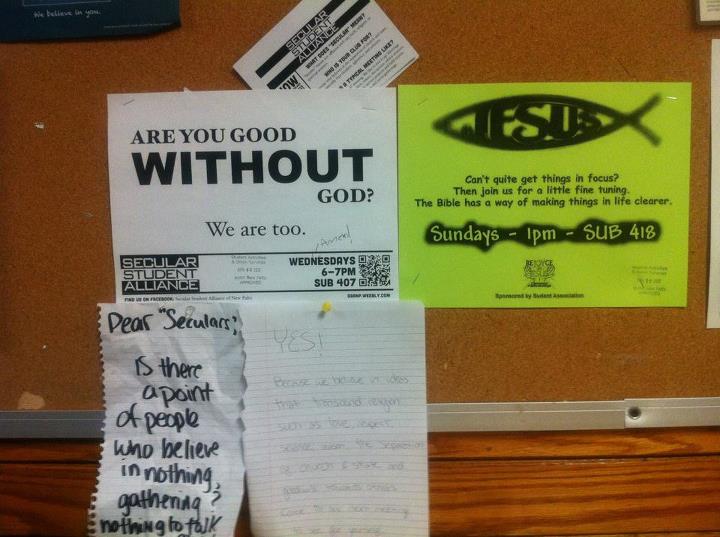