His name is Anthony Davis and he has managed to put himself in the NBA MVP conversation within just a few short years. He is mentioned in the same breath in players such as Kevin Durant and LeBron James. His averages in points, blocks, steals, rebounds and assists are mind boggling for any basketball player, let alone someone his age. Possibly the scariest fact is that he hasn’t even hit his prime yet.

Davis, now a member of the NBA team the New Orleans Pelicans, grew up in Chicago. He was six feet tall when he first entered high school, but by the end of his freshman year, Davis had grown four inches and entered his sophomore season at 6 feet 2 inches.

Due to his height, Davis originally played as a guard. He wasn’t nearly tall enough to be a power forward or center, but he still continued to grow. By his junior year in high school, he was six foot eight and began his journey to becoming a dominant power forward. As he progressed throughout his high school career, Davis’ game developed more and more until eventually, even though he went to a basically no name high school, he became the number one nationally ranked high school player in 2011.

When Davis reached senior year of high school he was 6 feet 10 inches.

His successful high school career earned him the right to choose from many top colleges. Syracuse, Ohio State, DePaul and Kentucky were the final few choices Davis came down to and ultimately decided to attend the University of Kentucky, where he would be playing for Coach John Calipari and the Kentucky Wildcats.

In his one season at Kentucky, Davis dominated the competition and averaged 14.2 points, 4.7 blocks, 1.3 steals, 1.3 assists and 10.4 rebounds. Kentucky made the NCAA tournament and made the national championship game behind strong performances by Davis and the rest of his team. His scoring averages actually improved during the NCAA tournament where he averaged 15.2 points, 11.2 rebounds, and 4.6 blocks per game. The Wildcats would go on to win the NCAA national championship.

He was the first Wildcat to win the award in 42 years.

At the end of the Wildcats season, Davis declared for the NBA draft. Due to his accomplishments on the high school and college level, he was drafted number one overall by the New Orleans Hornets (who are now known as the New Orleans Pelicans).

The hype for Davis when he entered the NBA was huge and he had a solid rookie season where he averaged 13.5 points, 1.8 blocks, 1.2 steals, 1.0 assists and 8.2 rebounds. Although he suffered through his fair share of injuries during his rookie season and missed some time, he still competed in the NBA’s rising stars challenge at the All-Star game at the Toyota Center in Houston, Texas.

Entering his second season in the league, the Hornets were renamed the Pelicans and Davis’ play improved even further. During his sophomore season in the NBA he averaged 20.8 points, 2.8 blocks (led the NBA), 1.3 steals, 1.6 assists and 10.1 rebounds. He improved in every category from his rookie year in the league and was beginning to show how dominant of a player he could be.

Now this year, being Davis’ third in the league, his averages has been incredible. During the 2014-15 NBA season, Davis has so far averaged 24.9 points, 3.1 blocks, 2.3 steals, 1.8 assists and 11.3 rebounds per games. Due to the early injury of Kevin Durant and the somewhat lackluster play of LeBron James in the beginning of the NBA season, Davis was being seen as a prime candidate to take home the NBA MVP trophy.

If he continues scoring and averaging the amount blocks, rebounds, assists and steals at this torrid pace, there is no way that he can’t be seen as a prime candidate for MVP. He really is a player that means more to his teams success than any other player in the NBA.

The New Orleans Pelicans have Anthony Davis but behind him lies…a bunch of question marks at the moment. Anthony Davis, at this point in the NBA season, is the clear cut choice for MVP. If he keeps up his high level of play, there is no reason that he won’t be MVP by the end of the season.

A Conversation with Jonathan Van Meter: Writer and Contributing Editor for Vogue

Tue Dec 9 , 2014
By Jennifer Lima   Jonathan Van Meter engaged with SUNY New Paltz students as he discussed his life and career of being a writer and contributing editor to Vogue Magazine on Tuesday, Nov. 18 at the Honors Center of College Hall. “The lecture was very informative and entertaining,” said  Stephanie Ryba, a second-year student […] 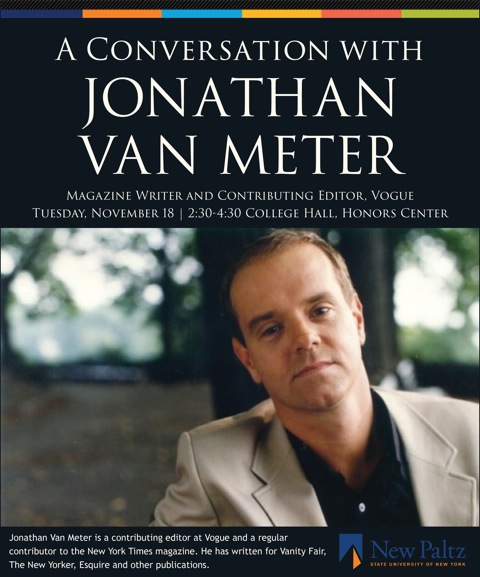