Additionally, Van Pelt was named as an AVCA All-New York Region Honorable Mention selection, which was also released on Thursday.

Van Pelt played an essential role during the 2019-20 season for the SUNY New Paltz offense, as she led the team with 339 kills, 3.26 kills per set and a career high hitting percentage of .226, while also pacing the Hawks with 377 points and 3.63 points per set. Furthermore, she finished second in digs with 293, averaging 2.82 digs per set and chipped in with 38 blocks.

“Maddie is tremendous,” said Hawks Women’s Volleyball coach Matt Giufre. “We made the decision earlier in the year to increase her role of being a front row player to an all the way full rotation player. Knowing that her passing and defense has come a long way since she started out here. That certainly helped and she worked hard and improved in those areas, but it was more because we needed her heart and soul on the court for the entire game.”

This season witnessed Van Pelt compile 27 digs, the highest in her four years, against Stockton University on Sept. 20. Van Pelt recorded her 1,000th career-kill against Plattsburgh State back on Oct. 19 in the Hawk Center, which resulted in a 3-1 win. She finishes her SUNY New Paltz career with 1,115 career kills, placing her eighth all-time behind 2009 alumna Brittany Coyle. In a non-conference matchup against Vassar College on Oct. 30, Van Pelt scored her career-high 24 points and 24 digs.

What didn’t reflect the stat sheet was her effort on every single point she played. The urgency she showcased during her senior campaign led to what definitely was her best season as a Hawk, improving all areas of her game. There were matches, as Giufre said, where she reached “libero level” dig totals, fueled by her unconscious effort to make sure the ball never hit the floor.

Van Pelt reached double-digit kills and digs in 13 of her 26 games played, which paced the Hawks, while adding 16 aces on the year, also a career-high.

“There was just a real urgency and a real care and respect for every opportunity she had to play volleyball,” Giufre said. “I think a lot of players [have that] towards the end of their last year of their career, but Maddie really had it from last spring… It was months ago that she put that kind of focus into every second of volleyball. I am really happy for her that she went out with by far her best season and just proud of the person she has become. She’s gone from the willing soldier to the profound leader in a short amount of time and it has been tremendous to watch.”

The Hawks went on to win its last two games of their SUNYAC season to get into the conference’s postseason tournament, with Van Pelt totaling a team-high 22 points on the weekend with 20 kills, 20 digs and three blocks to help her team get to the quarterfinal round. SUNY New Paltz started behind in that game against hosting SUNY Oneonta, earning two wins in the third and fourth set to push the game to a fifth. Van Pelt aided in the comeback attempt with a team-high 16 kills, 15 digs, a block, an ace and an assist.

“Maddie has worked really hard since she has been here to become a complete volleyball player. We even saw it in the quarterfinal,” Giufre said. “She didn’t get off to a great start offensively, but her serve receive was really good, her serving was good, her blocking was OK, her defense was outstanding and she is out there making winning plays in the areas that aren’t really the No. 1 thing she is known for. Once her offense started to come alive that is really how we got back into that Oneonta match,” Giufre said. The coach added, Van Pelt was a huge part of “the opportunity to win the thing when it looked really bleak at the start.”

When asked what he would miss most about the graduating senior, Giufre quickly responded, “Everything about her.”

Van Pelt leaves as one of the best and most improved players to suit up for Giufre’s team, totaling 81 wins in her career with a SUNYAC Championship and an NCAA appearance to go along with 1,209.5 total points scored through her four-year career.

To read the original article, check out this link! https://nphawks.com/news/2019/11/13/suny-new-paltz-mens-soccer-junior-midfielder-kevin-doorley-earns-second-straight-first-team-all-sunyac-nod.aspx

How to Become Politically Active on a Busy College Schedule

Thu Nov 14 , 2019
By Nikki Donohue With local elections coming up and the 2020 Democratic presidential debates in full swing, college campuses nationwide are going to be buzzing with election campaigns and political debate.  Regardless of political activity on college campuses, people between the ages of 18 to 29 have the lowest voter […] 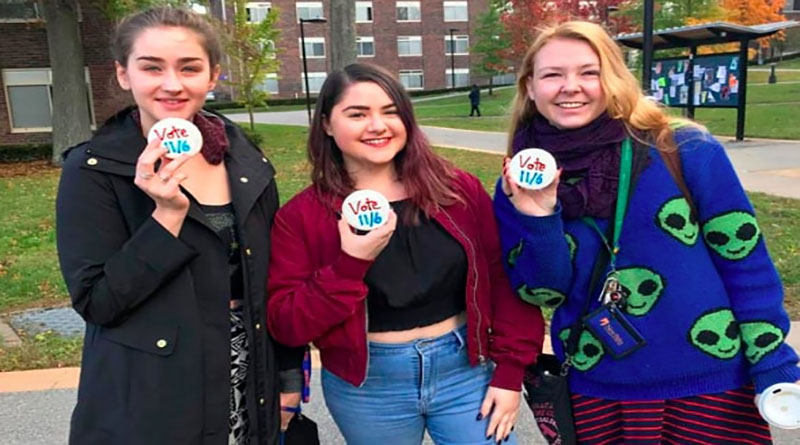