“I think we did set a bar winning against Potsdam on Friday and Plattsburgh today,” said Hawks senior forward Maddie Van Pelt. “We did really well defensively, especially today. That’s the kind of statement we want to put on this team to be really aggressive defensively. I think we showed that today. We had a couple lapses on Friday, but we brought it today and we came out with a good win.”

SUNY New Paltz (5-1 overall, 2-0 SUNYAC) swarmed the Cardinals (3-4, 1-1) from the tip, getting hands in lanes, batting away passes and doubling with every opportunity. In return, the visitors never got comfortable on the offensive end and finished just 12 baskets in the game, including only five in the first half.

After forcing 31 turnovers in another blowout victory Friday over Potsdam, the Hawks continued the trend and made the Cardinals cough up possession 23 times in the game – a season high.

“I thought we defended well,” said SUNY New Paltz coach Jamie Seward. “We mixed it up a ton and we had them kind of guessing what we were in and what we were trying to accomplish. We forced some turnovers and I think it put them in a really tentative mindset. I think that was a credit to our players focus and their aggression.”

The Hawks jumped out to a 19-10 advantage after the first quarter and piled on in the second, scoring 24 points, while forcing 14 turnovers and shooting more than 53 percent from the field. They went into the break boasting a 43-17 lead, with Van Pelt leading the way on both ends. She totaled 16 points, two rebounds, a steal, an assist and a block with a plus-minus of plus 24 in just 13 minutes of action inside the first half, which facilitated what ultimately ended in a career-high 21 points for the senior.

“It definitely felt good to get a career-high today, especially coming in with our first SUNYAC weekend,” Van Pelt said. “Our team was definitely behind me, feeding me the ball, because I feel like I did have the hot hand today. It was just a great team effort.”

Plattsburgh shot slightly better in the third quarter, but SUNY New Paltz made sure not to let the Cardinals have any life. The Hawks ballooned the lead to as many as 38 in the third after a good jumper by Marion Dietz, but the visitors answered with eight-straight points – their best stretch of the game – to reduce the hole to 30. Lexi Van Vorst put an end to the run draining a 3 on the next possession with Olivia Badura following on the next offensive stanza with another trey from deep.

“I think we had a let down here and there and a lapse of focus maybe a couple times in the third quarter. They definitely were allowed to shoot too many 3’s in the third quarter and that was something that we were trying to avoid, but I was happy with the effort,” Seward said. “They were definitely scrambling out there, scrapping and diving on loose balls. I think the score is a little bit deceiving. Like I said, they missed a lot of open 3’s and they are a good shooting team. They are probably going to take advantage more often than not, but overall I thought we had a pretty good focus in terms of the whole weekend.”

For the second-straight night, the Hawks bench made sure to close out hard and further expand the large cushion. Freshmen Van Vorst, Badura and Cassidy Deaver combined for 10 of SUNY New Paltz’s 17 points  in the quarter to get the lead past 40 to end the game.

“It’s just a great experience overall, especially for these freshmen coming in this was a great home SUNYAC weekend to start out with and Olivia Badura was really just killing it this weekend,” Van Pelt said. “She stepped up as a freshman and Lexi [Van Vorst], Maddie Gillis – we have a good freshmen class that is really stepping up this past weekend and it is just a great experience for everyone.”

Badura had a breakout weekend, surpassing Friday night’s season-high of 10 points and five rebounds with 14 points and seven boards in 25 minutes off the bench. Van Pelt was the catalyst, however, producing her typical high-energy night, but led the way on the offensive side of the ball. She confidently knocked down jumpers and worked her way in the paint to post her best offensive out-put of her career. She finished with 21 points in 21 minutes, shooting 9-for-12 from the field with a made 3-pointer to go along with an assist, two steals and a block.

“The problem with Maddie is that she is so good at fitting in and when she comes back from volleyball she just fits in seamlessly. Unfortunately, she is a better player than just fitting in,” Seward said. “Over the last couple years she has been great at doing that, but this year we were really adamant about making her not just fit in. Coming in and mixing things up, because we think she is very capable. I’m not surprised that she put 21 on the board. I think she can do that on any given night and really that is the main thing that makes this team tougher. A lot of people can do that.”

The Hawks have a long break until their next outing when they fly to Nashville to take on Simpson College and Rose-Hulman Dec. 29 and Dec. 30 to close out 2019.

To read the original story, click on the link! https://nphawks.com/news/2019/12/7/suny-new-paltz-womens-basketball-roll-to-40-point-victory-over-plattsburgh-state.aspx

Mon Dec 9 , 2019
By New Paltz Athletics Communication The State University of New York at New Paltz men’s and women’s cross country teams finished a historic fall with some great individual performances throughout championship season, culminating in a program-best finish on the women’s side at the conference and regional meet, while also seeing […] 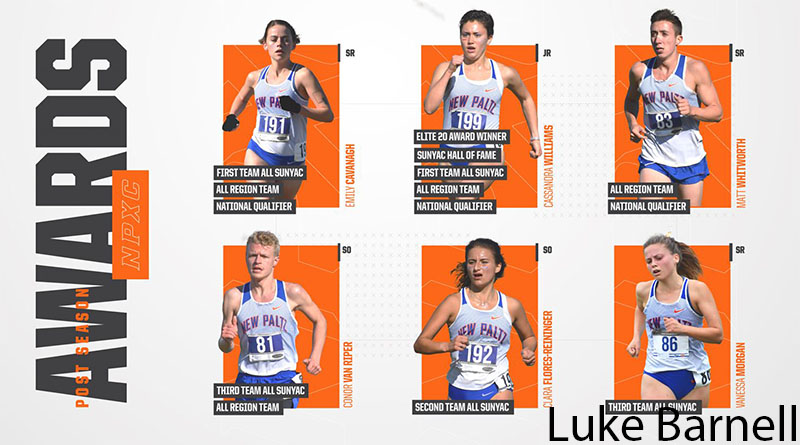