The State University of New York at New Paltz Women’s Volleyball team practice just ended and Kelsey Garmendia, a second-year student, is icing her shoulder to alleviate the excruciating pain. After practice, she often feels as if her shoulder is out of its socket. Initially being an internal impingement, the injury progressed into a more severe recurring partial labral tear. Unless she gets surgery, regularly trips to the rehab facility on campus will be necessary.

“It was hard to deal with,” said Garmendia. “The pain increased drastically throughout college and the injury got worse.”

Aside from being unable to compete athletically, students like Garmendia face additional hardships.

“Injuries do occur, but our understanding of when, why and how these injuries happen will help certified athletic trainers and the NCAA make participation even safer for student athletes in the future,” said Christopher Ingersoll, Ph.D, editor-in-chief of the Journal of Athletic Training, who helped compile the report.

The report also concluded that several sports showed a decrease in competition injury rates, including women’s gymnastics, basketball, spring football and field hockey. Sports involving contact and collision, such as football and wrestling, had the highest injury rates in both games and practices. Men’s baseball had the lowest rate of injuries in practice and women’s softball had the lowest rate in games.

SUNY New Paltz’s Assistant Athletic Trainer Michelle M. Johnson treats 50 to 75 students a day, depending on the season. She said that the most common injury is an ankle strain. According to Johnson, the varsity sports with the most injuries are men and women’s basketball, men and women’s soccer and women’s lacrosse. She also said women tend to tear their Achilles tendon more often than men, and men tend to have more serious shoulder and elbow injuries which often requiring surgery.

Johnson often uses ice to control pain, inflammation and muscle spasms. She uses heat to increase blood flow to an area and increase the elasticity of muscle. She tapes joints to add stability and also recommends exercise to regain appropriate range of motion to joints.

As far as reoccurring injuries go, Johnson said it varies from person to person.

“[It] can happen two to three times in a season or once every season. Ankle sprains and muscle strains are the most common reoccurring injuries,” she said.

In more serious injuries, the rehabilitation process is very strenuous.

Harper Jaroff, a fourth-year soccer player at SUNY New Paltz, was out for the 2009 season due to a broken first metatarsal, a bone located below the toe.

During rehab sessions, he did a lot of balancing exercises, cardio workouts, ice and heat treatments and electronic stimulation.

Sports injuries can also be very hard on students mentally as well as physically. Johnson said students are emotionally affected when they get injured.

“[The hardest part about being injured is watching your teammates compete and train and not being able to participate,” said Jaroff. “[It’s really hard] watching the team lose and being unable to help.”

Thu Apr 8 , 2010
“All media is selling you something, if not a product, then a lifestyle, or a vision of the way the world is,” said Sofia Quintero, author, filmmaker and activist striving to eliminate political biases in today’s media outlets. Quintero presented students and faculty with her lecture, “Women of Color in […] 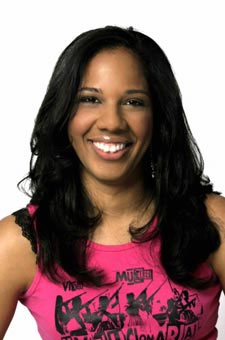