Despite the recession and wide availability of home movies, the art house film industry remains viable. Locally, there are several venues and even a new one being proposed.

Within a half-hour drive from campus, there are four such venues to watch independent, foreign, rare and historic films. Upstate Films is a business that shows these types of films. It was opened back in 1972 and now has two locations, Rhinebeck and Woodstock.  Upstate Films stands out among other theaters at the concession stand– instead of the traditional popcorn and soda, they serve locally-made brownies and apple cider.

For Upstate Films, membership offers savings. Anyone can attend the showings by purchasing full-price tickets, but members get discounts. The basic membership costs $45, which reduces the cost of tickets from $8.50 to $5. The most expensive membership costs $1,000 and comes with free admission for two to any show, free concessions, two mugs, two t-shirts, a handcrafted artist’s pin and a film nut chocolate bar.

The Rosendale theater is now showing My Week With Marilyn, a drama about the relationship between an assistant in the film industry and Marilyn Monroe during the shooting of “The Prince and The Showgirl” back in 1956.

Trailer: My Week with Marilyn

The Bardavon Opera House, located in Poughkeepsie, is the oldest continuously operating theater in New York State. It was built back in 1869 as the Collingwood Opera House and continues to present touring artists in theater, dance, music and opera.

Films are screened for their Friday film series and tickets cost about $8. The next film coming to the Bardavon is The Little Shop of Horrors and will be shown on Friday, March 16.

Now, New Paltz might get its own indie theater. The Water Street Cinema could be up and running by September 2013. New Paltz resident Howard Sachar plans to build the three-screen movie theater in the lot behind the yellow house on 12 Main St.

Sachar admired The Academy Theatre, a hub for art cinema in New Paltz back in the 1970s, as a source of vitality for the town. The theater was located where Barnaby’s Steakhouse now stands and brought people together for an important source of social education.

“I’m excited to bring that buzz, that feeling of vitality to the town again,” Sachar said.

Sachar and his business partner Chuck Silver plan for the theater to seat roughly 180, 90 and 45 people. Their focus is on education and the community. As well as screening films, the theater will have the capability to house live theater performances

The theater is proposed to be not-for-profit and mission driven. Although the theater is still in the beginning stages, many things could hinder the cinema from being built. Silver gave the proposal for the cinema to the New Paltz planning board last week but will need help and feedback from the community to get it up and running.

Public Relations Director for the Water Street Market Theresa Fall started Mondays at Dusk, an event where a projector and screen were set up to display movies in front of the Antiques Barn in the summer. The season goes from June to August and free popcorn is served. Though the Water Street Cinema is proposed to be built, Fall plans on continuing the Mondays at Dusk program for the community spirit.

She believes that the Water Street Cinema could potentially bring a new set of tourists to New Paltz and increase local business.

“We’re thrilled about it,” Fall exclaimed.

Thu Mar 8 , 2012
To the average college student, a diet that bans beer, pizza and potato chips may sound unappetizing. But what if by steering clear of certain foods you could avoid cancer, diabetes and heart disease? According to Robb Wolf, an expert in Paleolithic nutrition and author of The Paleo Solution: The […] 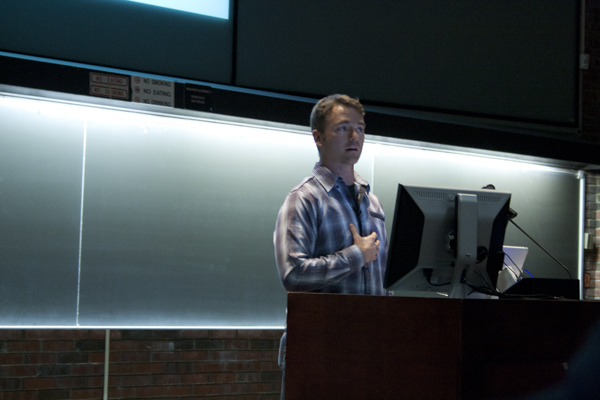