How do you decide if your date will be a short fling or something more serious? Would you marry the life of the party? Do pheromones have a hidden role in attracting a potential partner?

These are some of the questions about human mate selection and strategies that psychology graduate students Ari Freuman and Grant Trouton asked in their human subject research projects, “Is He a Husband or a Hook-Up?” and “Pheromone Communication T-Shirt Experiment,” respectively.

Both studies were conducted as independent research within the Evolutionary Psychology Lab of SUNY New Paltz, led by Glenn Geher, professor and director of the Evolutionary Studies Program and chair of the psychology department.

“Some work, I can just see immediately that it will be publishable,” Geher said. “These studies have the potential to shed new light, to ask questions that have never been asked and provide brand new information.”

“Is He a Husband or a Hook-Up?” asked female participants to judge if a male involved in typically risky or exhibitionistic behavior such as skydiving, smoking cigarettes or having tattoos, or a male involved in typically low-risk behavior such as playing a musical instrument, cooking or writing poetry, would make a better short or long-term partner.

Participants were also asked questions regarding their personal relationship history, contraceptive use, sexual orientation and ovulatory cycle. More than 500 respondents provided feedback to the anonymous online survey, which was advertised via an all-campus email, Freuman said, but only about 250 students fully completed it.

Freuman said his study builds upon prior research conducted by psychologists Maryanne Fisher at St. Mary’s University and Daniel Kruger at University of Michigan-Ann Arbor. According to Freuman, Kruger and Fisher were interested in whether females have a natural understanding and preference when it comes to males who pursue either a short-term (hook-up) or long-term (husband) strategy.

“While these were excellent preliminary studies, they lack certain types of scientific validity that would ultimately allow for one to affirmatively cite this phenomenon.” Freuman said. “My study will add validity, as well as allow one to better parse apart what ultimately predicts whether a male is likely to be considered a husband or a hook-up.”

One participant’s response to the “Is He a Husband or a Hook-Up?” survey was mixed.

“I thought it wasn’t a good basis for surveying people on hook-up or husband because it was so broad. It was not a good indication of what a good hook-up or husband is,” said a second-year environmental geoscience major, whose name has been withheld due to the confidential nature of the survey.

“Your first intuition about someone is not always a good indicator on what a person really is,” the student said. “You should judge someone on their character traits, not their profession or hobbies. The survey was too simplistic. But I thought the overall idea of the study was interesting and intriguing, and I liked the personal questions at the end.”

Trouton said the idea for the “Pheromone Communication and T-Shirt Experiment” study first came to him last year during an animal behavior biology class, when the professor mentioned a study found men consider the scent of a woman to be more pleasing while she is most fertile.

“This finding helped elucidate the argument that female ovulation is not a hidden event, but rather that women and men communicate reproductive state to each other via chemical signals—pheromones,” Trouton said.

For this study, student participants of both genders were asked to sleep in a researcher-provided cotton t-shirt for six nights. Trouton expected about 35-50 women and 50-60 men to participate. He said each t-shirt would immediately be frozen for storage once it is returned from the wearer. After all of the t-shirts have been collected, they will be thawed. Independent “sniffers” will then open the bags without touching the shirts, sniff them and rate the smell of the shirts based on the criteria of pleasantness, intensity and sexiness. This study’s methodology is based on past t-shirt experiments, such as conducted by Devendra Singh and P. Matthew Bronstad in 2001.

“Human pheromones undoubtedly exist, and the evidence for their existence is rapidly accumulating,” said Trouton. “The main question, however, seems to be to what extent do they influence behavior?”

Trouton said the t-shirts, the last of which was distributed Feb. 15,  will be collected from participants until March 17 and t-shirt ratings will then begin after students return from spring break. Trouton and Freuman will both present their findings at the Northeastern Evolutionary Psychological Society conference at Plymouth State University in April.

If you would like to know the outcome either study, or for information, contact Ari Freumen at Freuma65@newpaltz.edu or Grant Trouton at n02508698@hawkmail.newpaltz.edu.

Sun Feb 26 , 2012
The New Paltz Hawks saw their season end on Tuesday, Feb. 21, with a playoff loss on the road to the Oswego Lakers. The Lakers, who are ranked 14th in the country and first in the State University of New York Athletic Conference (SUNYAC), defeated the Hawks 73-62. They were led […] 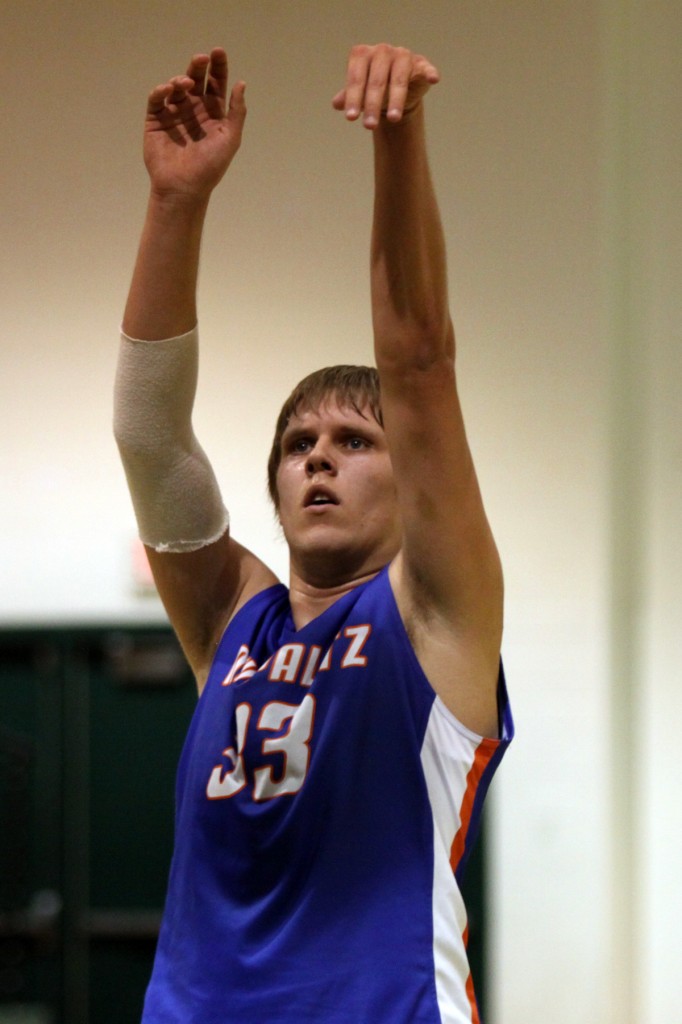