I ran out the door into the summer night, the smell of gasoline reeking from  our ’97 Toyota Corolla. My father had stopped to work on its breaks while he brought my dog on a walk.

“I always tell him to put her on a leash,” I turned and said to my brother. “Dad never listens.”

I could hear the echo of her name as we searched the street. She was a small dog, a toy poodle with apricot hair like mine.

I finally saw my father’s figure coming toward me, cradling something.

“She’s dead,” he said, like he had every other time he forgot about her. It was a joke he liked to play.

I pried on his arm in disbelief. “She’s dead, Charlene!” he shouted. This time, he was serious.

It didn’t hit me until the next morning. I woke to sun shining in my bedroom window, but my heart felt heavy.

I walked into my living room to find my father kneeling beside an Omaha Steaks container.

I stepped closer to see Coco’s carcass nestled inside it. She was wrapped in an old towel and tied into a plastic bag, the kind you put tomatoes in at the grocery store.

There were also two notes, one addressed to anyone who may unbury her if we move, and another addressed directly to her.

approached the foam container to confront the fact that my pet was dead, but my father thrusted his palms in the air and yelled to leave him alone. So, I backed away.

I watched my father kneel down and kiss Coco’s body, his tears streaming down his stubble as he repeatedly apologized to my dead dog.

It was hard to decide which was more appalling: seeing Coco in an Omaha Steaks container, or seeing my father on his knees.

Some time the next week, Jason Ruzi, the boy who lived across the street from us, had a conversation with my father. “When I was on the bus, I heard Anthony saying that his friend shot a dog over the weekend,” he had said.

He was referring to Anthony Riffuno, the neighborhoodtroublemaker. My father had found Coco outside the Riffunos’ house.

Four years later, I sat in the passenger seat of my friend’s car with Darrel Loew and Mark Odenchab, two kids we had gone to high school with. We eventually got to talking about pets.

“What? Who would shoot a dog?” Darrel had asked.

“He was a friend of a guy named Anthony Riffuno,” I answered.

“Wait… ‘Dirty Tony?’ I know him…” He had sounded intrigued as he turned to Mark and nudged his arm.

“Yea, well he’s a jerk,” I said, and we changed the subject.

The following summer, my mother went into the hospital. Our insurance would only cover legitimate emergencies, verified by a doctor, so it took a while for my father to bring my mother in.

It turned out that my mother had to have emergency surgery on her appendix and gall bladder. My grandmother was not happy.

“You waited too long!” my grandmother yelled, as we sat by my mother’s hospital bed. “You never take things seriously.”

My father tried to explain the insurance situation, but failed.

“Well, you did kill Coco,” my grandmother said, savagely trying to prove her point.

She had spoken words that nobody ever uttered in front of my father before. His face assumed an expression I had only seen once, the day we buried Coco in our backyard.

“It was my fault,” he admitted, choking on the lump in his throat, “but I did not kill her.” He looked out the window of the New York Presbyterian Hospital. “It was that Odenchab kid.”

My left eyebrow kinked at the sound of his name.

Check out the individual posts:

Next Day Air by Malcolm Harper

Carry On by Eden Hausdorff

You Can Go Home Again by Julia Amberg

Thu Oct 6 , 2011
Pick a pumpkin, pet a goat and celebrate food “from farm to fork” at the Taste of the Catskills Fall Fest, Saturday Oct. 8 and Sunday Oct. 9 at Maple Shade Farm in Delhi. The festival showcases regional and seasonal food, as well as wine and beer. The cost of […] 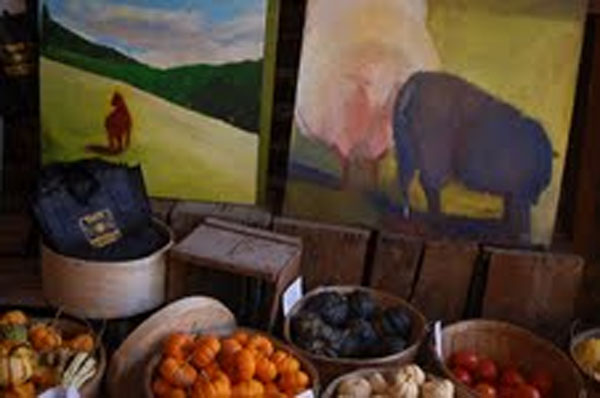