After following the winding driveway to a warehouse that seems fit for either a kick-ass rave or an installment in the SAW series, you’ve reached Tiger Piss’ practice space. Inside this murky musicians’ hideaway are random relics of what used to occupy the space: wheelchairs, tractors and old time-clocks. Among this is “Rev Kev’s” drum set, completely assembled, resting on multi-colored rugs. It’s hard to decide whether the set looks completely out of place or right at home.

Drummer Kevin Sharp, guitarist Danny Asis and singer/bassist Lara Hope, the members of Tiger Piss, say they are a hometown band that thrives and survives off friendship, music and beer. However, the male members of the group, together for over three years now, jokingly attributed “Lara’s breasts” as the reason for the good group dynamic. Though bandmates said the real reason for their success can be attributed to their varying personalities and ages, Hope’s pin-up look topped with bright red lips likely doesn’t hurt.

Asis said each member of the three-person wrecking crew plays a unique part in their musical family.

“We all have different roles in this band and it’s interesting because it was never talked about, it just developed that way,” Asis said. “I basically come up with the music, bring it to Kevin who helps arrange the songs to make more sense rhythmically, then Lara comes up with a bass line and lyrics.”

Tiger Piss’s fun loving vibe results from their outrageous, yet wildly entertaining lyrics. The track “Zombie Slave” off their first EP entitled Ear to the Wall is a fun song for both the band and the audience, with lyrics about a submissive lobotomized boyfriend urging, “Come with me you’ll be saved, I’ll stick with you to the grave. I’ll make sure that you behave, you’re gonna be my zombie slave!”

Based out of New Paltz, N.Y., Tiger Piss has developed a local cult following particularly at Snug Harbor. It is here that faithful patrons happily fill pitchers for the band shouting out every lyric. The hardworking group, which pays for all of their touring, merchandise and album production themselves, is working toward getting more gigs and longer tours.

“Our goal is to get to the point where we can make enough money to stay on the road for longer than a few weeks,” said Sharp. Tiger Piss, which actually is slang for a very strong Vietnamese beer, has not made it to Vietnam yet; however, they recently returned from a two-week tour through the south, playing several shows in 14 days. Some of the stops on four different Tiger Piss tours have included Georgia, North Carolina, Florida, Tennessee, Texas, Wisconsin, Pennsylvania and Connecticut.

“It’s very rewarding to put that much effort into something and be to show it off in front of a crowd of people.” Sharp said. “It’s nice to have people watch us and get to realize how passionate we are about it.  It’s even better when they start to share that enthusiasm- which seems to be happening more and more often lately.”

However, touring hasn’t always been easy for Tiger Piss. Building a fan base on the road can prove to be a challenge, but one that Asis said the band welcomes.

“It’s a feeling incomparable to anything else. I like the rush of not being sure exactly how the crowd is going to take us, like when were on tour and playing a place we’ve never been, to people that have no idea who or what were about,” he said. “It’s really hard, but also invigorating to try to win over a crowd of complete and mostly judging strangers.”

Tiger Piss has experienced the best of both worlds in this regard, sometimes playing for almost non-existent crowds on Tuesday nights, being forced to entertain themselves while maintaining an upbeat spirit. Conversely, the bandmates have also had the experience of unknowingly stepping on stage to a crowd full of eager fans in places they never knew they had a following.

“The second time we went back to Yesterday’s in Wheeling, W.V. about 40 or 50 people came out to see us on a Wednesday night,” recalled Sharp. “There were about a dozen or so people right up front that knew every word to all of the songs on Shake it, Don’t Fake It.”

Tiger Piss draws inspiration from a plethora of artists including Fiona Apple, Metallica, Joan Osborne and Michael Jackson; however, the group manages to maintain a sound and vibe all their own. In three short years they’ve produced two EP’s all while building a unique name for themselves. According to members of the group, Tiger Piss will continue to find success so long as they continue to feed off of each other’s energy.

“My inspiration, as cheesy as it sounds, are my bandmates,” Asis said.

Wed Apr 14 , 2010
Glenn Geher moved briskly around the room as students clicked furiously at computer stations, their brows furrowed in determination. He made his way through the crowded tables, assisting each student and offering advice until the room cleared out. The last transfer student remaining was still attempting to craft a workable […] 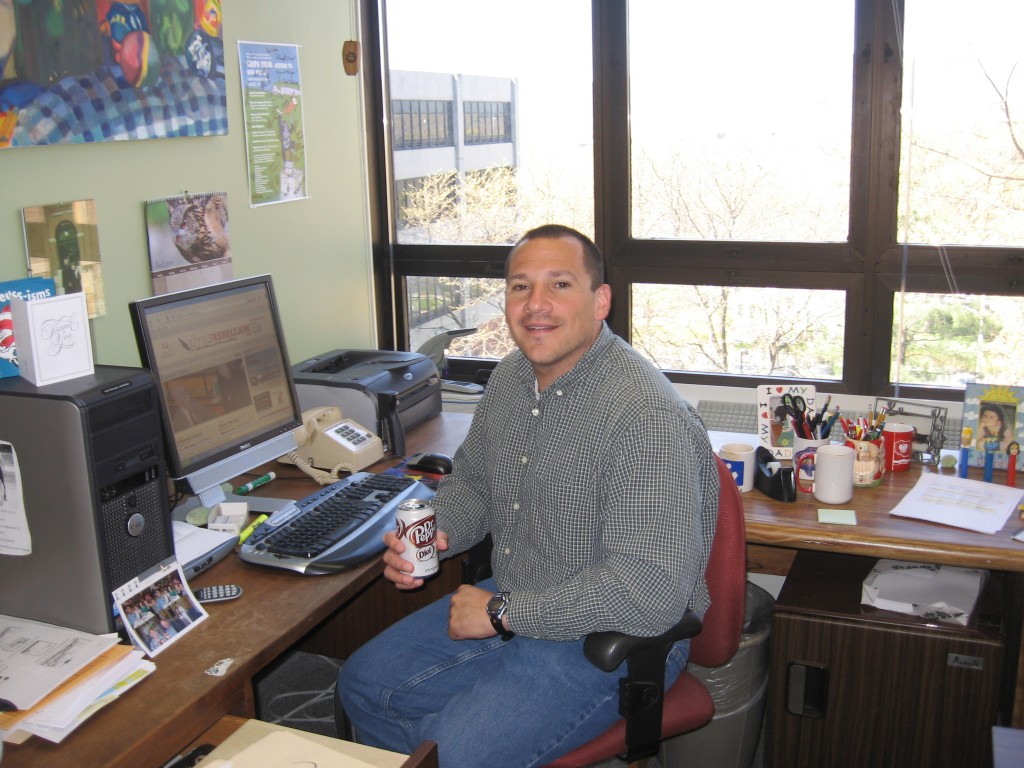