Caitlin Langone, recent SUNY New Paltz alumna and English major, was featured on the documentary “Children of 9/11,” which aired on NBC Sunday, Sept. 4, 2011. The documentary was a focus on the children, who are now adults, that have been affected and are still being affected by what happened on that terrible day in 2001. Caitlin, who was only 12 at the time, recounts that her father always told her mother that if anything happened him, it wouldn’t be a phone call, someone would come to the door in person to tell them the news of the accident.

Her father, Tommy Langone, was last seen ferrying people to safety on the 20th floor of the south tower. Langone struggled with the fact that her father was no longer with her In the documentary she said, “I can’t turn around in this house without seeing a picture of him in the room and thinking about what I don’t have now.” Like most 9/11 victims dealing with the aftermath of these acts after 10 years, her story is relatable and touching.

Although it has been a decade, Caitlin and her mother are still brought to tears watching home videos of their father and husband. Caitlin said, “Even when he speaks its like … I can’t get my head around him not being there.”

Caitlin and other children affected by that act of terrorism recounted their experiences dealing with grief and living without their loved ones. A film crew shadowed Caitlin in her fourth year until graduation. Langone hopes that this documentary can help other victims cope with grief of the tragedy that still affects them 10 years later. 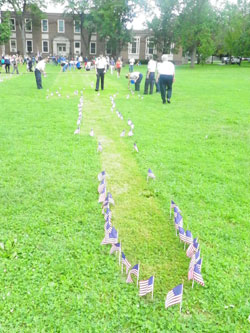